Dromahair are on the march says captain Michael Clancy 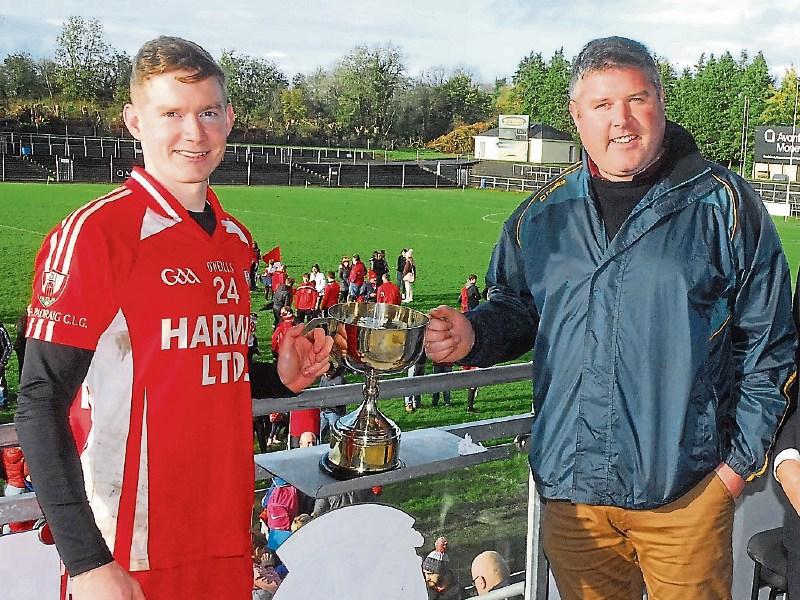 Winning the Mens and Ladies Intermediate titles may only be the start of it for St Patrick’s Dromahair. Certainly, that the impression captain Michael Clancy gives after he lifted the Frank Reynolds Cup following Dromahair’s victory over Ballinaglera last Sunday.

“It is huge, the whole club is pushing on,” stressed Michael, “The Ladies won the League and the championship this year, the double, it is amazing, we’re winning there at underage, our Junior team is in a final next weekend, there is a great buzz about Dromahair. It has been a long time coming, we’ve been building to this and this year it has come.”

With a smile from ear to ear on his face, you didn’t really have to ask Michael how he was feeling! “I’m absolutely beaming, especially after a battle like that. It was shaky near the end but it is an amazing feeling and such a bunch of lads to be here with is unreal.”

The Dromahair captain felt that his team controlled most of the game but crucially didn’t panic when Ballinaglera got their goal: “We kept control, I know in the semi-final we kept control too. Thank God, we’re a team this year that doesn’t panic and we didn’t panic today. I think we were in control but it was definitely a tough game and I’m feeling it now.

“I’ll tell you one thing, our whole team has massive confidence in our full-back line and they came out with the ball every time and that gave us a boost. We had a high press there but to be fair to Ballinaglera, they weren’t letting us build up momentum there either.

“It was a kind of a stop start game which isn’t always great for the spectators but I know near the end the Dromahair spectators might have had their hearts in their mouths but Ballinaglera pressed on us and didn’t let us get momentum so hats off to them.”

As for lifting the Cup, Michael said it was a great feeling; “You are thinking a lot more when you are captain but thank God I had the bunch of lads I did to do the work for me today. I had great confidence in them. It is an amazing feeling but it is an honour and a privilege to be honest with you for that bunch of lads.”