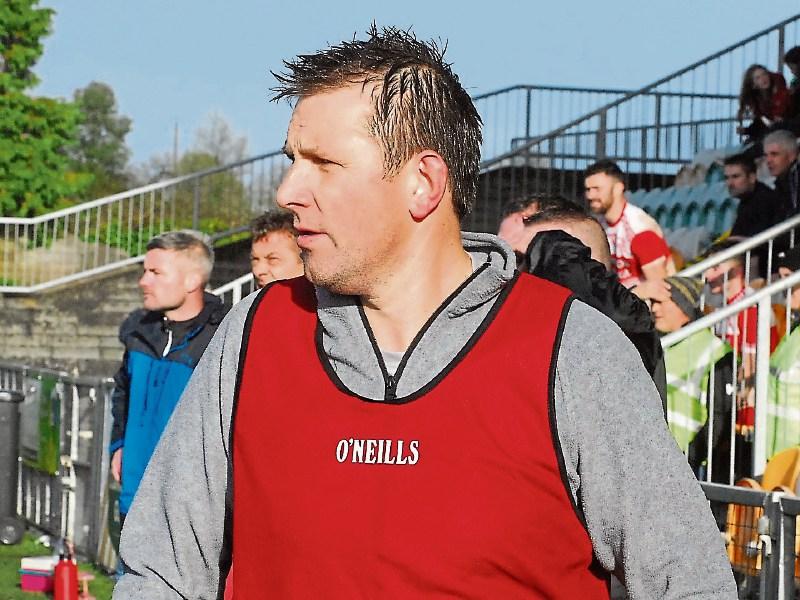 Defeat may have ultimately been their lot but Ballinaglera’s players deserve the highest of praise according to their manager JP Kane who stressed after Sunday’s Smith Monumentals IFC loss to Dromahair that his players couldn’t have given any more.

Speaking after the game, JP revealed that ambition burns bright in this Ballinaglera team: “I met the boys last April, probably five and a half months ago and I said I wanted to win an Intermediate championship and they probably looked at me as if I had two heads. They grew into my philosophy of how I wanted to play football, they got fit, those lads gave me 120%.

“I know Dromahair won the Intermediate championship and Ballinamore won the Senior but I don’t think any team trained as hard as us over the last eight weeks. We were doing serious training, unbelievable training. It wasn’t to be on the day and it is as simple as that, Dromahair deserved to win.”

Ballinaglera’s march to the final was one of the fairytale stories of the Leitrim GAA year and JP thanked the local community for the way they got behind his troops! “It was unbelievable, these people haven’t been there in 25 years and I heard Padraig Clarke, our captain, saying that the last time they won it, he was a baby.

“Today, there probably wasn’t one person left in the parish. I went down this morning to meet a couple of players and go through stuff with them and there were people out on the road, waiting for us to go by going to Carrick. It just meant an awful lot to them.”

Unfortunately, the Ballinaglera manager sees an uncertain future with no guarantee his team can kick on again: “You don’t know what will happen in the future, that Intermediate championship is tight, it is hard to regroup again and go again and some of these lads like Colm Maguire might never be back again.

“Definitely it has brought on the club a lot and somebody said to me before the County Final that whatever you’ve done, we’re in bonus territory now, nobody thought we could get to a County Final.”

Looking back on the game, JP said that Ballinaglera were happy going in at halftime only trailing by four points after playing into a strong wind but his charges were unable to press on in the second: “There was a gale force wind and we knew that every team gets a purple patch. We kept in the game, we did everything to stay in the game.

“We were happy enough going into the dressing room at halftime only four points down after facing that wind. We never got going with the football we wanted and you know this time of the year, when you go three or four points down it is very hard to claw it back.

“But we stuck at it, stuck at the game plan, we never went away from it. We got the goal from a penalty and it looked as if there was only going to be one winner at that stage and that was us. We kicked two wides, we dropped two balls in on the day they’d normally have stuck to Enda’s hands, they didn’t today.”

JP also credited Dromahair’s pressing game but stressed it was a tight contest: “Dromahair probably deserved it but I think we were very, very close. They pressed us, I think the first half when it was six-two, five points came from the press that made us make mistakes.

“It wasn’t that teams didn’t do this before but we could always get back, regroup but they put ferocious pressure on us inside the 14 yard line. The wind didn’t help either but didn’t help the flow of the game either.”

As for the future, JP points how far Ballinaglera have come this year: “We’ve come on an awful lot this year, I’m only five months with this team and we’re in a County Final. Everyone had wrote us off at the start of the year, saying us and Bornacoola would be the teams to struggle but we are in a County Final and with the rub of the green, it could have gone our way but it didn’t and that’s the frustrating thing about it.

“It is back to the drawing board for these lads and probably a lot of these lads, it probably could be their last game. It is tough on them today but they have to go at it again, whether it is with me or someone else, we’ll have a look at that over the winter.”

John Connolly chats with JP Kane and finds that while the Ballinaglera manager is eager to embrace the underdogs tag, he is full of belief that his team can lift the title next Sunday!
ADVERTISEMENT - CONTINUE READING BELOW