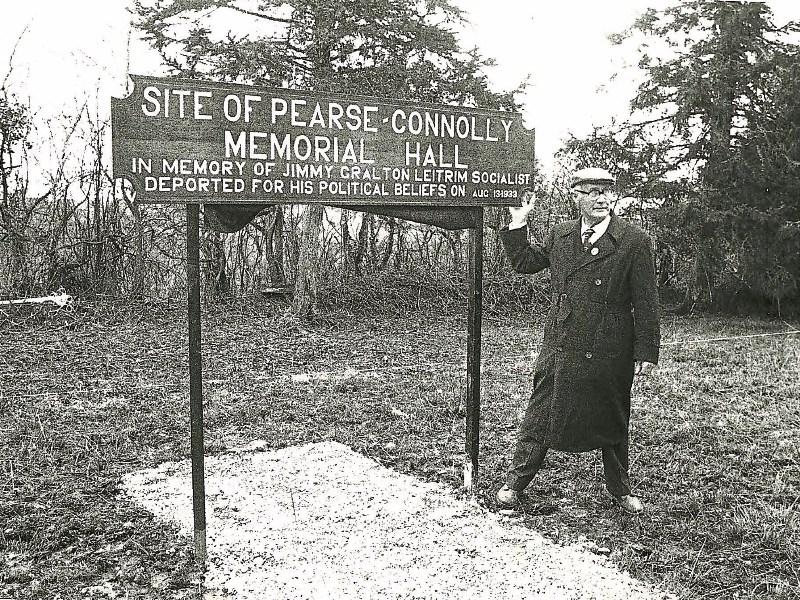 Large numbers are expected to assemble at the site of Gralton's “Pearse Connolly Hall” at Effrinagh, Co Leitrim, on Saturday morning next (3rd Sept) when President Michael D. Higgins formally unveils a monument to the memory of the famous Leitrim Socialist Jimmy Gralton.

Due to significant parking limitations and planned traffic restrictions, members of the public have been advised to give themselves adequate time to arrive early. Initial proceedings will commence at 10.45. a.m. on Saturday morning.

Members of Leitrim County Council, Oireachtas members, political activists and a number of leading trade unionists are expected to be present for the occasion.

The General President of SIPTU Mr Jack O'Connor, the President of the IMPACT Trade Union Mr Pat Fallon, the General Secretary of the Communist Party of Ireland Mr Eugene McCartan and Professor Luke Gibbons have already accepted invitations to attend.

Mr Jim Gralton, a cousin of Jimmy Gralton said “this will be a very special and proud day for all the members of the Gralton family. When my late parents, Maggie and Packie, witnessed Jimmy's dreadful deportation back in 1933 little did they think that 83 years later the President of Ireland would be unveiling a monument to his memory. We are most grateful to the President and to all who have helped to make this day possible.”

The Secretary of the Gralton Labour History Commemorative Committee Cllr Declan Bree, said “Thirty years have passed since we first assembled at the site of Jimmy's Hall in 1986 to pay tribute to his memory.

“Quite a number of those who were involved in organising events then and in the intervening years have passed on and we will also be remembering them when we assemble at Effrinagh at the weekend. President Higgins has kindly agreed to plant an Irish oak tree to honour their memory.”

In addition to the formal unveiling many other events will be taking place over the weekend. Edwina Guckian will be organising music, song and dance. Peter Cowman of the Living Architecture Centre will be displaying a scale model and drawings of ‘Jimmy’s Hall’.

Following the screening of a documentary on the Gralton affair on Friday night, Michael McLoughlin and Marion Quigley will be performing a one act Play. On Saturday afternoon Ms Nula Suchet will speak on the “Life and Times of Noel Browne”, and Ms Gerri O'Neill will be speaking on “Jimmy Gralton, Red Scare and all that jazz.”