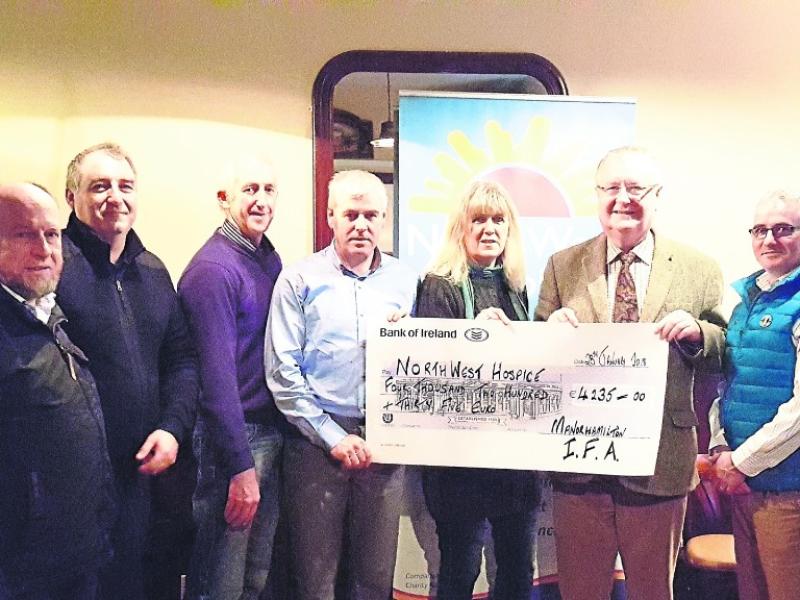 The fifth annual Manorhamilton IFA Tractorcade on New Year’s Day was again another very successful event and apart from the excellent participation in it by members of the local farming community, the Tractorcade raised a whopping sum of €4,235 for the North West Hospice.

During the ceremony a cheque for €4,235 was handed to Mary Forte, the North West Hospice Community Manager.

Speaking following the presentation Ms. Forte, who attended the Tractorcade on New Year’s Day, stated she was hugely impressed with all the tractors and their drivers with family members that participated in the event on Monday, January 1 2018.

She also indicated that it takes one million euro annually from local charity contributions to run the North West Hospice and provide its services to the terminally ill.

The North West Hospice also receives another one million euro from the HSE in matching funding, which along with its terrific charity contributions, are needed to keep it operating successfully each year.

Leitrim IFA Chairperson, James Gallagher during his speech at Sunday night’s presentation ceremony paid tribute to the Manorhamilton IFA Branch for the marvellous work it did in organising the Tractorcade.

Mr. Gallagher also remarked that there was hardly a family in the area that did not at some stage or other in their lives need to avail of the marvellous service that the North West Hospice provided. He wholeheartedly praised North West Hospice for the great work it was doing for local people when they and their families urgently needed their services.

Manorhamilton IFA Chairperson Ian Cullen thanked all involved with the organisation of the 2018 New Year’s Day Tractorcade. He extended the Manor IFA’s deeply felt gratitude to Manorhamilton Mart and its owners, the Moffitt Family who have facilitated the Tractorcade event in every way possible, every year since it started five year’s ago.

Ian Cullen also thanked the Leitrim Observer for its assistance with the promotion of the Tractorcade event. In this regard he also expressed grateful appreciation on behalf of the IFA to Francie Boylan and Ocean FM.

Ian Cullen also expressed his gratitude and that of Manorhamilton IFA Branch members to everyone who contributed to the Tractorcade fundraising North West Hospice collections on the day and afterwards since New Year’s Day.