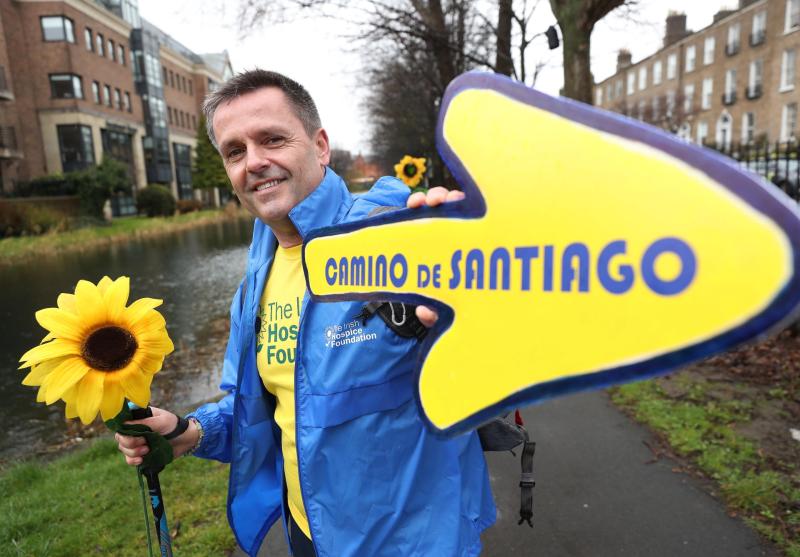 Leitrim walking enthusiasts, broadcaster Aengus MacGrianna wants you to make every step count for end-of-life and bereavement care this September by walking the Camino de Santiago in aid of the Irish Hospice Foundation (IHF).

This year’s IHF Camino takes place from September 9- 15, taking in the most famous Camino route, the French Way. Starting in Sarria, the route stretches 112 km, winding through the beautiful Galician landscape dotted with charming villages, hamlets and towns and finishes in the historic city of Santiago de Compostela.

“Death and bereavement hits every town and village across Ireland,” he says, “I’ve seen how end-of-life care helps people live their last days with dignity so I’m delighted to support the Irish Hospice Foundation.”

One of Ireland’s most recognisable faces, the former RTÉ newscaster signed off on his last bulletin in March after 31 years with the National Broadcaster. The Dublin native completed his own journey across the Camino recently.

The IHF is the only national charity dedicated to dying, death and bereavement in Ireland.80 people die every day in Ireland and the IHF believes everyone has the right to be cared for and to die with dignity and respect in their care setting of choice. Its mission is to strive for the best end-of-life and bereavement care for all.

Sharon Foley, CEO of the IHF, will be among the participants on this year’s IHF Camino, “By joining us on the Camino, you will be embarking on a personal challenge but through our own efforts, you will also be supporting people nationwide who are facing death and bereavement. Our vision at the IHF is that no one should face these difficult times without the care and support they need. This is your chance to make every step matter for end-of-life and bereavement care for people across Ireland.”

If you want more information about taking on the IHF Camino, please contact Louise today:louise.mccarron@hospicefoundation.ie or 01 6793188.