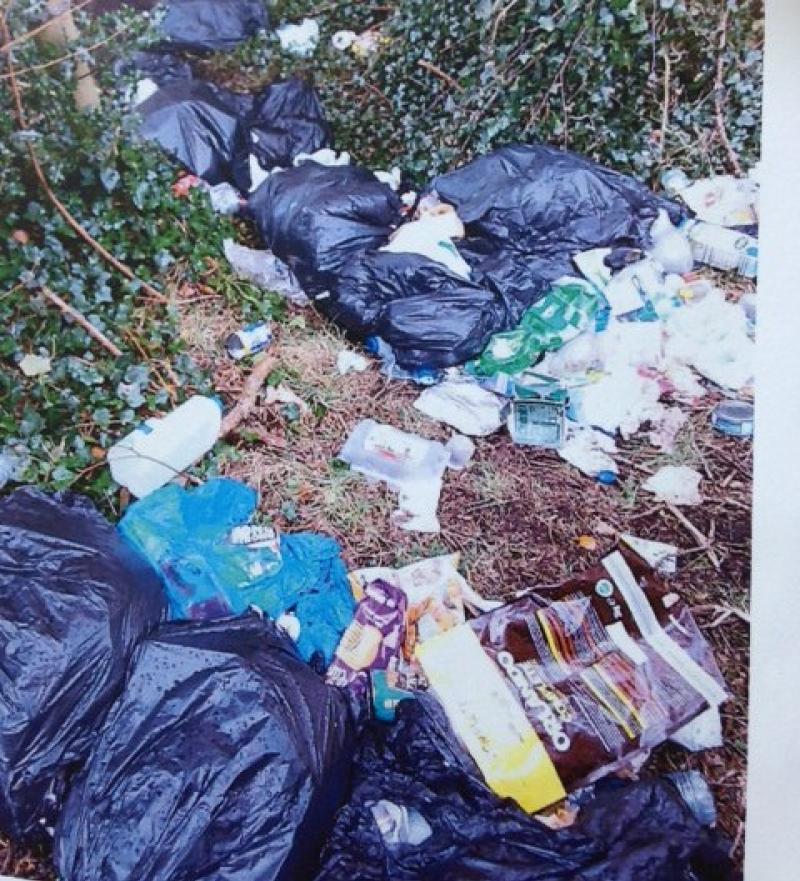 The photo which the judge held up in court to show the dumped rubbish in a beauty spot in Leitrim.

Judge Kilrane said unemployed McGowan, 28-year-old father of one, was oblivious of normal standards of duty to society.

McGowan, of Oak Grove, Kinlough ,Co. Leitrim, admitted dumping domestic refuse between February 18 and March 8 in the River Drowse on the Leitrim side of the border with Co. Donegal at Four Masters Bridge at Rosfriar outside Kinlough. He also admitted creating litter likely to cause environmental pollution.

The court heard there were 13 dumped bags but the only identifying evidence was in one bag – a pharmacy document that identified McGowan.

Solicitor Frank Geary, prosecuting on behalf of Leitrim County Council, said McGowan admitted dumping one bag of rubbish a year earlier, but the pharmacy document that identified him was dated last February 18.

Judge Kilrane, displaying a picture in court of the dumped rubbish, said: “All the bags look the same.”

He told the defendant: “Just take a look at that filth in a salmon and trout river in a scenic area. Would you dump that in the back of your garden?”

When told by McGowan that he last worked two years ago but he couldn’t recall when he last worked for a full week’s wages; the judge said: “Why should this man not go to prison? He never apparently worked in his life.

Judge Kilrane added that the defendant owed an apology to the people of the area and the county of Leitrim.

Defence solicitor Florence Hutchinson told the court that McGowan was moving to a rented house when he dumped a bag of refuse in the river because he was without a refuse service.

Michael Reynolds, Leitrim County Council community warden, told the court McGowan was co-operative in the investigation; he admitted dumping one bag a year earlier but the identifying pharmacy document indicated a much later dumping date.

Mr Reynolds said there was no land-fill in Co. Leitrim. That was why there were bye-laws to persuade people to use the bin service.

He said the clean-up costs in the offences involving McGowan were about €500 and the legal costs of the prosecution were similar.

The judge adjourned the case to November 2 and ordered McGowan to have €2,000 with him on that day. He told Ms Hutchinson that if the money was not in court she should advise her client what was going to happen.