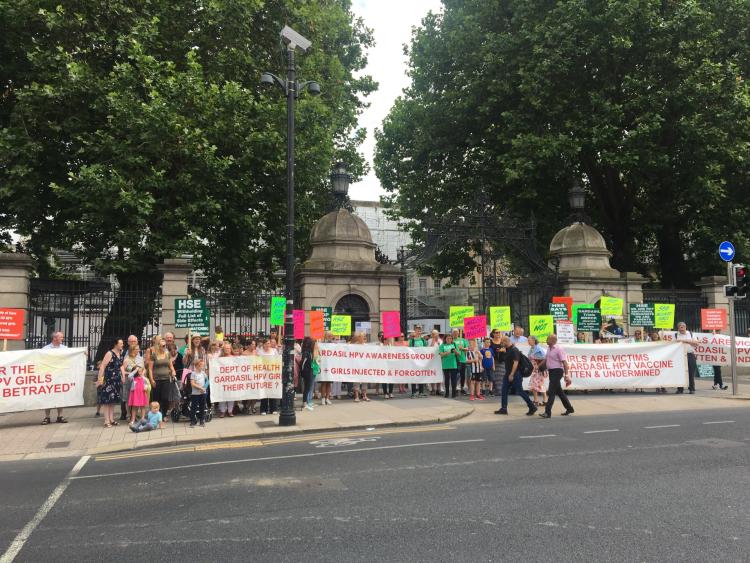 A group of concerned parents and children from Leitrim joined about 200 protesters outside Leinster House yesterday, Monday July 9 to highlight ongoing concerns over the HPV vaccine.

The inventor of the vaccine Professor Ian Frazer was in Dublin being presented an honorary fellowship by Royal College of Physicians for his work in developing the vaccine.

Dozens of families in Ireland have claimed that the vaccine has led to negative health effects in their children, while medical experts dispute any long-term side effects of receiving the anti-cervical cancer jab.

Drumshanbo's Sean Wynne has called on Simon Harris and the new head of the HSE to establish some form of a compensation fund for those allegedly affected.

The HSE responded to the protest by saying it flies in the face of best available medical and scientific evidence – including the World Health Organisation.

Minister for Health Simon Harris has “ensured extra resources are being deployed to work intensively" on introducing a new  HPV test by the end of the year following the cervical cancer screening crisis.

In Australia, testing for the human papillomavirus (HPV) is already in place and was introduced because of the success of the cervical cancer immunisation programme. It is expected to eradicate the virus by 2028 from all but those who recently immigrated into Australia.

The vaccine, Prof Frazer says, protects against nine strains of virus which are together responsible for more than 95% of cervical cancers. In Australia it is given to both girls and boys. Most countries are switching to using HPV testing if they can afford it. “It’s slightly more expensive than the pap smear but it’s much more reliable,” said Prof Frazer.

Vaccination rates in Ireland dropped alarmingly to 50% after concerns about damaging side effects. A recent HSE awareness campaign improved the rate to more than 60%.

Prof Frazer said there was a one in a million incidence of a significant allergic reaction to the vaccine and in Australia “that amounted to two cases in the whole of the last 10 years and worldwide there’s been about 17 or 18 reported. And that’s an unpredictable allergic reaction, about the same you get with almost every vaccine.”