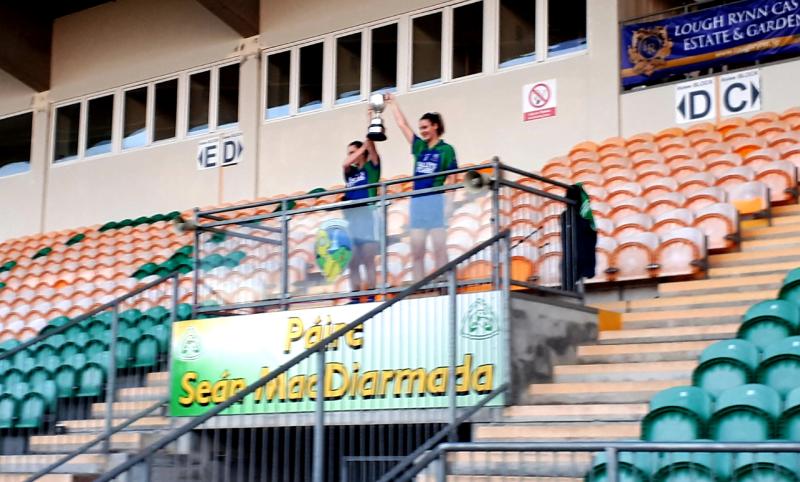 It proved to be a rather cagier first half than you would have expected given the attacking strengths both sides possess.

In terms of possession St Josephs bossed matters during the opening half but in terms of quality chances, it was Glencar/Manorhamilton who were well in front in that regard.

However, converting those chances proved to easier said than done as four excellent goal chances were spurned during those opening 30 minutes. While Leah Fox and Muireann Devaney both saw great oppotunities come to nothing, St Joseph's goalkpeeper Kiera Masterson deserves great credit for keeping the Manor forwards at bay.

In fact Glencar/Manorhamilton's only score of the first half was a 17th minute free converted by Muireann Devaney.

At the other end of the pitch St Joseph's looked more effective when attacking. The midfield duo of Aine Heslin and Clare Owens were effective at driving forward when Glencar/Manor opted to retreat.

Carmel McGovern, another to have an excellent first half, opened the scoring inside two minutes and the impressive Deirdre Moran doubled the advantage in the 7th minute of what was a cagey affair.

After Glencar/Manor registered their opening score St Joseph's hit back with points from a Bronagh O'Rourke free and with four minutes of the half remaining Deirdre Moran struck decisively for the game's opening goal and she added to that score with a late point to give her side a 1-4 to 0-1 interval lead.

Manor re-emerged from the dressing room with renewed focus and registered the first score of the half courtesy of another Muireann Devaney free.

However, St Joseph's had the perfect reply as they struck for their second goal shortly afterwards with Ciara Maguire finding the net with a speculative shot.

The opening 10 exchanges were full of action and it didn't take long for Glencar/Manor to hit back with Siobhan Feely finding the net to reinvigorate the Manor challenge.

However, the momentum brought by that goal didn't last long as St Joseph's hit back with their third goal barely a minute later, once again scored by substitue Ciara Maguire.

Glencar/Manor refused to throw in the towel but they were unable to match the experience that St Joseph's brought to the occassion.

A Muireann Devaney goal reduced the deficit to four points with over a quarter of the game still to play and it seemed as though all present in Pairc Sean were in store for a grandstand finish.

Despite their best efforts Glencar/Manor were unable to fight their way back into contention with St Joseph's able to keep them at arms length for the remainder of the game.

A flurry of points from Bronagh O'Rourke, Michelle Heslin and Carmel McGovern towards the end put the gloss on a deserved win for St Joseph's.

For a full report, reaction and pictures from this evening's final don't miss Wednesday's Leitrim Observer.