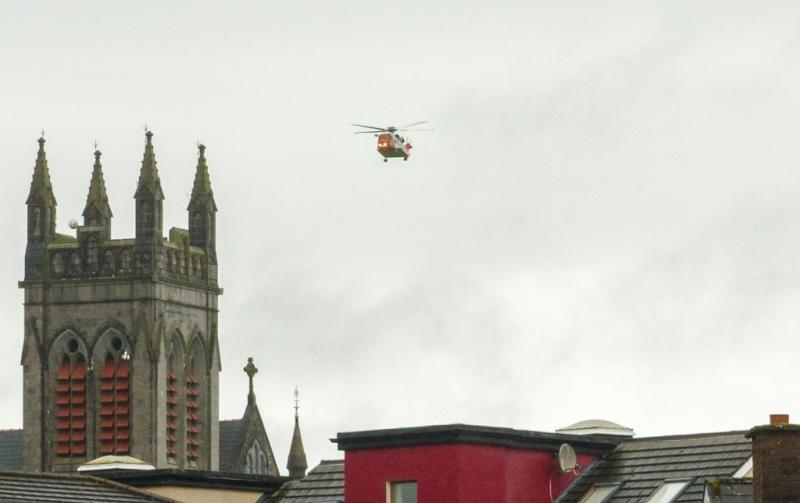 A helicopter hovers over Carrick town centre as part of a major Garda search on Thursday. Pic -Gerry Faughnan

Leitrim gardai are following a definite line of inquiry following a large search for three men in Carrick-on-Shannon last night.

Supt Kevin English told www.leitrimobserver.ie  that enquiries are on-going while a technical examination of the vehicle which they crashed is taking place.

The three men were travelling in a maroon coloured Volvo when they crashed at the entrance to the park at Quay Road at about 4.30 yesterday afternoon.

The three fled the scene.

All three are described as being in their early twenties.

One of the men has brown hair and ws wearing a grey polo shirt with dark coloured trousers, another has a red and black shirt with a white stripe down the middle and has a tight haircut, while the third man is understood to around six foot tall and was wearing a black zip-top and green/grey trousers.

A massive search was undertaken yesterday, which involved assistance from a helicopter support unit.

Gardai are examining CCTV and also footage from the new CCTV system recently installed in the Carrick-on-Shannon as part of their investigation.

In tandem with the crash investigation, gardai are also following up on burglaries, two of which took place in Manorhamilton and two on the Dromahair side of Sligo in the Calry area.

Cash and jewellry were targeted in the incidents in both Calry and Manorhamilton.

For more on this story read here