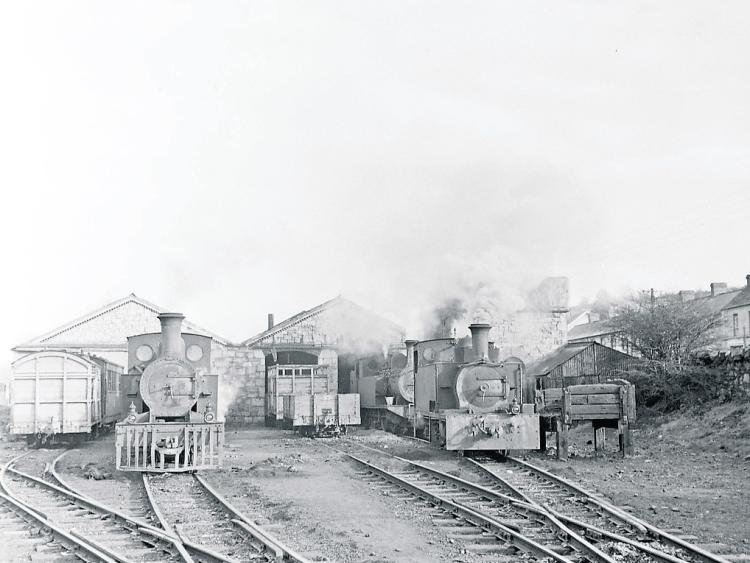 The Cavan and Leitrim Railway, Ballinamore, one of the many bodies owed money by Leitrim County Council in 1923

In 1923, something happened that has never occurred before or since - Leitrim County Council was dissolved by special order.
Facing a seemingly unsurmountable financial deficit, with committee members failing to appear for meetings and rate collections at an all time low, a Commissioner was appointed and the County Council ceased to function as a democratic body for the succeeding three years.

The sealed Order
Reported in the Leitrim Observer on June 16, 1923 was coverage of the official dissolution of the council.
The actual act of dissolving the body at a special meeting on Tuesday, June 12 appeared quite innocuous: “The acting secretary handed in the sealed order dissolving the Leitrim County Council as a result of the present inquiry, and appointing Pádraig O Siochfradha, as Commissioner to discharge the duties of the dissolved County Council.”
With that action - Leitrim County Council as an elected body of representatives, was no more and all council property, powers and duties were temporarily transfer to Mr O Siochfradha.
But what led to this unprecedented step?

Financial crisis
Of major concern was the “alarming position” of the council finances.
At the time the Leitrim Observer reported that Commissioner O'Siochfradha remarked on the “very serious state of affairs” arising “regarding the very unsatisfactory state of the rate collection in County Leitrim.”
The amount scheduled for collection in 1921-22 added to the arrears due totaled £113,070. A phenomenal sum at the time.
This meant there was little income to offset the many debts owed by the local authority.
According to the report Leitrim County Council owed banks £35,000 in loans. In addition to the banks, Leitrim County Council also owed money for the maintenance and provision of services through the county home for a period of some six months, an amount coming to between £5,000 and £6,000.
A similar amount was also owed to the Joint Committee of the Asylum “for the maintenance of the mental afflicted person from Leitrim who were inmates in institutions”.
The Cavan and Leitrim Railway was also included in the list of bodies owed money by Leitrim County Council with a debt outstanding in the region of some £7,000 to £8,000.
It was also noted that “besides that, some of the public services of the county have been let go to the dogs for the past six or eight months.

“There had not been a load of macadam placed on the county roads since last November (some seven months) with the result that they are a bye-word and a disgrace throughout the country, a danger to the traveling public as well as a great hindrance to the trade and commerce of the county.”
All of these financial problems were blamed on what was described as a “very foolish 'no rate' campaign which has been carried out in Leitrim for several years back”.

The report speculated: “Whether this was caused by cussedness or that the people were led astray by false promises, or were lacking altogether in a sense of civic duty or responsibility was a matter of opinion, but the fact remained that an extraordinary of affairs had developed, when people had to be maintained on private credit for six months in the County Home and Hospitals. Public servants had not received salaries since last Christmas, and some of them for longer periods.
“In the Sligo Asylum, the unfortunate mentally afflicted people of the county were eating Sligo bread and wearing Sligo clothes, were sheltered in a Sligo building and the Sligo people supplied them with food and clothing all that time.
“The people of the County Leitrim took the matter very lightly, and did not show any inclination to change this deplorable state of affairs,” adds the report published in 1923.

The appointed commissioner was told that not only had people in the county refused to pay rates, but the finger of blame was also cast at the rate collectors themselves for failing to show “the necessary diligence” in their work.
In fact, it emerged that in certain districts of the county, rate payers had not been asked to pay rates for two years and the council itself was also accused of failing in the “necessary diligence” to compel people to pay outstanding money.
“The fact remained that one way or another the money was not coming in and the sum of £66,000 was in the pockets of the rate payers instead of being in the coffers of the Treasurer to the county council, and if this state of things were allowed to continue, by the end of September, they would be faced with an outstanding amount of rates totally about £87,000.”
Mr O'Siochfradha stressed that “this county being in a desperate position, it must be got out of it somehow or other.”
He said the rates due for 1921-22 “must be got in within the next three weeks” and told rates collectors if they failed to collect the outstanding money “he would have to discharge them and hand the collecting of the rates to another agency, which he could trust to collect it in time.”

Describing himself as a “man of peaceful methods” he expressed the hope that people would “realise their duty as citizens, to pay the rates which were legally due”.
He said that he did not believe the situation had arisen out of a blatant refusal to pay rates but rather as a failing brought about by something going wrong in the “ordinary machinery of government” over the previous two years.
Outlining again the substantial debt burden of the council he said he was “certain the people would agree with him that it was not honest or straight forward to seek to evade responsibility for one's share of civic and poor law burdens”.

The council remained dissolved until 1926.