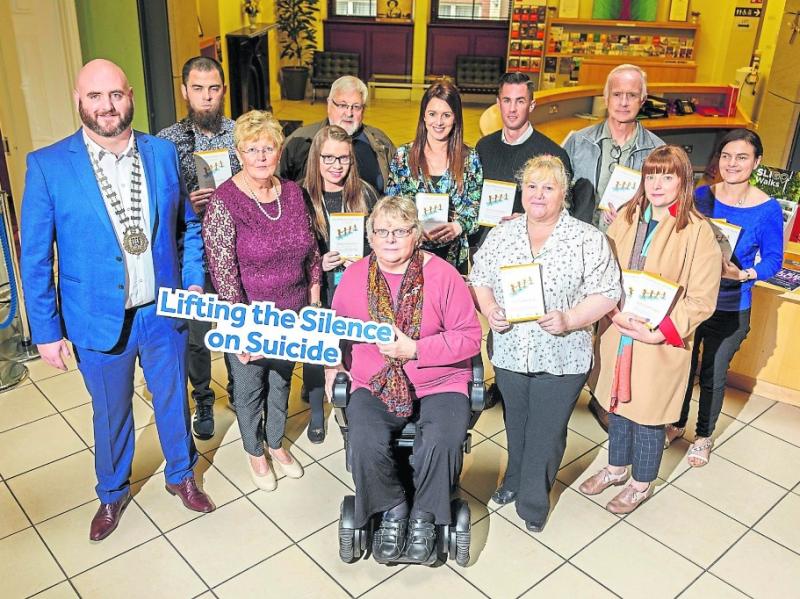 World Mental Health Day is held each year on October 10. It is an annual awareness raising event organised by the World Federation for Mental Health.

This year’s theme is “Focus on suicide prevention”.

To coincide with this the Lifting the Silence on Suicide community events were launched by the Mayor of Sligo, Councillor Gino O'Boyle on October 2 in City Hall, Sligo.

The Connecting for Life Sligo and Leitrim Implementation Group is reminding us all on World Mental Health Week (October 7-13) how the very simple day-to-day interactions we have with others, have the potential to make a difference to someone who may be struggling or feeling vulnerable.

It is commonly reported that thoughts of suicide often correlate with loneliness. Being connected is therefore a very important factor in suicide prevention. Feeling close to, and valued by, other people is a fundamental human need.

"There is no health without mental health." -- @antonioguterres on Thursday's World #MentalHealth Day.

More from @WHO on this year's focus on suicide prevention: https://t.co/AsKCY8Mw1L pic.twitter.com/b9mJM45bLn

Social relationships are critical for promoting wellbeing and can help reduce the risk of mental ill health and suicide for people of all ages. Humans are naturally social.

The Connecting for Life Sligo and Leitrim Implementation Group is encouraging people to raise awareness of the scale of suicide and the role that each of us can play to help prevent it.

A series of public events entitled Lifting the Silence on Suicide have been planned to take place in communities throughout Sligo and Leitrim in the coming months.

We hope that you will spread the word and encourage family, friends and colleagues to attend these events to open the conversation about suicide.

The public talks outlined below will offer guidance on how we can all help prevent suicide, discuss the links between alcohol, substance misuse and suicide, discuss bereavement by suicide and outline the supports, services and training available in our area.

We can all think about how offering support may play a part in helping to prevent suicide. We are all part of communities which link us to friends, family, colleagues and/or neighbours.

The act of showing care and concern to someone who may be vulnerable, can make a big difference in their lives.
Asking someone whether they are OK, listening to what they have to say in a non-judgemental way, and letting them know you care, can all have a significant impact.

“Death through suicide is devastating not only for the families but also the local community. Each suicide affects society as a whole.
“ Therefore, as a society we need to de-stigmatise suicide and talk more openly about its causes and its impacts and how these can be prevented.

“The development of a local Sligo and Leitrim Connecting for Life plan brings together communities in much needed unity to raise awareness and supporting those affected.

“I encourage people to come to one of the upcoming events and learn about what you can do to help and about the supports and services which are available,” said Thomás McBride, Acting Resource Officer for Suicide Prevention, Sligo Leitrim Mental Health Services.

The HSE’s website yourmentalhealth.ie contains information and practical tips on how to mind your mental health. Reach out, listen and respond to others who are going through a difficult time.

Also, further information on the Lifting the Silence on Suicide can be found on www.alive2thrive.ie

Admission from 6.30pm with light refreshments served on the night.