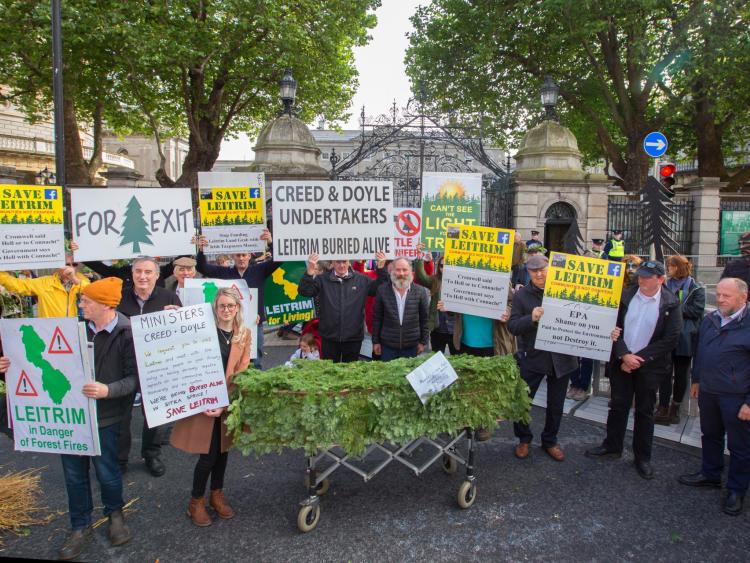 The Save Leitrim demonstrators outside Leinster House yesterday.

The Save Leitrim group opposed to afforestation of Sitka spruce in the county brought their protest to the gates of Dáil Éireann yesterday, Thursday, October 10.

Save Leitrim was founded by a group of like minded people who have raised concerns about the detrimental impact Sitka spruce afforestation is having on the social and economic fabric of rural communities and the environment of County Leitrim.

"As a group, we have a voice but we will only be heard at national or EU level when the people of the townlands, villages and towns of County Leitrim join us and shout STOP. 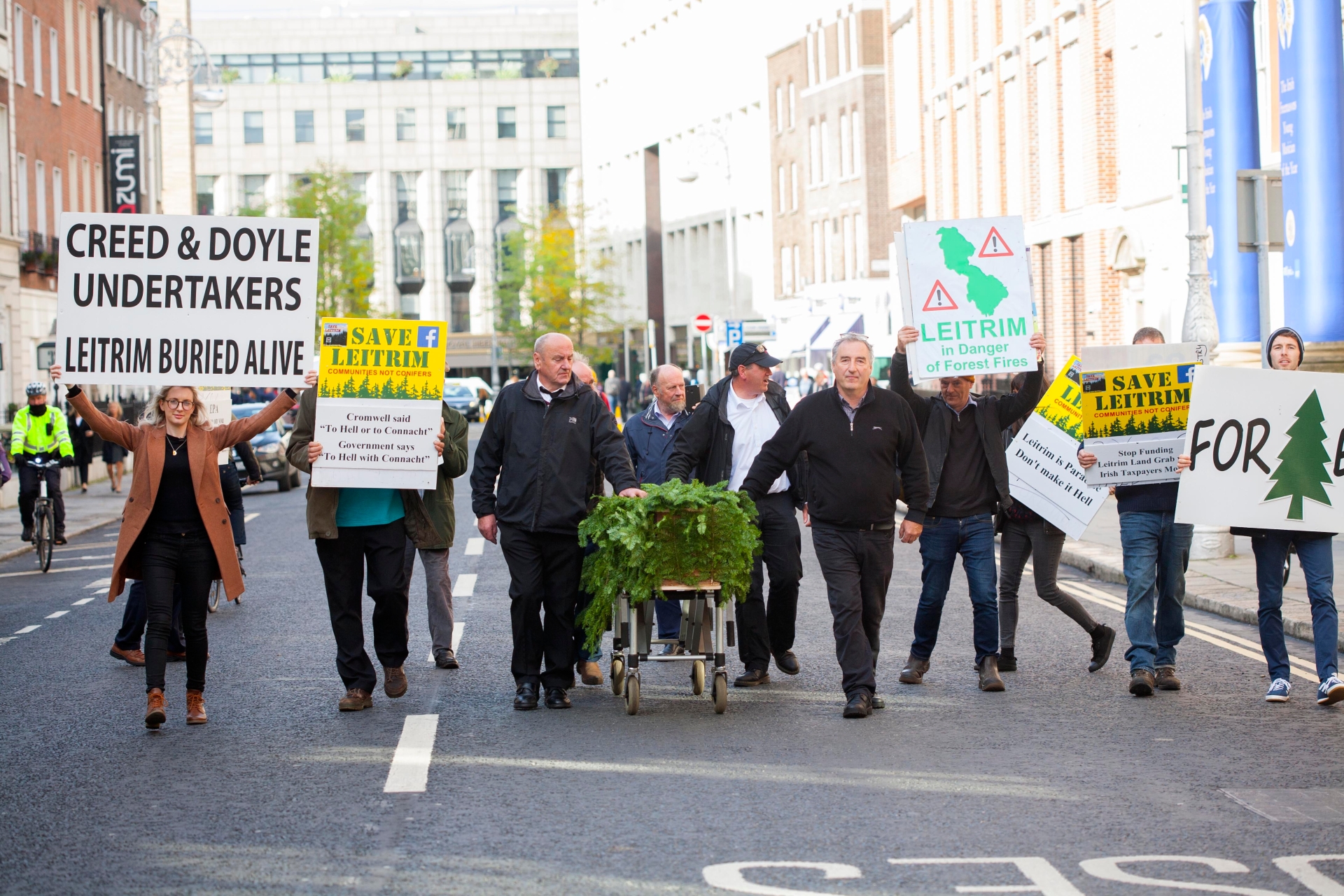 "The local people are seeing first hand the decimation of our communities with a massive increase in afforestation by private forestry companies, vulture funds, tax off setters, pension funds and multinational companies across County Leitrim continuing unabated. All tax free at the expense of the Irish tax payer. This is not EU money. This is Irish tax payer money.

"We are most definitely not against trees! We are for the right trees, in the right places being managed in the right way so that everyone benefits! The environment, the wildlife, the communities, the farmers, the economy, the county and the future. Right now what’s happening, and has been happening for more than 40 years, is wrong. It’s all about the money rather than being about what’s right and best!"

"This monoculture planting is destroying our environment and the eco systems on the land and in our rivers and lakes.

"The people of Leitrim are shouting STOP! They have been doing so for over 40 years. Our county is disappearing fast beneath a 60ft wall of green. We want the government to stop and assess this whole situation.

"We live here! But we won’t be here forever. We will leave this land and all that goes with it, to the next generation. The fight for the survival of Leitrim’s future has just begun and the only agenda we have is to Save Leitrim."

Meanwhile, Sligo-Leitrim TD, Marc MacSharry is seeking engagement with communities in meeting forestry goals and the Minister must engage with and listen to Save Leitrim campaign and other communities.

Addressing the Dáil on the issue Deputy Mac Sharry commented, "I am fully supportive of increasing the forestry cover in the state however we need to see a change in the approach if we are to meet the 18% target for 2050. We are currently at 11%.

"In the North West there is justified anger in the approach taken so far. Local communities are being ignored and a disproportionate concentration of Forestry is being permitted in certain areas.

"Communities do not want to be left in the dark, which is what is happening to some small communities. I do not want this to be misinterpreted as me being against forestry, I am not, but the people of County Leitrim matter and we must be cognisant of their needs and the over concentration which exists in some areas.  People have a right to light which needs to be protected.

"In seeking to reach national targets all counties must play their role.  In addition, we must diversify to promote more broad leaf and native species rather than the current over concentration of invasive species which is threatening biodiversity.

"It is clear that to meet our 2050 target the current method will not work. We need to diversify what we are planting by stripping out the bureaucracy and including local communities' views in terms of those areas that are over-afforested," concluded Deputy Mac Sharry.