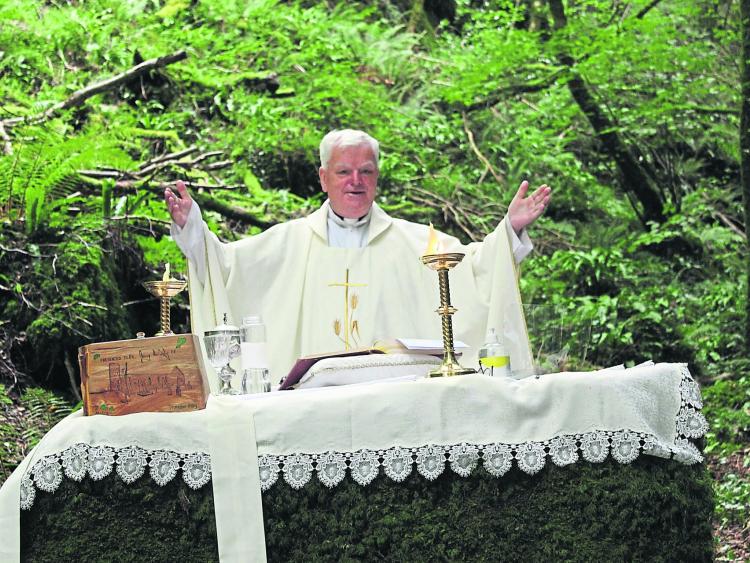 In normal unrestricted times  Fr Gerard (Gerry) Comiskey of Doonkelly would have celebrated his 40th anniversary of ordination in a crowded church.
Local people and friends among the clergy in the Diocese of Kilmore would have been happy among the prayerful throng.
But recently on Sunday afternoon, August 16, Fr Gerry, with siblings, in-laws, nieces and nephews, chose the spiritual aura of a Newtownmanor woodland grove with what was possibly an ancient Mass rock.
Here in a townland called Carrickanurroo, situated in a Coillte walkway near Lough Gill, Fr Gerry solemnly and joyfully celebrated 40 years of priestly ordination.
The symbolical resonance motivated his choice. During penal times in the 18th century there were severe restrictions on the celebration of Mass.
Groups of people furtively assembled at Mass rocks in remote woodland and hillside locations for religious events led by priests who wandered incognito around the countryside.
Today the Covid-19 crisis worldwide is severely restricting secular and religious events.
In his anniversary homily Gerry, as he is affectionately known in the Diocese of Kilmore, reminded the invited congregation that today the Covid-19 restrictions on attendance at religious services, including funerals and weddings, presents a different form of psychological and social challenge to Christians and others in Ireland and the wider world.
“It is important to keep God in our hearts in these tough times,” he emphasised.
Prayers were offered in memory of all who have been tragically affected by the Covid-19 virus everywhere.
Fr Paul Casey concelebrated and congratulated Gerard on behalf of Dromahair parish and on behalf of clergy in the Diocese of Kilmore.
From a well known farming family, Gerard has three brothers and three sisters. His brother Michael Comiskey served in the Senate some years ago.
Another brother, Kevin Comiskey, is active in the Leitrim Hillfarmers Association in the Leitrim IFA.
Afterwards the family enjoyed an outdoor party. During the evening several members of the Newtownmanor community drove past the house, their vehicles festooned with balloons, waving and tooting horns in honour of the happy occasion.
Information from Garreth Byrne of Dromahair.