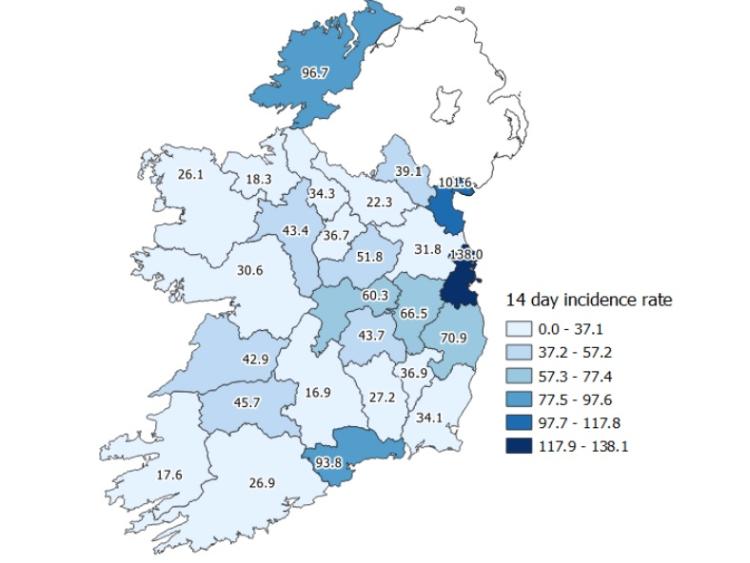 Leitrim has been highlighted this week as a county showing “concerning trends” of Covid-19 cases according to health officials.
The statistics, figures and threat of a Level 3 lockdown has caused much confusion locally with less than five
Covid-19 cases reported in the past week.

Although more positive Covid cases are expected to be announced this week according to local sources, the rate of incidence has more than halved in a number of days.
According to figures released by the HPSC (on Tuesday, September 22) Leitrim had 11 positive cases of Covid-19 reported over the past two weeks.
That figure viewed as per 100,000 population sees Leitrim with a rate of 34.3.

Leitrim had the fourth highest rate of cases in the country at 78.0 last Friday, September 18 which referred to 25 cases reported over two weeks.

Assistant secretary at the Department of the Taoiseach Liz Canavan stated on Monday, “While there has been a significant focus on Dublin; Louth, Waterford, Limerick, Kildare, Leitrim, Donegal and Offaly are now showing concerning trends.”

HSE’s Chief Clinical Officer Colm Henry also said they are looking at Leitrim's two day incidence rate and have seen an “escalation at the level of community transmissions” which are not linked to the train of known transmissions.

The National Public Health Emergency Team (NPHET) meets this Thursday to discuss the possibility of further restrictions on counties outside of Dublin.
Leitrim has been named alongside Donegal, Limerick, Louth, Kildare, Offaly, Waterford and Wicklow as counties of concern. Senior Government official Liz Canavan warned on Monday that people have to double their efforts to halt the spread of the virus.
People across Ireland and in particular these counties are urged to seize the window of opportunity they have now to avoid anti-Covid restrictions being imposed.

Community transmission accounts for cases out in public areas, or the streets that cannot be traced back to one location or any known chain of transmission.