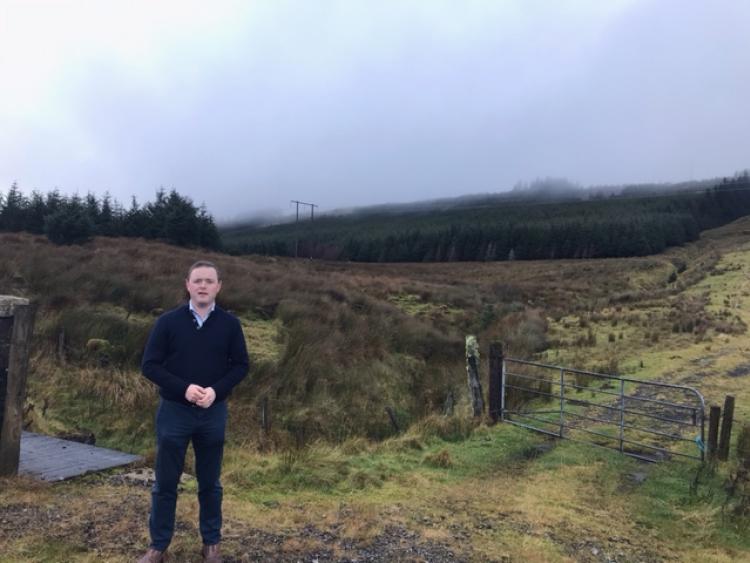 Cllr John Paul Feeley at the Glangevlin access to Cuilcagh

Contractors have commenced work on a new carpark in Glan Gap for those wishing to access Cuilcagh from the Glangevlin side, Co Cavan.

The LEADER funding project will include minor upgrade works at the Altachullion Viewing Point, Tullydermot Waterfall and put in place a lowland walk from the beautiful Tullydermot waterfall to Alteen close to the Swanlinbar / Mullen road.
Cllr Feeley said “Access to Cuilcagh has been a growing issue. More and more people want to climb to the highest point in Cavan and Fermanagh. Experiencing the natural beauty of our countryside should not be the preserve of the view but be as open as possible to all.

“Of course, the protection of the environment is also of paramount importance. This investment addresses part of the issue in that it will take cars off the road across Glan Gap providing a safe parking place for people to leave their car as they head to the mountain summit.
Furthermore, the investment at Altachullion and Tullydermott will make both sites more attractive. The creation of a further marked walkway in the lower slopes of Cuilcagh will provide people with an option to experience the Cuilcagh Mountains without having to climb to the summit. It will be a welcome addition to the other marked walking routes in the Swanlinbar area some of which have also been upgraded in recent months by the Council.”

Cllr Feeley thanked all the local landowners for their cooperation in this project and the staff of the Cavan County Council who have done so much preparatory work, engaging with interested parties, statutory agencies and the principal funder, LEADER.
“This investment is a welcome first step as far as I am concerned. It will improve things greatly in Glan Gap. It will take some of the pressure of the Legnabrocky Trail better known as the Stairway to Heaven on the Fermanagh side.
“Cuilcagh is a key part of the Geopark, shared between the two counties and having on its slopes the key site of the Marble Arch Caves, Cavan Burren Park, the Shannon Pot and the Stairway to Heaven.
“The improvement of facilities for those accessing Cuilcagh has been a constant issue for me over these past few years.” he said.

He added designated marked routes need to be put in place for walkers that work with the environment that is Cuilcagh, a Special Area of Conservation (SAC).