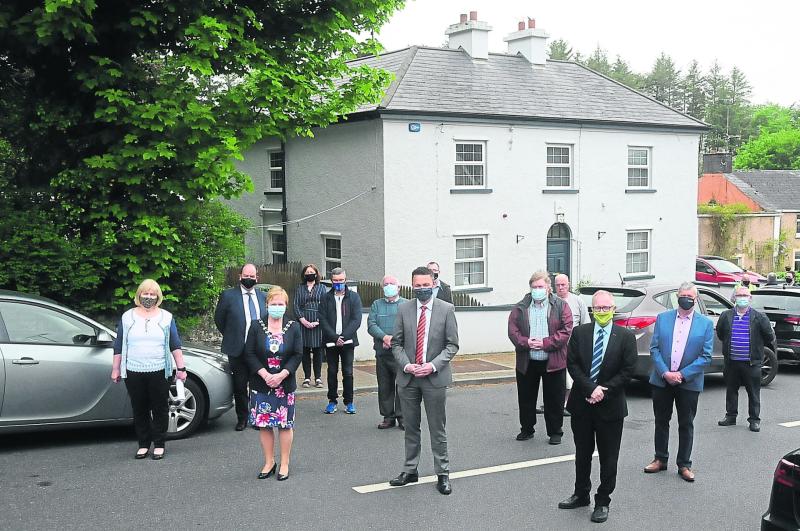 Minister of State for the OPW, Patrick O'Donovan issued stark words to local authorities including Leitrim County Council during his visit to Dromahair last week.

The minister of state inspected Dromahair's old Garda barrack and listened to the Dromahair Development Association who wish to take it over and turn it into a community centre.
He said Dromahair garda station is “in the heart of the town and has a great future.”

Dromahair, Drumkeerin and Keshcarrigan garda stations remain on the list for public auction this September and will not be removed until a business plan “including Leitrim County Council” is submitted, the Minister of State, Patrick O'Donovan told this paper when queried on the matter in Dromahair last week.
The Limerick deputy did not hold back when he spoke to the Dromahair community.
He was encouraged by the community's bid and said he saw a great opportunity in the former RIC barracks in the centre of the village.

But he also instructed that Leitrim County Council “must be on board” for the plan to continue.
The minister's sentiments are to be applied to all those seeking a handover of closed garda stations to the community.
He stated, “We were left with these - the rights and wrongs of that is water under the bridge. Our focus is to give them a use, primarily for the state; the likes of the HSE or the council.

“Every state agency have been written to, Leitrim County Council will have been asked if they want it. I have been very forceful in the department that I want this dealt with. It is amazing that we are in the middle of a housing crisis and I have all of these buildings, and I have local authorities that won't even respond to me.
“And yet I have a Prime Time Investigates critical of the OPW saying that the OPW are sort of hoarding these buildings. So let me be very clear, I don’t want them, I want the place to have a use.
“I will say one thing, we don't want to burden a community with them, some of these buildings are old. We don’t want to land a community group with a liability and a millstone around their neck.”

Minister O’Donovan commented, “now this has gone on in many cases 13-14 years - shocking stuff.”
He said the OPW and his department will work “with those interested.” He noted “The last port of call and the most regrettable thing is a for sale sign.”

He also explained that some old RIC barracks don't have a proper title and there is a lot of work involved to establish one.
The Observer asked the council if they will partner with local groups to keep the buildings in the community.

Leitrim County Council stated it “is committed to the regeneration and revitalisation of all towns and villages throughout County Leitrim. In delivering on this commitment, the Council will work in collaboration with any stakeholders or community groups who wish to achieve similar outcomes for their local town or village.”