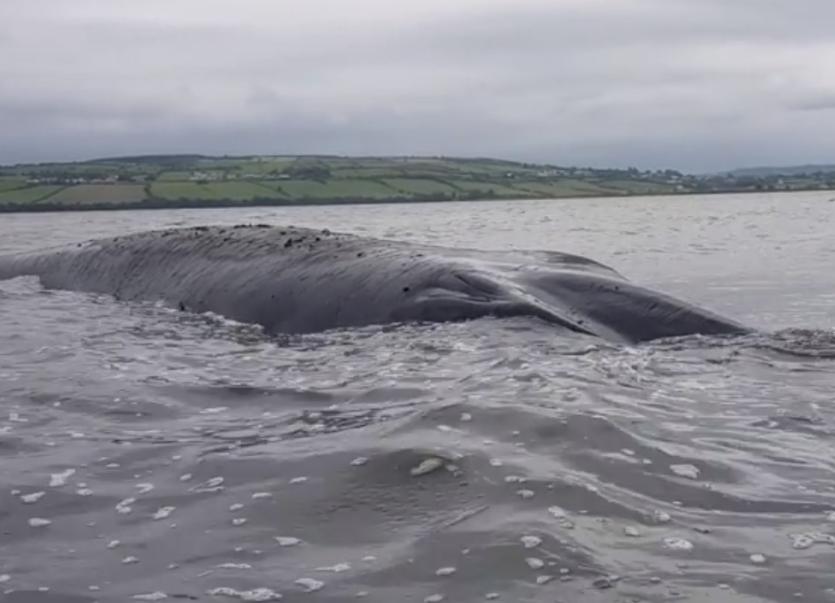 A 60 foot fin whale weighing between 55 and 60 tonnes has sadly died after becoming stranded in the silt of Lough Swilly north of Letterkenny.

Volunteers from the Donegal branch of the Irish Whale and Dolphin Group stayed with animal all day Saturday and overnight as they waited for the inevitable to happen. Unfortunately, there was no way to save the creature or to relieve its suffering.

A spokesperson said: "There are no obvious marks on its body apart from rolling on mudflats and blistering of the skin caused by the sun.

"It's possible the animal may have been feeding in shallower waters on small fish species and has got disorientated and ended up on mudflats. Very sad sight to see."

On Monday, the group updated followers with the sad news that the magnificent whale had died.

In post on the Donegal IWDG Facebook page a spokesperson said: "A sorrowful ending, there’s a few scenarios that could have brought the Fin Whale up the Swilly. But whatever the reason ultimately there was only one possible ending.

"The magnificence of this creature has to be appreciated. There is very little knowledge of its habits; it is a deep diving mammal so should not be anywhere near land.

"It is generally known to be a lone creature, but has been known to be gathered in twos and up to five."

Readers are advised that the following account of the whale's final moments as recounted by Donegal IWDG may be distressing.

"After receiving the report of a live stranding the Donegal IWDG, dedicated marine biologists and NPWS arrived to the site.

"After the agonising realisation that there was no way to give the mammal a chance of survival and no way to ease the distress of the creature as the glar restricted our access to it all we could do was stay at a distance in hope that comfort was given with our compassion.

"In the last moments of dusk, the heaviness of the animal had sunk its huge body deeper and deeper into the silt of the Swilly.

"The eerie laboured death rattle could be heard in between the animals blows.

"Thankfully after a couple of hours out of the water - that would have only mustered excruciating pain for the animal as its usually graceful demure in thousands of meters of sea felt the weight of its own body crushing it’s internal organs - the tide started to come in and the animal got a little bit of movement.

"It then gave five minutes of huge full body movements and with a final three huge booms from the flap of its tail off the glar, (likely to be bodily reflex fight for air) probably aided the silted water to securely block the blow hole.

"The prayers to the ending of its suffering were answered and at 23.18 the eve of the Solstice June 21, 2021 the fin whale had passed.

"A mention of appreciation to the owners of the Castle Grove Country House, who shared access and their support to us and the mammal in the place of its final beats.

"They had kept their own vigil to the mammal and their kindness eased the sadness of the occasion."