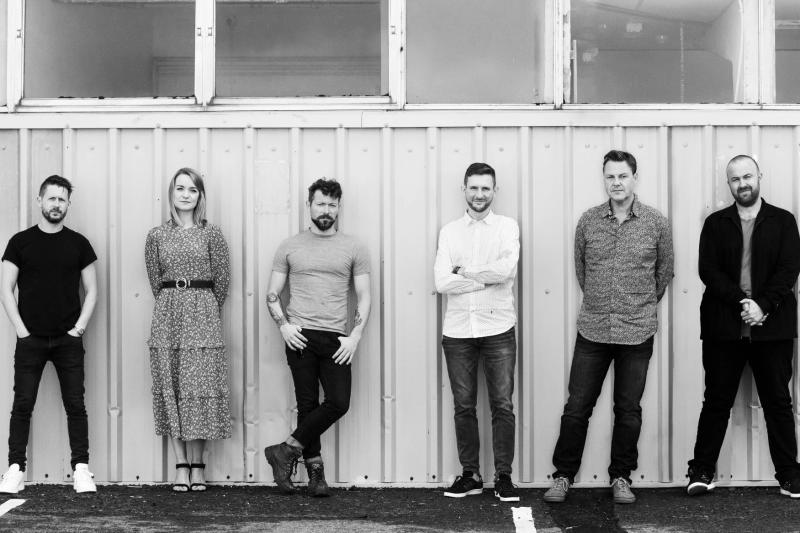 ONSET is an exciting new group featuring some of Ireland’s finest traditional musicians who have just announced the release of their debut single as well as a nationwide tour for 2021.

ONSET was formed by Pádraig Rynne (concertina + electronics), Graham Henderson (keyboard) and Davie Ryan (drums) who are joined by Tara Breen (fiddle), Niall McCabe (vocals/acoustic guitar) and Adam Taylor (bass). The group was borne out of their collective passion for a dynamic approach to traditional music. The music draws from their diverse musical backgrounds, and creates a deep and fascinating musical experience with flowing melodies and rhythmic character.

Successful recipients of the MISP scheme, ONSET began remotely writing and recording a four track EP over lockdown in 2021 developing a unique and fresh sound. They are planning to release their debut single ‘Invictus’ which will tie-in with their upcoming tour this autumn.

Through funding from the Arts Council of Ireland ONSET, will embark on a series of live shows through October, November, and December 2021 where they are sure to wow audiences with their extraordinary musicianship through a mix of brand new music, tunes from Padraig Rynne’s 2019 album Conscious, and original songs from Niall McCabe.

Described as "one of the freshest sounds in Irish music", Pádraig Rynne is a virtuoso musician, prolific composer and is regarded as the finest concertina player in Irish music today. Pádraig released two albums with his ground-breaking band Notify who collaborated with multi-Grammy award winning musicians Mark Lettieri and Jason Thomas of Snarky Puppy.

Graham Henderson is a multi-instrumentalist, producer, and composer. He began playing with Fairground Attraction who toured internationally and were nominated for two Brit Awards. Graham later joined Coolfin and has worked with artists such as Iarla O’Lionaird, Paul Brady, Declan O’Rourke, Moving Hearts, and Sinead O’Connor. Graham also produced the 2019 Dervish album The Great Irish Songbook.

Niall McCabe began playing traditional Irish and folk music before branching out into rock and soul. Following the success with his folk/soul project The Niall McCabe Band he teamed up with Irish New Wave Trad group Beoga. His first solo release Borders saw traditional roots accordions and mandolins intertwine with synths and drums, something he has brought to ONSET.

Tara Breen is a highly talented multi-instrumentalist and has performed with Ciorras, Galician piper Carlos Núñez and the Chieftains. In 2011 Tara was one of the musicians chosen to perform the Queen of England's visit to Ireland.

Dubliner Adam Taylor trained in the Dublin Institute of Technology Conservatory of Music and Drama under Waldemar Kozak of the National Symphony Orchestra. Adam is one of the founding members of the groove jazz collective, Creamy Goodness – a group made up of top session and jazz players from Dublin.