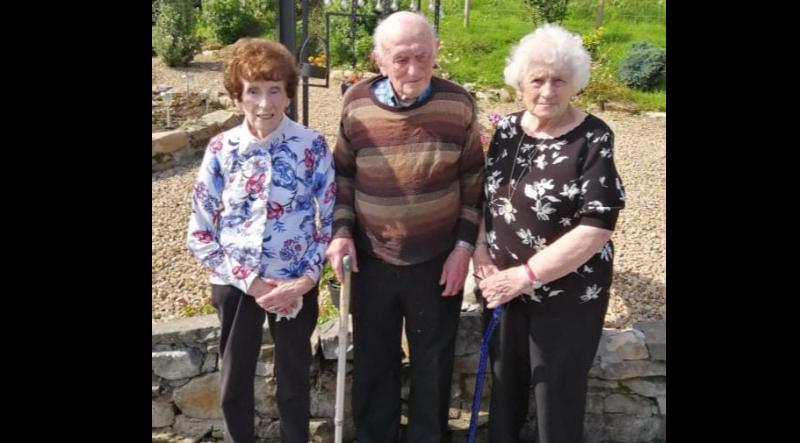 Siblings reunited after a year apart due to Covid. Mary Anne (91), Sonny (90) and Katie (92) pictured together earlier this year in Corlough, Co Cavan visiting their mother's homestead

Covid restrictions disrupted a lot of “coming home” plans for Leitrim people over the past 18 months but none more so than for the Murphy family from Corraleehan.

Mary Anne and Katie Murphy both left Corraleehan in the mid 1940s as young women. They didn't have much choice, work and money was scarce.
The girls were heartbroken to leave their father Patrick and younger brother Sonny behind but were lucky to be able to travel and stay with their aunt Kate Heavey in Providence, USA. As they waved goodbye to Corraleehan, Leitrim and the Emerald Isle they didn't know if they would see it again.

But this year marked the 70th plus visit of Katie back to Corraleehan.
While both ladies married, had children and made happy lives in America, they never forgot their home in Drumderg, Corraleehan.
So much so, that they saved up all year round to return home almost every year, with Katie coming durng Summer and Winter for many years.

The Murphy siblings lost their mother Alice when she was just 38-years-old. Sonny told the paper that their father Patrick worked hard to keep the three young children at home with him. He remembers helping his father to sell pounds of potatoes which had been sowed for their own consumption but instead had to be sold to buy winter shoes for the children.

The siblings developed a bond that could not be broken by the Atlantic Ocean and the thousands of miles between them.
Sonny aged 90, Mary Anne aged 91 and Katie aged 92 are all in good health. They call each other on the phone every week and have even started to use video calls.

While they were disappointed not to see each other in 2020 due to Covid restrictions; it made the reunion in 2021 even better.
And the three nonagenarians have plans to meet up in Summer 2022!
The three siblings also read the Leitrim Observer every week and like to keep up-to-date with local news and developments in the Corraleehan area.