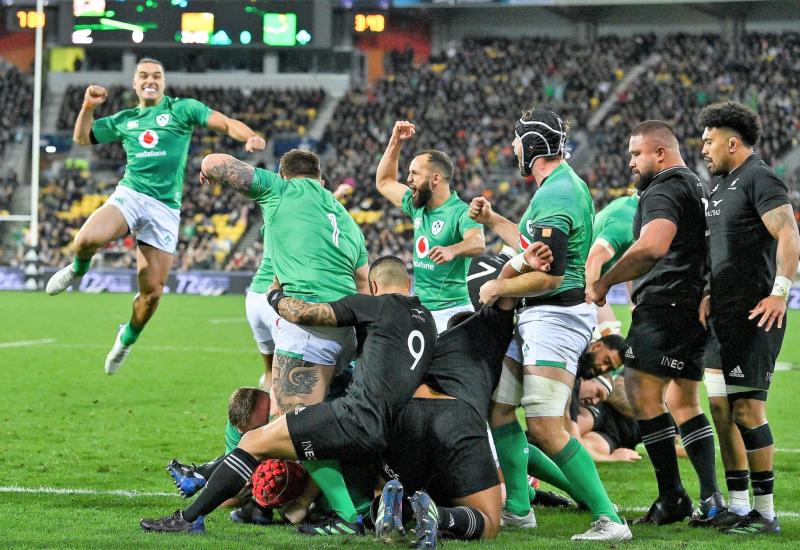 Contrary git that I am, the overwhelming outpouring of emotion that greeted Ireland's historic test series victory over New Zealand last Saturday has left me just a little bit cold - not easy to do as the country melts under a heatwave right now!

I mightn't be an alickadoo, the curious nickname given to the lifeblood of rugby clubs the length and breadth of the country, but I recognise the scale of what Andy Farrell's team achieved in Wellington and it truly was an historic day - a phrase that's used so much that it has lost its meaning  but  Saturday lives up to the billing!

The hyperbole on social media you expect - the greatest Irish sporting achievement since Italia 90 opined by so many that I wondered if some of those infamous Russian bot factories had cut loose on the Irish sporting public. Emotion and social media don't exactly make good bedfellows so I'd forgive those who mightn't know any better, particularly as 'celebrations' might have played a part in the tweets!

But where I draw a line  is when the media get swept up in the emotion too and the headline on the back page of the Sports section in The Sunday Independent is enough to set anyone who follows another sport off as Eamonn Sweeney wrote “Ireland’s series win over the All Blacks is the greatest achievement in our sporting history”.

Tony Ward,  reading the room a bit better, called it the “greatest team success in Irish sports history” and he has a case there but how does it compare to Italia 90 or Paul O'Donovan and Fintan McCarthy's gold in Tokyo? Or are they considered to be  a team?

We  call it “recency bias” where things that happen in the here and now are immediately ranked higher than those of the past but I'm pretty sure I could come up with some compelling alternatives in short order!

Memories of the frankly absurd decision to snub Derval O'Rourke for RTE's Sports Personality of the Year in 2006 came flooding back with Henry Shefflin getting the nod. I'd be a big fan of King Henry but in 2006, O'Rourke won World Indoor gold and European silver and one of the judges remarking they didn't even know who the Cork woman was until a few months previous!

Everyone, and I mean everyone, felt O'Rourke was the clear outstanding choice in a year where Paul O'Connell won a Triple Crown and European Cup and the other nominees included Bernard Dunne, Katie Taylor, Padraig Harrington, Darren Clarke, Kieran Donaghy, Aidan O'Brien and Jessica Kürten, but somehow O'Rourke lost out to a player, albeit one of the all time greats, in a  purely Irish sport.

Context does matter and a first series win over the feared All Blacks can't be dismissed but in our rush to acclaim our most recent heroes, we can't forget someone like Pat O'Callaghan who, while working as a full-time doctor, won the   Olympic gold medal in the hammer in 1928 and 1932 - just think what those achievements meant to the fledgling Irish nation who had just won her freedom!

I'll not belittle what Ireland achieved last Saturday as some did, more for the sake of rising an argument than anything else, congratulating the rugby lads on their win in a friendly! That's shit stirring of epic proportions but it is also just the other side of the coin when  proclaiming the winners of the All-Ireland Football and Hurling titles to be this country's greatest sportspeople while they play a sport confined solely to this country - much like the Super Bowl winners are crowned World Champions to the amusement of the rest of the world!

Tests are the milieu of the rugby community so it definitely counts but how does Saturday's victory stacks up to the weight of  history considering the fact that  when the game kicked off in Wellington,  Ireland were ranked number 2 in the world and the All Blacks number 5. So, as historic as it undoubtedly is, maybe it isn't the other worldly event it has been billed as after all?

Comparing achievements in different sports sounds  suspiciously like the old 'compare and contrast' questions in Leaving Cert English papers but how on earth do you compare what Ireland did in Wellington with what 19-year-old Rhasidat Adeleke did in Oregon at the World Athletics championships last weekend?

There are probably 10 to 12 countries playing rugby at the highest level while the young Tallaght sprinter is competing on a stage with the best from over 200 countries! Athletics and soccer are probably the most global of all sports but achievements in those arenas don't automatically outrank those in other disciplines?

What really disappoints is the short memory of those making such hyperbolic statements - it's not even 12 months gone since O'Donovan & McCarthy and Kellie Harrington claimed gold medals at the Tokyo Olympics and  suddenly, those  achievements, largely underfunded and out of the spotlight, are relegated to the mists of time by a victory, however wonderful, attained by one of the best funded sports teams ever to leave these shores - does that come into it?

Teams are lionised far more than the individual but which is harder - one person against the best the world has to offer or pulling together a team to conquer the world. Figure that one out!

As a small country, we're not short of sporting legends but consider the impact Sonia and Katie had on Irish sport - I don't even have to use their full names but we all know who they are!  What about Michael Carruth or Ronnie Delaney?  Stephen Roche and Sean Kelly? John Treacy and Eamonn Coughlan? Denis Taylor and Ken Doherty? I've got nowhere near the legions of racing heroes this country has produced so where do you start there?

What would have happened had Rory McIlroy won the British Open on Sunday, joining some elite company had he picked up his fifth Major? Golf isn't my sport by any means but would that not have been worthy of a greatest ever sporting moment tag? And we haven't even mentioned Padraig Harrington or Shane Lowry or Graeme McDowell!

What about our soccer heroes, plying their trade in the world's most popular  sport? Roy Keane and Denis Irwin won all around them with Man Utd while travel back the mists of time to Patrick O'Connell, the Dubliner who won a British Home Championship in 1914 with Ireland and La Liga with Real Betis and saved FC Barcelona into the bargain!

What about Liam Brady who won the Scudetto with Juventus or Paul McGrath who won a nation's heart with some truly epic performances - that display in Giants Stadium against Italy is truly one of Irish sports' greatest days and I haven't even gotten around to Johnny Giles.

That's the problem with those outlandish  statements that have been going around - beating the All Blacks is truly epic but for the older generation, Ciaran Fitzgerald's “where's your f***ing pride” moment and the Triple Crown in 1985 was something that resonated deeply with anyone with an ounce of Irish blood in their veins.

How do we even rank our own local heroes? Frances Cryan, Eddie Leddy, Packie McGarty, Cathal Flynn, Declan Darcy, Mickey Martin and the Nipper Shanley are in the pantheon of Leitrim greats but today's and more recent generations are achieving feats none of us would have thought possible in the past - it doesn't make one better than the other but they are all worthy of recognition.

Let's not get into comparing women's sport and men's - Ladies sport has come a long way rapidly but it probably still lacks the depth of men's sport but that doesn't lessen the achievements either.

I'm sure there are dozens and dozens of examples of Irish heroes I've omitted but that's the  point - context and history is important and simply anointing one magic moment as the best ever moment in Irish sporting history does a disservice to all those who have gone before.

And then I wonder what might happen if Ireland wins the Rugby World Cup? Where would that put last Saturday's victory then?