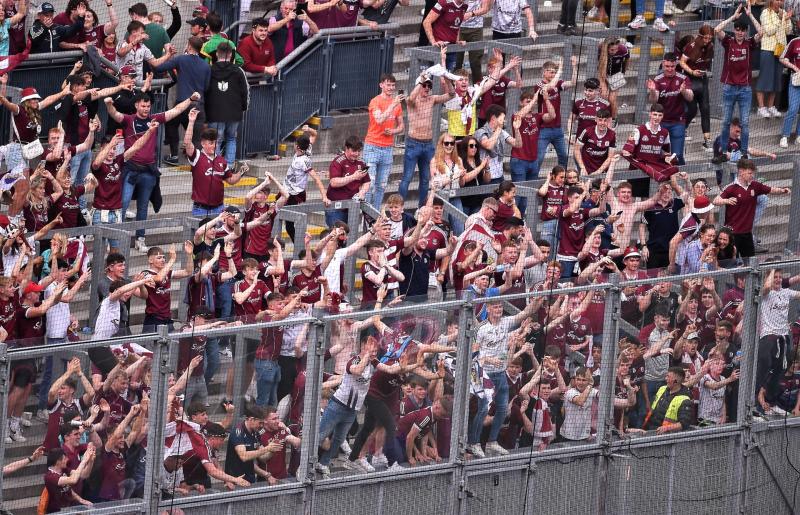 Galway fans celebrate at the end of their All-Ireland Semi-Final victory over Derry Picture: Sportsfile

Disappointment aside that the Dubs are out of the race for Sam, I've got to say that two wildly exciting and madly infuriating All-Ireland Semi-Finals and a wonderful Tailteann Cup Final  in Croke Park last weekend was a real treat for any true football fan.

With the crowds over the two days hitting the 140,000 mark and eight teams, lest we forget the Kilkenny and New York footballers in the All-Ireland Junior Final, this was sport at its finest. It was raw, primeval, gladiatorial, cynical at times, breathtaking and exasperating in equal measure but even at some of its most humdrum moments, it was never less than completely absorbing.

Now, I'll admit that I didn't take in the Junior Final but the social media footage of Kilkenny's lap of honour showed it meant no less to the big ball community in Cats country than next Sunday's All-Ireland Hurling Final.

And let nobody tell you that the Tailteann Cup means nothing - if last Saturday's inaugural Final was supposed to set the tone for the future, well then, mission accomplished because the sizeable contingent that travelled from Cavan and Westmeath treated this game with as much zeal as they would a Leinster or Ulster Final.

Was the standard as high or the execution of skills as high as we saw in the two Senior Semi-Finals? Of course it wasn't but the game was no less entertaining because of the mistakes and errors both teams made in abundance - in fact, those slip-ups, misplaced passes and poor wides probably made the occasion all the better for the Tailteann Cup Final was played with a wildness and abandon that stirs the soul and  appeals to the deeper instincts of us all.

I went to the game wearing royal blue, half hoping to see my Mam's native county prevail but Westmeath were the better side. Cavan had the game in the palm of their hand right up to Thomas Galligan's rush of blood to the head but Cavan looked curiously leaden footed and devoid of the energy and zeal that Westmeath brought in abundance.

The Tailteann Cup was the appetiser to the main course but the Galway Derry game turned into an unpalatable dog's dinner of a contest. Derry were streets ahead in the first half and should have had at least a five point lead at the break as Galway looked like a deer caught in the headlights in that first half - they were slow, their vaunted forwards were making a name for themselves as defenders and doubt was creeping into their psyche as every minute passed by.

But no more than the row at the end of the Armagh game, it seems as if this Galway side need a good rollicking to get them going - the controversy over hawkeye and Shane Walsh's disallowed point infused the Tribesmen with a righteous anger and they completely blew away the Oak Leaf side in the second half.

Now, it was Rory Gallagher's side who were caught in the headlights as Galway did a Derry on Derry - they pushed up, they got away with a few thumping hits and turned Derry over. Critically, Galway were able to turn those hits and turnovers into scores and once Damien Comer found the net, it was all over bar the shouting.

The shouting - what stood out from the first semi-final was just how quiet it was. The massed defence, passing back and forth for minutes on end didn't help as fans seemed to be enduring rather than enjoying the contest. That only changed  when Comer found the net for the second time  and boy did the  Galway fans find their voice!

It was very different on Sunday because at times you couldn't hear yourself think! The noise was simply deafening for the Kerry and Dublin encounter, the tension palpable as over 70,000 people seemed unable to sit back down after the team's parade so they  stayed standing waiting for the national anthem.

There were times when the over and back keep ball tactics of both teams reduced the crowd to anxious silence but when it kicked off, Croke Park became a seething cauldron of noise, rancour, celebration and pent-up fury - truth be told it was glorious.

The Dublin fan in me wonders what might have been had King Con being fit and questions if  Dessie Farrell made two major mistakes in not starting Paddy Small and David Byrne? The Dubs  played second fiddle for most of the game but deep into injury time, Niall Scully ballooned a glorious chance to take the lead at least 20, if not 30 yards wide, and left the door open for Sean O'Shea's now legendary match winning free.

I could gripe about O'Shea not getting a booking for the tackle on Evan Comerford after the penalty - of course, he had to go for it but as we were told last year after John Small levelled Eoghan McLoughlin,  if players are supposed to have a duty of care towards their opponents, then it was a yellow.

But Kerry were the better team and there was no disgrace in how the Dubs went out  - David Clifford and O'Shea had the freedom of Croke Park in the first half and the way they were closed down in the second half when Byrne came on will be the main source of regrets for the Dubs.

Kerry had what Dublin had in 2011 - an insatiable hunger to get the job done. They weren't as impressive as I thought they'd be but their desire shone through and often times, that is exactly what wins these sort of epics.

The Kingdom will start the final as favourites but here's a fact - the last three teams that knocked the Dubs out in the semi-final all lost the subsequent final. Did Kerry peak last Sunday and can they recover from their exertions  in less than two weeks time? And Galway might have  better forwards than Dublin did last Sunday!

Padraic Joyce's team are improving each and every game, they'll be outsiders certainly but maybe fate is on their side too!