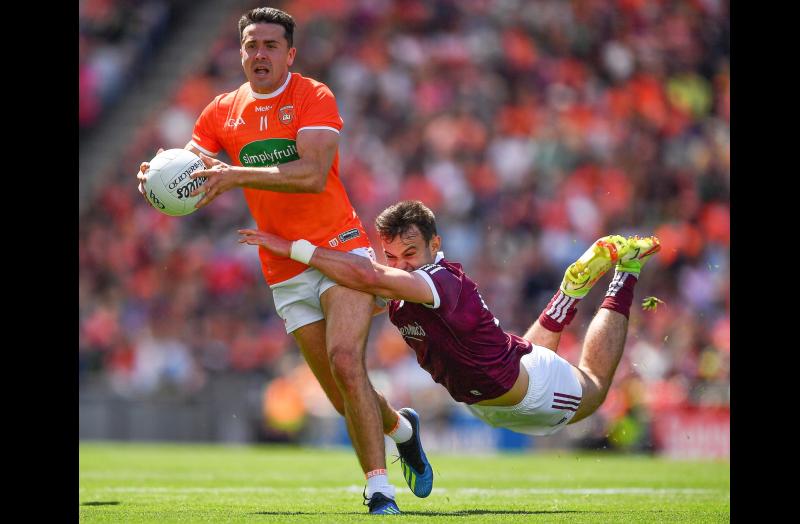 Hard to get your head around the phenomenon that is GAA logic because, judging from the reaction to the dramatic ending of last Sunday's Galway and Armagh epic, it appears that what was ideal for the footballers of Leitrim & Sligo, Clare & Limerick just a few short weeks ago suddenly isn't appropriate or fair for teams in the race for the Sam Maguire!

After weeks of bellyaching about the burden imposed on fans heading to Croke Park for the All-Ireland series, the knee jerk reaction of many would have been quite happy to see players heading back to Croke Park next weekend and fans being forced to put their hands into the pockets again - that's the world of GAA logic!

A few little wrinkles though!

The world and their mother knew that extra-time and  penalties were on the cards this year with no replays at all, except in finals, so changing the rules of a competition mid-stream because you enjoyed a game in Croke Park is off the wall - why should Armagh & Galway benefit when Leitrim and Sligo didn't?

Penalties are the fairest way to break the deadlock after all other avenues have been exhausted. Freetaking competitions were tried in the past but the GAA quickly found that exhausted players couldn't hit the target from 45 metres and were risking injury as tired muscles seized up after the intense demands of a game. Some say penalties are a lottery but there is enormous skill and bravery in sending the ball to the net and just as much skill in saving them.

Secondly, when and where would the replay take place with two All-Ireland Hurling semi finals down for decision in Croke Park next weekend? Armagh fans accounted for almost half of last Sunday's attendance alone so how do you accommodate everyone?

I know there are some who are vehemently against penalty shootouts but as the GAA is fond of proclaiming, these lads are amateurs and we should welcome anything that reduces the burden on them. That leads in nicely to another curious GAA phenomenon and that is buyer's remorse as the reality of the split season is finally taking hold on the GAA public.

A relentless campaign was waged for years about the plight of the club player - the  footprint of the county scene was just too big and  had to be scaled back. Well, the GAA listened, acted and now, having got exactly what they campaigned for, nobody is happy!

All of  a sudden, it's a disgrace that the GAA are giving up the months of August and September to other sports while the national media are wondering what they're going to do for the next couple of months - schlep around the club game? Heaven forbid!

We haven't gone through a full split season but I'm not sure club players will see the benefits. It is too early to be definite but the club championship in this county won't start until the second week of August so when exactly do club players get the chance to play in better conditions? Like I said, I think buyer's remorse is going to hit those who wanted the full split between club and county.

Looking back over the quarter finals, Saturday's contests were non-events - the Dublin Cork game was a damp squib, the Dubs knew they were going to win and Cork knew it too. The same goes for Derry's demolition of Clare but I wonder if the Oak Leafers are getting a little too much credit for overcoming a limited Clare?

Sunday saw the James Horan era come to an end - Mayo  never looked like taking off on one of their great epic adventures this year and I wonder if the last two years were the last kick of a great team and not the emergence of a new generation? Kerry did what they had to do but they'll still want David Clifford firing on all cylinders for the All-Ireland Semi-Final.

The Galway and Armagh epic could fill up two or three columns - from Galway's superb display and late collapse, the disgraceful scenes at the end of normal time through to the drama of extra-time and the penalty shootout. What amazes me is how little talk there has been about Armagh finishing the game with just 14 players.

The red card for Greg McCabe was the right call but how he wasn't joined by one or two more of his teammates on the sideline defies belief. Referees are human and David Coldrick seemed reluctant to dish out further red cards but had he bitten the bullet, would Armagh have been able to force extra-time? I don't think so.

Another great of Leitrim GAA has passed on to his eternal reward with the passing of Pat Conefrey last Saturday, a man many of us will know from his decades of unselfish devotion to Drumreilly GAA club and Primary Schools football in Leitrim. Pat also had the distinction of lining out with the Green & Gold in the mythical 1958 Connacht Final, eternally known as the “one that got away”.

Most of my dealings with Pat came through the club notes and Pat was a reliable contributor of match reports to the Observer for many, many years and if his reports had an understandable bent towards Drumreilly, there was no doubting their accuracy nor the knowledge behind the insights set down on paper. To his wife Rose and his children Jacinta, Jarlath, Damien, Fergal and Edel (McCartin); his sister Mary Heeran and brother Willie, Pat's many friends and family, our deepest sympathy on their great loss.

Also, my apologies to  Marian Crinnigan, daughter of the late Pat Egan, from omitting her name from last week's piece on her late father.