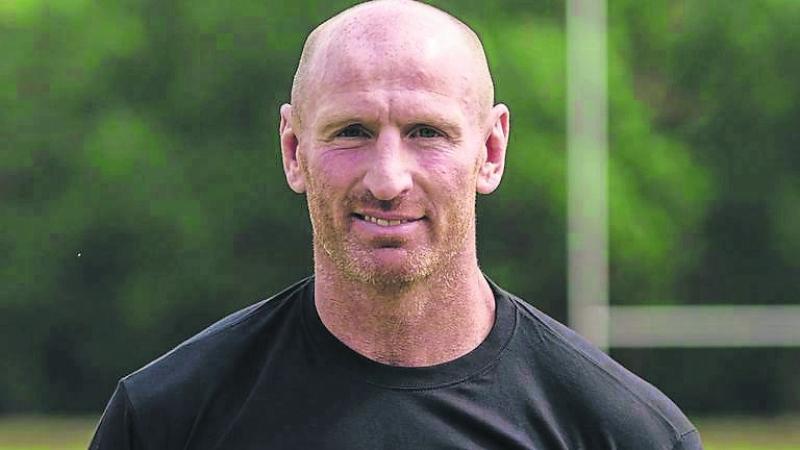 Gareth Thomas, Welsh rugby player spoke about telling his family and the world he is gay

I had the privilege in the past week of hearing Gareth Thomas speak.
I have attended more conferences and seminars over the past ten years than I can remember, but I will never forget the impact of Thomas’ personal and articulate address the Irish Federation of Irish Sport’s conference on diversity and inclusion in sport.
The big Welsh man is best known for his world-class rugby career; one that saw him captain his country and the Lions. He broke records everywhere he played and won the accolades of all he played for and against. In 2009 he announced that he was gay, causing many in the rugby and sporting world to examine their understanding of the word. (He was the first professional international sports star to come out while still playing). His intention was not to become the gay rights activist and advocate he has evolved into; it was simply to end the pain of living a lie and to literally save his life.
While concealing his sexuality resulted in him experiencing many detrimental experiences and lows, he recalled hitting rock bottom while sitting on the edge of a swimming pool with a half drank bottle of vodka in one hand a half-consumed bottle of pills in the other. He was trying to summon the strength to let himself slip into the water and stop the endless pain. His eyes well up at this point, the first of three occasions during his talk.
Ten years after coming out the scars of being forced to live a lie still mark the psyche of this gentle man-mountain.
The second time he is forced to stop and allow the wave of emotion flow over him before carrying on. He is recalling the morning he told his parents, Yvonne and Barry, in their modest Welsh homestead of Bridgend. Except Barry, a fourth-generation Welsh miner, isn’t known as Barry any more. He’s known as Gareth’s father to one and all. Thomas’ biggest fear was that his family would reject him. His announcement was met with silence. He must leave, confused and hurt, and travel abroad for a match. When he returns the next week his mother and brother are waiting in the sitting room with their glasses charged and another filled for their son and brother. His father enters and raises his glass, toasting the first of the rest of his son’s life. (Thomas explains how, on reflection, he understands it was unreasonable of him to expect immediate acceptance of his announcement – they needed time to process the information. He proudly states that they remain the bedrock on which his life is built, as they were before coming out as gay).
The third time emotion overtakes Thomas, and me in the audience I must admit, is when he recalls the standing ovation given to him by opposition fans on the weekend he publicly announced his homosexuality. While telling his parents brought the greatest fear of rejection, he was made more vulnerable by the thought of telling his team mates. Their positive response, he says, fortified him to meet any future obstacle. It also helped him realise that he didn’t need acceptance by everyone in the world, just those that mattered most to him; their love and acceptance proved unconditional.

Last week, GAA inter-county referee David Gough revealed on the Late Late Show that the GAA will have its first formal entry in the Gay Pride Parade 2019 in Dublin. David has been openly gay for some years and, along with the likes of Donal Óg Cusack and his brother Conor, flies the rainbow flag for many secretly gay men in the association. The GAA is all about identity. And we know from countless research that identity – feeling comfortable in one’s own skin – is a foundation of health and happiness. Hopefully, GAA members forced by societal constructs and perceived ‘norms’ to conceal an important element of their identity – their sexuality – can take some solidarity in the Association’s presence in the Pride Parade.

It’s interesting to note that many more members and players in both LGFA and Camogie have felt empowered to identify openly as LGBT+. There remains a significant block in the domain of male sport. This is contributed to by an outdated and misguided understanding of masculinity and the casual use of harmful language. The former is an equally destructive force in society, has permeated the sporting realm, and will a require systematic change of mindset and practices to address. The latter is something we have much greater ownership of in sport and through strong leadership can enact positive cultural change relatively quickly. We all have a part to play in bringing that leadership to life, and it involves calling out unacceptable language where ever we encounter it, be it at training, in a game, in the stands, on our squad WhatsApp groups, or in the pub.
While playing sport I was called gay (or related terms that I won’t use here) as many times as I was abused about my religion.
The fact that I’m a heterosexual male wouldn’t have mattered to the hurler of the abuse; it was intended as an insult and the inference was that I was weak or effeminate. I suppose the long hair I wore until the age of 21 was partly responsible the far-from-inspired suggestion that I was gay.
As already stated, the sporting world can suffer from a very outdated understanding of what constitutes masculinity. And the GAA hadn’t seen much long hair since the ‘70s. Put the two together and you get a lazy option for a player who feels the need to resort to personal abuse. It never bothered me. I always believed if someone felt the need to resort to verbals, they did so because they felt threatened by me as a player. But had I been gay would it have been so easy to brush it off? If any ‘banter’ in club dressing rooms across Leitrim casts aspersions on the LGBT+ community, why would a young man, a member of that squad, coming to terms with his sexuality feel comfortable coming out in that environment?
For a squad to truly gel, each member must accept all facets of his or her team mates. Trust and the ability to be vulnerable lies at the heart of that process – you can only truly be yourself and reap the associated benefits when you know your team mates will accept you for it. The same is true of a community.
The goal is to reach a place where someone’s sexuality is unremarkable and entirely their private business. We still have a way to go on that journey. In the meantime, I hope testimonies from the likes of Gareth Thomas, Donal Óg and Conor Cusack, Valarie Mulcahy, Nicole Owens, David Gough, and Lindsay Peat, and the GAA’s participation in Pride 2019, helps those still on their journey to realise that even if you are the only gay in the village, it’s still your village, and it’s your local GAA club too.
Liatroim abú.