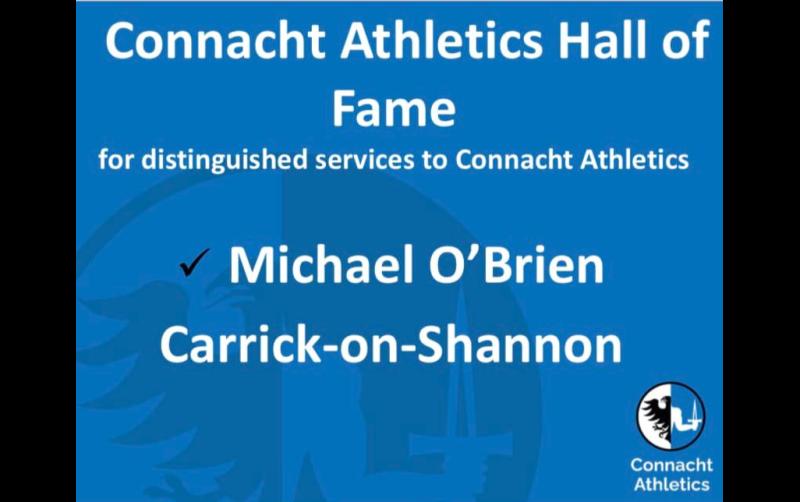 Michael, who passed away earlier this year in April, was named as the Hall of Fame winner in the awards which are set to be presented on in a special online ceremony featuring some special guests in January as Connacht Athletics recognised some wonderful achievements in their sport over the past 12 months.

Nominated by Carrick-on-Shannon AC for the award, Michael's legacy as a coach, official and mentor has been recognised by Connacht Athletics and is a fitting tribute to a man who gave so selflessly of himself for others.

In their nomination, Carrick AC wrote: "The late Michael O'Brien, who passed away in April 2021, was a hugely influential figure in Carrick-on-Shannon AC, Leitrim, Connacht and National athletics. One of the original founders of our club way back in 1973, Michael must have filled every role there was to fill in the club. Club Secretary for 25 years, club chairman, church gate collector, Connacht official, starter at Leitrim, Connacht and National events, chief organiser and track marker of the fondly remembered Carrick AC Sports, if there was a job to be done for the Club, Michael did it and did it to perfection because, for Michael, if a job was worth doing, it was worth doing right. 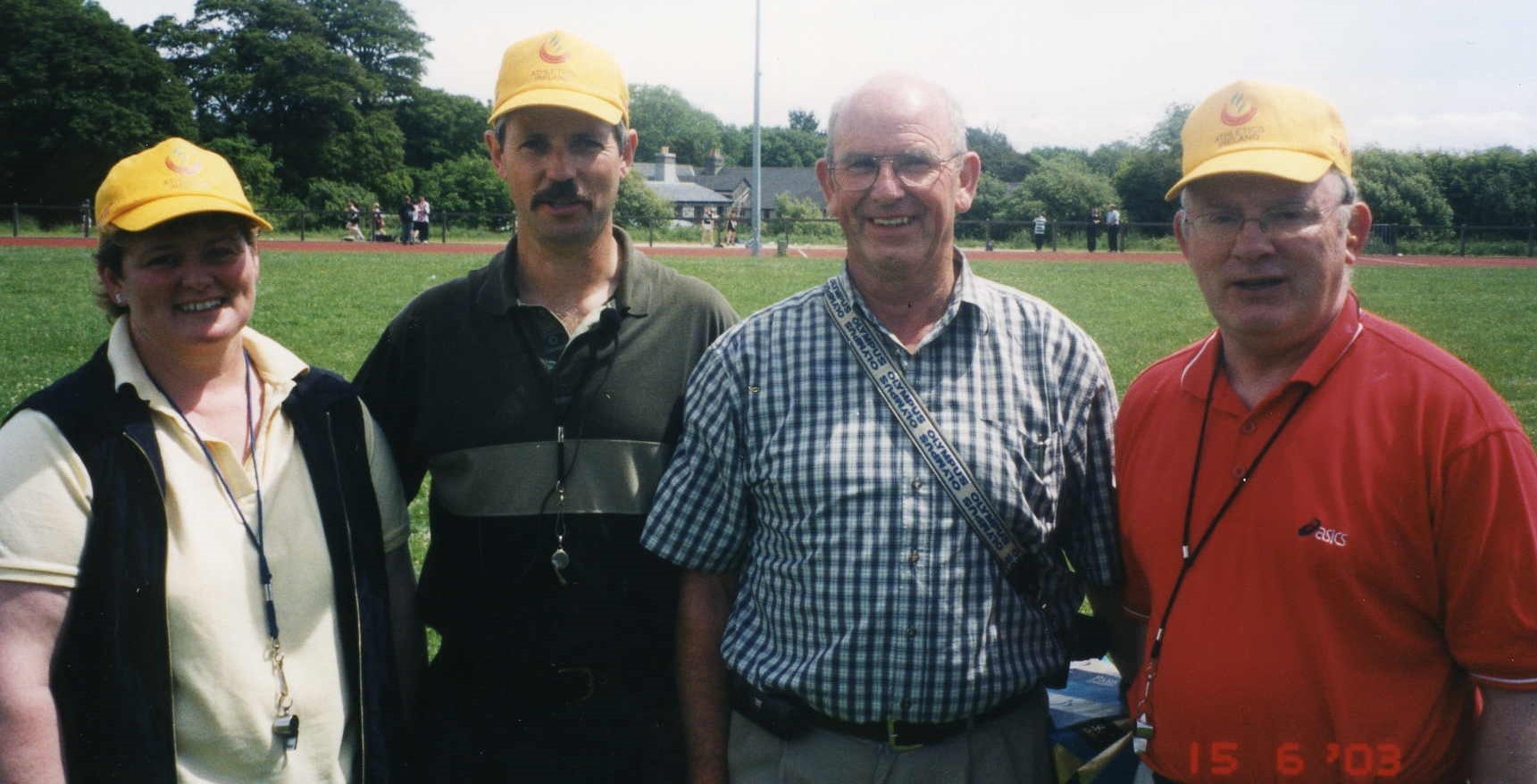 "But it is as a coach that generations of Carrick people will remember Michael and it was his greatest love. We can talk of all the All-Ireland medallists and internationals he coached, all the successes he brought to our club but that wouldn’t do justice to Michael, for he was just as proud of the efforts of the youngest child trying their best in their event. Michael had as much time for the greenest novice as he did for the seasoned star.

"As Provincial level, Michael was known to generations of athletes as a starter and his double act with Michael O’Hart was one of the familiar sights of Connacht and National athletics for years, working at National and Schools level, always giving his time freely whenever and wherever it was needed. Michael always had time and patience for every athlete on the start line but he was also a stickler for the rules, ensuring fair play for every athlete.

"Michael also helped organise the then BLE annual Congress when it was held while he also served as chairman of the Western Region for a number of years and was a regular sight at the Connacht meetings in Castlerea.

The awards feature categories covering all disciplines in the sport of athletics with some of the awards named after some of the greatest Connacht athletes. Carrick AC's Gerard O'Donnell was nominated for the Connacht Athletics Male Athletes of the Year award, Drumshanbo AC's Ricki Wynne was nominated for the Mary Cullen Distance Athlete of the Year Award and North Leitrim AC's Karen Mulvaney Kelly in the Olive Loughnane Walker of the Year Award.

European U20 1500m Champion Cian McPhillips (Longford AC) and Tokyo Olympic Marathon 10th placer Sinead Diver (Mayo) have been voted the Connacht Athletes of the Year 2021 by a panel of 15 experts. McPhillips had an exceptional year making the semi-final of the European Indoor 800m and breaking his fellow Longford man Ray Flynn’s Irish U20 1500m record in the process.

He beat off strong opposition including two Tokyo Olympic relay finalists Chris O’Donnell (North Sligo) and Cillín Greene (Galway City Harriers) who had the consolation of sharing the Paul Hession award for the Connacht Sprinter of the Year.

Sinead Diver broke new ground for both Ireland and her adapted Australia when she took a magnificent top 10 placing in the Tokyo Olympic Marathon. The Belmullet woman, who is based in Melbourne but still a proud member of Mayo AC was the unanimous choice ahead of World relay medallist Sarah Quinn (St Colman’s South Mayo) and Swinford’s throwing sensation Michaela Walsh.

Galway’s Robert McDonnell won the U20 Athlete of the Year category for his 5th place finish in the European U20 200m final while Sligo-woman Erin Taheny won the women’s equivalent for her National sprint double.

The U18 categories were also top notch and the men’s award went to Liam Shaw (Athenry) who at 16 became the youngest ever Irish U20 Shot Put Champion as well as winning International Schools bronze while teenage Galway jumps sensation Angela Cielecka won the women’s equivalent over a very competitive field.

Fresh from his top 6 placing and team gold at the European Cross Country Championships in Dublin last weekend Keelin Kilreehill was voted the Connacht Cross Country runner of the year while Freya Renton (Westport) who won two National underage Cross Country titles this year has never been beaten in a Cross Country race.

The Masters awards were won by two long serving stalwarts of the sport at National level – Kathryn Casserly from Castlegar who has won over 30 Irish titles took the women’s award and the ever young Sean Breathnach took the men’s award.

The John McDonnell Connacht Coach of the Year was perhaps the most competitive award of the night and in the end the judges couldn’t separate Philip Finnerty for his trojan successes for his native Moy Valley and Brendan Glynn for his major impact in raising the level of Connacht sprinting including a hand in two of the mixed relay team in Tokyo as well as coach to Sarah Quinn who won a World Relay medal.

The Fr Kevin Ryle award for the Connacht Official of the Year was shared between Connacht Council Secretary Amanda Hynes (Swinford) and Athenry’s Iain Shaw, without whom no Connacht Championships could take place.

The club of the Year was shared between Moy Valley and Craughwell as two outstanding clubs who hare operating at the highest level in terms of athlete numbers, organising events, national medals won, and facilities built.

The Development club of the Year went to the popular newcomer Loch Lurgan who were only established in 2018 but already have 150 members, the best dressed athletes in the province and numerous athletes qualified at National level.

The prestigious discipline awards named after legends of the sport in Connacht went to:

Billy Glynn Medal to the Connacht Jumper of the Year: Evan Hallinan (Craughwell)

The Pride of Connacht Athletics Inspiration Award: Shared by Jessica Burke (Galway City Harriers) and Craughwell’s Shauna Bocquet for their inspirational deeds in raising funds for a track and finishing a race with a bleeding nose against all the odds.