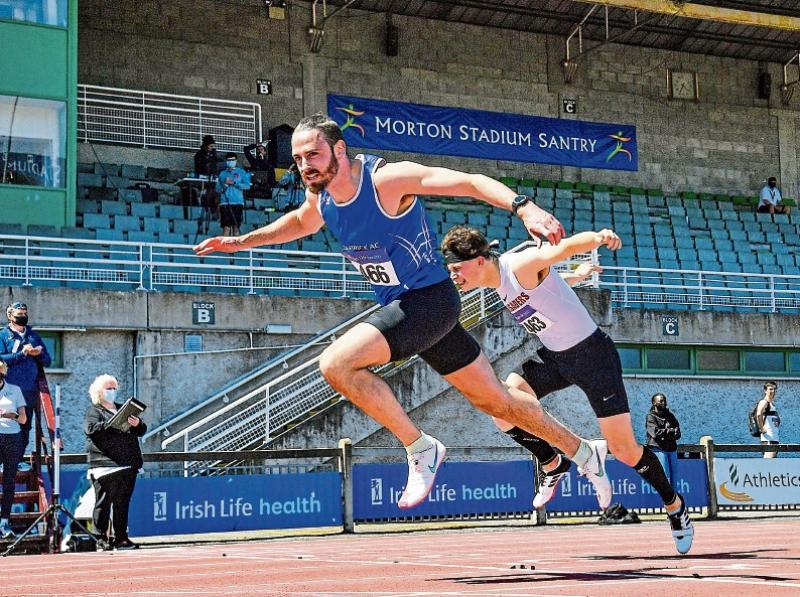 The Late Late Show has been number one on Irish TV for so long that it is almost like the turning of the seasons. It is becoming that way for Gerard O’Donnell as the Carrick AC utilised his trademark late finish to claim his fifth National 110m Hurdles title in a row last Sunday in Morton Stadium, Dublin.

The Irish Life Health Athletics Ireland Senior Championships saw O’Donnell claim a sixth title overall and it came in an old familiar style, the Leitrim man hauling in the fast starting Matthew Behan of Crusaders to claim the title in a time of 14.04 (wind +2.9 m/s).

Speaking to the Observer, Gerard agreed the race followed a familiar storyline: “It was the usual me versus Matthew Behan - a comeback story. I was hoping it wouldn’t be as nerve wracking as previous years but it was probably the worst yet. I knew from the two races I had with him in the AAI Games, his start is as good as ever, he is a world class starter and he always makes me work hard.”

The race was not without a bit of drama as Behan hit a hurdle and almost came into Gerard’s lane: “I got out a bit better than usual so I was a bit closer to him in the first half of the race . I was expecting to reel him in as I usually do but it didn’t come until a bit later in the race and once he hit hurdle seven hard, I knew I could just hopefully breeze past.

“Actually, he nearly came into my lane so it put me off a little bit so I had to switch back on again. It came in the end and I got a decent time out of it too. Just delighted - all I wanted to do at the nationals was get across the line first and that is what happened so happy days.” 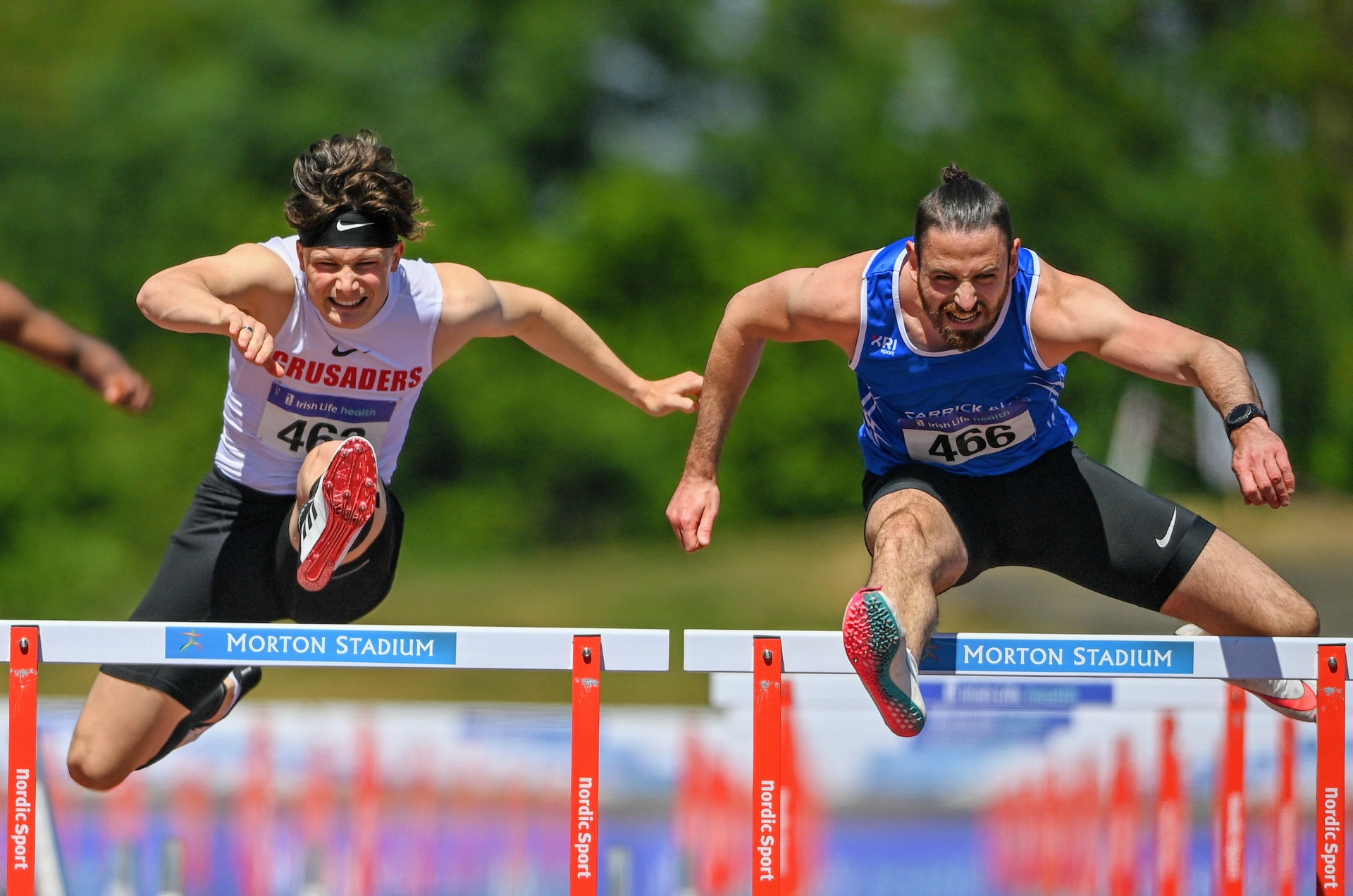 We’ve called it his trademark fast finish and it seems that even his rivals are expecting the Leitrim man to come breezing past in the final metres! “At the AAI Games, I did it to him twice and Matthew said to me on Sunday that I’m just waiting for you at hurdle five to go by me, it is like I’m just passing the baton to you and you take over. That was the first time he admitted to me. Obviously it is good in a way that it is in the back of his mind and it is in the back of my mind in a positive way.”

Smooth hurdling and keeping cool under pressure is the secret to Gerard’s amazing run of success: “That’s the main thing, to just have a smooth race. Once I don’t hit hurdles, I can maintain that velocity throughout. Losing momentum towards the end is where the mistakes take place so I suppose I can trust that if I can just be smooth, and that’s what I am really good at, and that will carry me home.

“A few people have said to me that composure is what I do best but it is not something that I'd want to be relying on - ideally I’d have a really good start but that might take away from my strong finish so I suppose it is more of an evenly paced distribution of effort.”

Neither does the 33-year-old show any signs of slowing down - with six titles, he is four off the record for the most titles won in the event and the Carrick AC man sees no reason why he shouldn’t keep going.

“Sure why not! I wouldn’t rule out four or five more!” was his laughing reaction but he added “After 2019, it was a funny year, it was my best year in terms of success, two internationals but it was the year I actually ran the slowest in the last four or five years because I was running off two dead achilles tendons. But at the end of that season, I was like, is my body giving up on me now, am I getting to that stereotypical age where people used to retire.

“I was thinking Europeans the year after and Team Champs this year, that’s what I was focussing towards so I suppose if you told me at the end of 2019, there would be nothing but the national championships for the next two years, I probably would have considered packing it in.

“But I ran my fastest 100m ever two weeks ago and I think I’m in pb shape at the minute for the hurdles but for an achilles injury I’m carrying. As long as I’m still running fast, I’m going to keep going because why would I ever stop before you have to stop! Once you stop you’re done.” 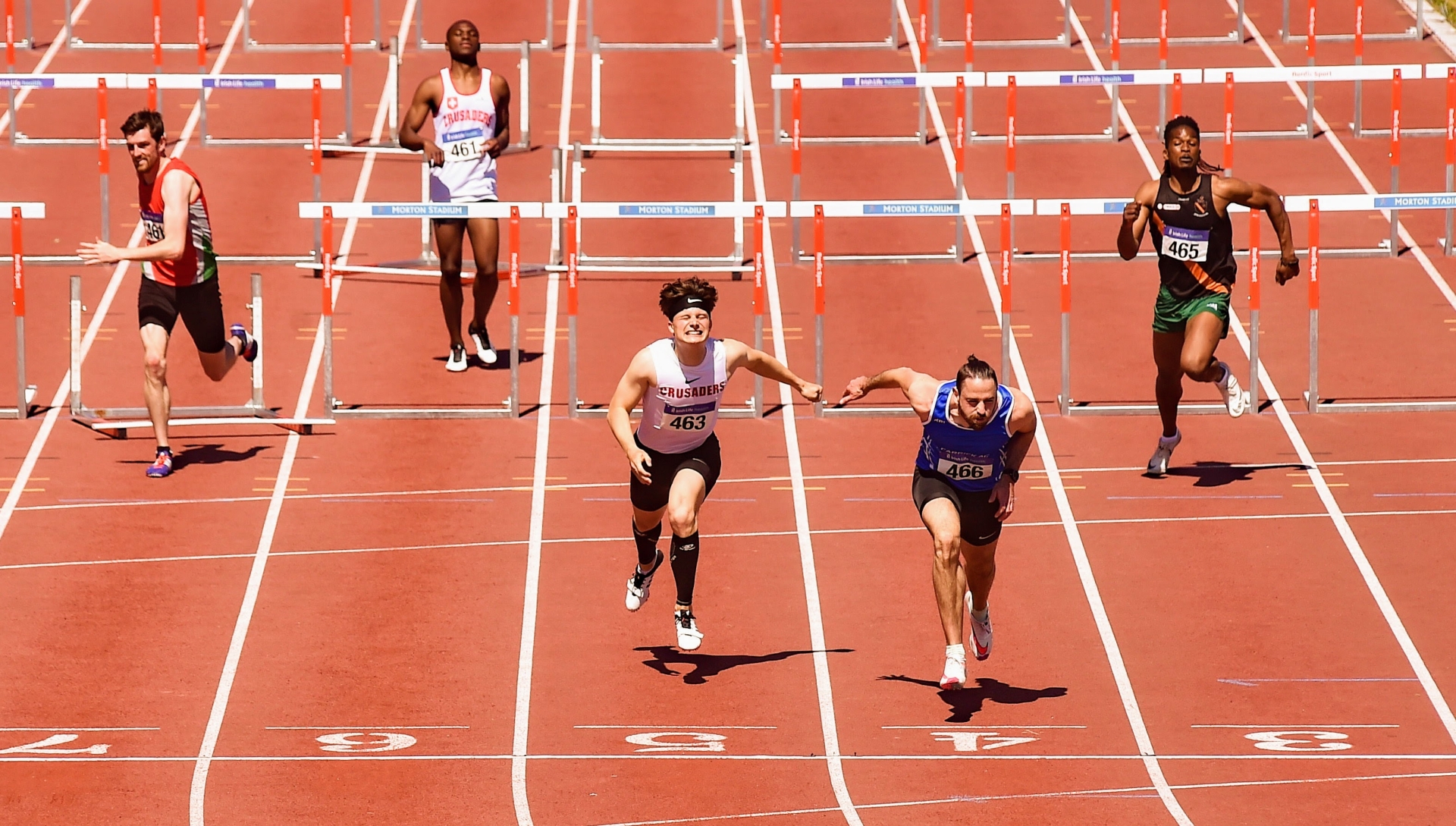 The Championships was a very busy weekend for Gerard as he is one of the lead coaches with the Dublin Sprint Club, with Jeremy Lyons and Aileen Sinnott, but he believes that his coaching commitments have helped his own sporting endeavours!

“It definitely keeps me focussed because when you get into your 30s, you’ve a lot more going on and the small things you do as an athlete, the little bits and pieces here and there, can slip away because of different priorities. But when I’m coaching, I have to keep on top of it because I can’t be preaching to them to do and not do it myself. I’d be a complete hypocrite and there’d be no buy in from the athletes.

“So I have to be on my toes looking after my own self in terms of my training, my physio, my diet so that they can see that I’m doing it and they can do it and it will work. That mightn’t be the case if I wasn’t coaching.

“I love helping the guys out. Before the 400s at the weekend, I was more nervous than I’ve ever been for any of my own races and that was just watching the guys. You have no control over it, you’ve done whatever you can do to help them but ultimately, they are the ones who are going to have to do the race. I nearly get more of a buzz seeing them do well than I do out of my own performances because I see how much work they are putting in. It was a great weekend for the group.”

One final note from Sunday’s Final was the unusual sight of Gerard literally continuing on around the track after his race and down the back straight to celebrate with his group and his mother Mary who was one of the lucky fans at the championships. And it was something Gerard had thought about.

“I never want to be counting my chickens but I was thinking the day before, if I do win, I’m just going to keep going because that’s where everybody who is there to watch me and who helps me, trains with me, that’s where they are. I just said feck it, I might make a fool of myself but I’ll keep jogging around the bend, give a clap to the people who did come in to see.

“Then Mam was there, I got to give her a hug, we’re both vaccinated so it’s ok. It was brilliant to have her in the stadium, I’m sure she was a bag of nerves. She got to watch my whole warm-up, something she wouldn’t normally get to see so I suppose it was a bit of a unique experience for her.”