Drumshanbo VS qualify for Schools A volleyball with steady showing 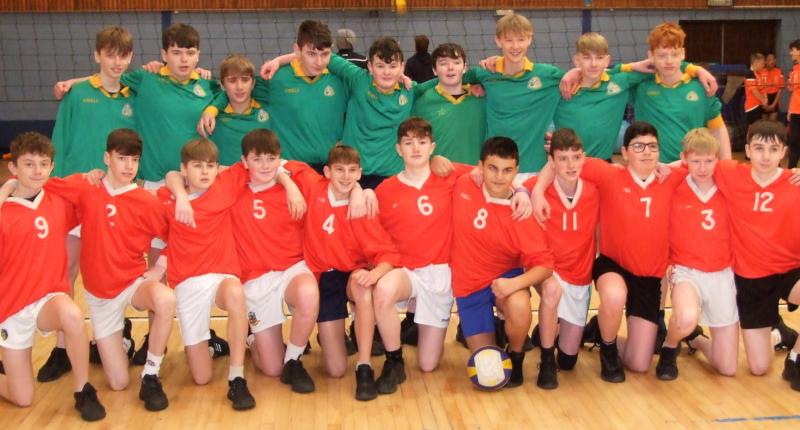 Drumshanbo VS Junior volleyballers qualified for the A competition with a steady performance in Ballinagare last week.

Last Wednesday four teams of boys converged on Ballinagare community sports hall for the Schools Volleyball. But this group were different. They were the students who, up until a few weeks ago, had never played volleyball without covid restrictions. Amazingly, they have learned the game despite that, and showed great promise that they too will carry on the tradition. For Drumshanbo, PE teacher Breda Travers must take a lot of the credit.

After Elphin A and B had opened the day with a very tight contest, it was the turn of the expected stronger teams from both schools to face each other.

The game opened very level to 5-5. Zach Winters and Jakub Zapala combined very well for early scores. Then Brian Nolan served Drumshanbo ahead 9-5 with Ronan Guckian and Darragh McCormack also combining very well as Drumshanbo kept ahead 13-8. Drumshanbo, however, were not used to the very high roof and Elphin’s Lorcan Beirne capitalised on that to produce a serve run that levelled it at 13-13. Mark Nolan hooked on to very difficult passes and it was still level at 18-18 when Elphin’s Izan Martinez produced another run to 23-18 and Elphin took the set.

Elphin continued to dominate the 2nd set, leading 5-2, and although Drumshanbo levelled at 12-12, Alvaro De Santaigo served Elphin to 15-12 and they still led 17-15. Daniel Gilrane came on in this set and his receive of service and serve kept Drumshanbo ticking. The next to serve for Drumshanbo was Jack Beirne who had also come on in the game. His unique serve just whizzed over the net and he gave Drumshanbo a 20-17 lead and they never looked back from that.

It looked like a daunting task for Drumshanbo and, down-5-16, it was. But then they began to break the Elphin serve. play from Rhionn Gallagher and James Tighe helped to pull it to just 15-21 behind. Oisin Lynch sent across 2 winners to break Elphin’s serve twice. Also contributing were Kaelin Spark’s good receive of serve, Ben Clarke’s passing and Eoghan Connolly’s serve. Gallagher’s serve got it as close as 21-23 but Elphin avoided the upset.

Perked up by their play at the end of set 1, Drumshanbo went on the offensive with Jenson Lawlor firing Drumshanbo into a 6-1 lead. After Elphin levelled at 11-11 Lawlor again served them 15-13 ahead. Elphin levelled again at 18-18 and just managed to crawl to victory.

Drumshanbo’s James Winters made a great debut serving them to a 4-1 lead. Elphin ‘s rallied to 8-7 but Brian Nolan, Beirne and McCormack served them to a comfortable set win. Elphin shocked Drumshanbo by pulling 8-1 ahead in the 2nd set and it took a run from Ronan Guckian before it was level at 11-11. From there Drumshanbo took control ending with 5 serves in a row from Aaron Gallagher.

The match was close to 7-5 and then Jack Early’s 4 serve opened up a gap at 12-5. Later Rhionn Gallagher was serving so well that manager Shane Hegarty decided to rest him! Drumshanbo won the set well. Keelan McGlynn caused a sensation for Elphin early in the 2nd set when his 10 serves gave them a lead of 13-4. They still led 20-17 before Pierce McKeon’s 7 serves gave Drumshanbo bragging rights in this battle of the Bs.

Drumshanbo A duly edged ahead throughout the 1st set but a great serve run by Lawlor put the Bs 7-1 ahead in the 2nd set. They held the lead all the way to 23 22 to be just pipped for a surprise result.

On the day Drumshanbo seemed to have the better handling and combinations and, with more organising of positions, can follow in the footsteps of all previous teams.