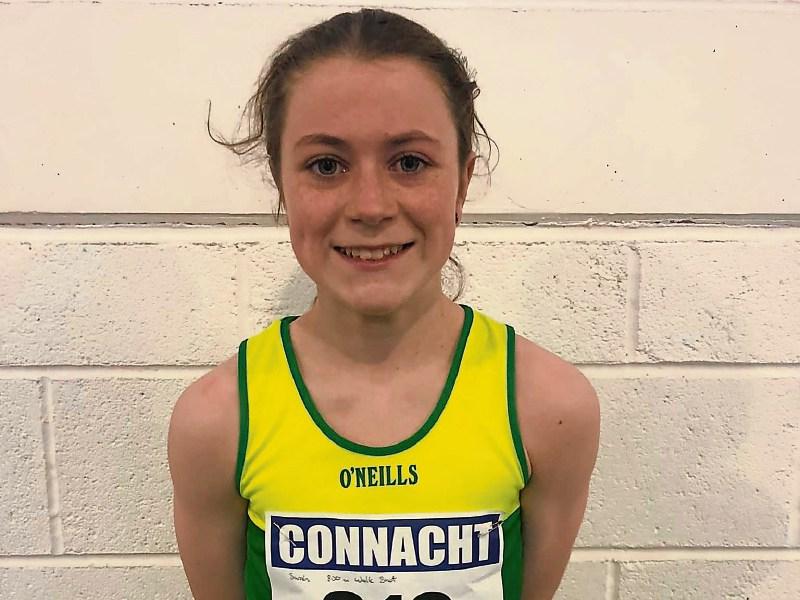 Sarah won gold in the U14 Girls walk in a time Connacht record time of 4.48.79, winning by nearly half a minute while she went on to claim a silver medal in the U14 shot with a throw of 9.15m and bronze in the 800m for the complete set of medals on the day.

Sarah's North Leitrim clubmate Susanne O'Beirne also took home a complete set of medals with gold in the Over 35 Shot, silver in the 400m and bronze in the 800m while her daughter Sara took silver in the U18 shot.

North Leitrim AC had plenty of success in the walks and shot with Karl Casey (U13) & Rachel Keaney (U18) winning gold in their walks along with silvers for Keilan Carroll (U12), Ian Harkin (U13) and Luke Fitzmaurice (U16) and a bronze for Keefe Dolan (U14).

Ballinamore AC's Setanta Glesson finished third in the U16 walk while clubmate Guy Conway won the U12 boys walk with a strong display.

Sarah Brady turned in a solid performance to clock 5.01.67 to win the Senior women’s 1,500m while Carrick AC’s Ann Wynne won the O50 800m title. Her clubmate Michael Duignan finished second in both the M50 High Jump and 400m as well as competing in the 3,000m.

Carrick's Declan Kennedy & Cathal Enright both picked up bronze medals in the U16 middle distance races, Declan in the 1,500m with his brother Patrick fifth, and Cathal in the 800m while Clara Doherty finished fourth in a quality U16 Girls 1,500m.

Anna Trench Winston produced an excellent effort to win bronze in the U13 Girls long jump with clubmate Poppy Doherty joint fifth. Anna also finished 8th in the 60m with Poppy 12th. They teamed up with Carragh Guckian and Saoirse Hanly to finish sixth in the relay.

Carrick's U15 Girls teams of Anna Keane, Sarah Meghan, Isibeal Dowd and Amy Murtagh finished fifth in their relay with Murtagh eighth in the 60m. Shane Murtagh finished 13th in the U13 60m while Tom Trench Winston was 11th in his race.