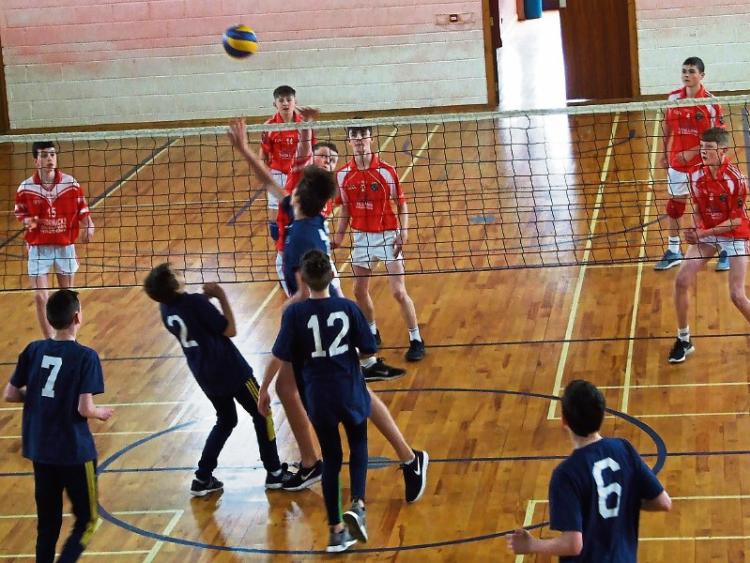 Drumshanbo Vocational bookended two great performances to advance to the last eight in Junior A and the last six in Junior B last week in Streete Westmeath.

The Junior As started the day with a scintillating first set against All Ireland Spikeball Champions Sutton Park Dublin. Then the Bs, after Laois team Mountrath levelled their match, ran away with their final set.

In between was some very tight games which tested the metal of both sides.

The first set performance of the As was astonishing. They blew away Sutton, aces and spike winners from Barry McWeeney. Saves on Sutton's spikes from Dylan Easterbrook and precision setting.

Great reactions from Shawn Meehan plus pinpoint serving. Blocking by Evan Foley. Block beating by Emmett Moran and, even a run of serves from total newcomer Eoin Guckian.

But just as they seemed to be world beaters and up 2-0 in the 2nd set the errors came back. Serves were missed and balls were sent just out. Sutton were not champions without skill and they returned the ball time and time.

Drumshanbo came under pressure and tried to hit winners from very difficult balls. Sutton ebbed ahead 12-6 and 15-10. At 16-11 the referee reversed a decision that turned 17-11 into 16-12. Sutton could not understand and it broke their concentration.

McWeeney aced to level and Guckian served Drumshanbo to 24-18 with sub Ronan Moran setting very well. The referee allowed a lot leeway to Sutton from there and, to their credit they fought back but Drumshanbo survived the storm.

After their very close matches all season, the Bs must have felt they were dreaming after the first set.

With huge runs of serves from Daniel Curran and Pablo Martúnez Megina and great combination play between Jake Tobin and Daniel McWeeney, after being 3-4 down, Drumshanbo hardly put a foot wrong.

In the second set a series of missed serves and misjudgements put Drumshanbo 9-12 behind but a Carlos González De Luna run of serves to 15-12 saw them in the driving seat to 22-20 with Megina and newcomer Garry Corcoran combining well. More confusion and errors handed the set to the Laois side.

If it did, Drumshanbo were straight out of the blocks in the 3rd set with serve runs from Curran and Tobin to lead 6-2. Another run from Curran while Corcoran combined with Megina left it 19-10, and Tobin smashed down a winner at match point.

After their first round nobody would have believed Drumshanbo would reach the national last 6 while nearly all their seeding conquerors have been knocked out.