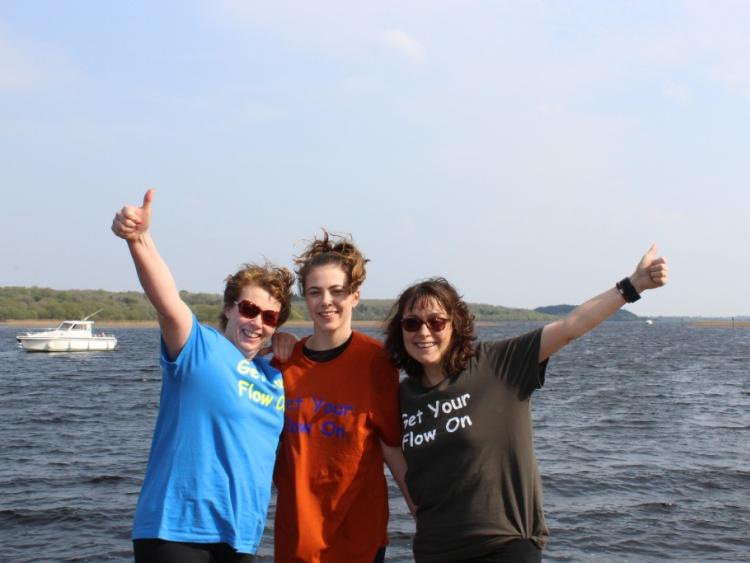 On Sunday morning last the Flo Beo swimmers, Heather and Eileen Maxwell and Toni McGlynn safely arrived in Limerick as they became the first women to swim the entire 245km length of the River Shannon.

Having started in Dowra on August 1, the ladies navigated the country’s longest river in sometimes very difficulty conditions before arriving in Limerick.

They returned home to Annaduff on Sunday evening to a heroes reception. Cllr Sean McGowan paid tribute to the trio saying: “I want to congratulate Eileen and Heather Maxwell, Toni Mc Glynn their families and their wonderful support team on their magnificent achievement of swimming the length of the Shannon from Dowra to Limerick in the aptly named Flo Beo Shannon Swim.

“This is the first time ever that the Shannon swim has been undertaken by women and they deserve great credit for not only taking on the challenge but sticking with it through some very rough and tough days.

“I’m sure Eileen, Heather and Toni are wrecked after their swim and they truly deserve a rest after their exploits over the past month. Also, I have to compliment them for choosing two very worthwhile charities which will benefit as a result of their great effort, namely Lust for life and Irish Cancer Society.

The ladies were accompanied by cruiser driver David Price as they swam for the whole month of August. Eileen’s husband Frank and daughter Cora were also by their side for most of the journey and Seamus Duignan was on hand for five days with the Longford Scuba Divers rig.

The ladies have to date raised €4,392 for the two charities. If you would like to make a donation you can do so by following the link on the Flo Beo Shannon Swim Facebook page or by clicking here.