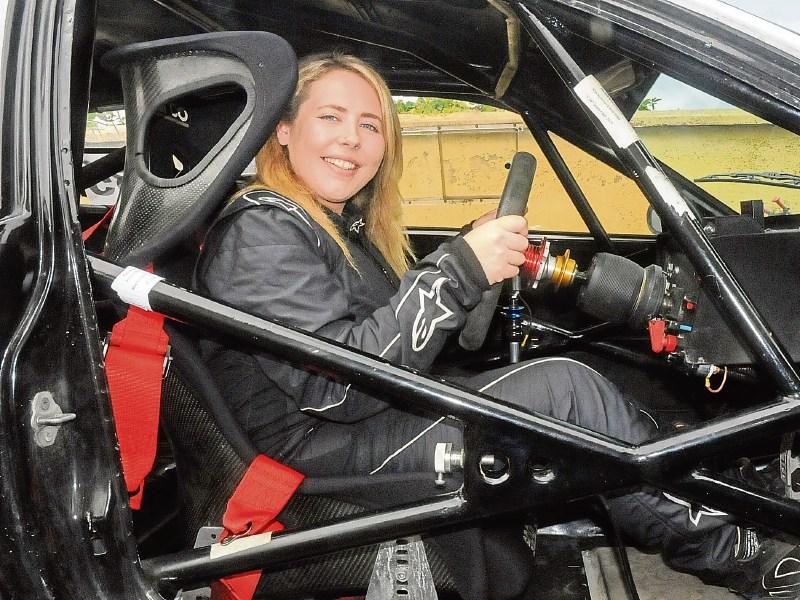 Colette Rooney pictured in the driver's seat of her racing car at the family farm in Kinlough Picture: Willie Donnellan

It is a quiet, peaceful part of the country but Kinlough’s Colette Rooney is loving life in the fast lane and with good reason as she won a race at the prestigious Nutt’s Corner near Belfast at the beginning of July.

Colette, a nurse by profession and a racer by vocation, won the Class 7 event for 16 value engines between 1651 cc – 2100 cc at the famed Antrim venue on July 4, winning six of her seven times efforts to take just her second ever victory.

When the Observer visited the family farm on the Leitrim Sligo border, Colette was pretty matter of fact about her wonderful victory: “I won all except one where my tires started going on but that was my dropped score. That last event was very close, it was tit for tat. On most of the runs, I was gaining two or three tenths or four tenths of a second.”

Under the auspices of the Rally Sport Association, events are held at venues like Nutt’s Corner, Mondello and Tynagh in Galway and sees racers take part in seven times runs over the course of the day with the best five counting towards the overall score and Colette took the victory with an overall time of 13 mins 42.5 seconds, just over five seconds clear of the second placed car.

Lest anybody get confused, the world of RallySport is far removed from the glamour and big money of formula 1 or even World Rally events but you sense that quietly spoken Colette prefers it that way!

Joking “Definitely no private jets” and when asked about the prize she received for her effort, Colette revealed “It is just a trophy, it really is for the love of it. It is a good atmosphere, everyone gets on. It is friendly but it is still competitive but you make loads of friends at it and I have done so down through the years. There is lots of time for chatting during the day, a lot of the same faces. 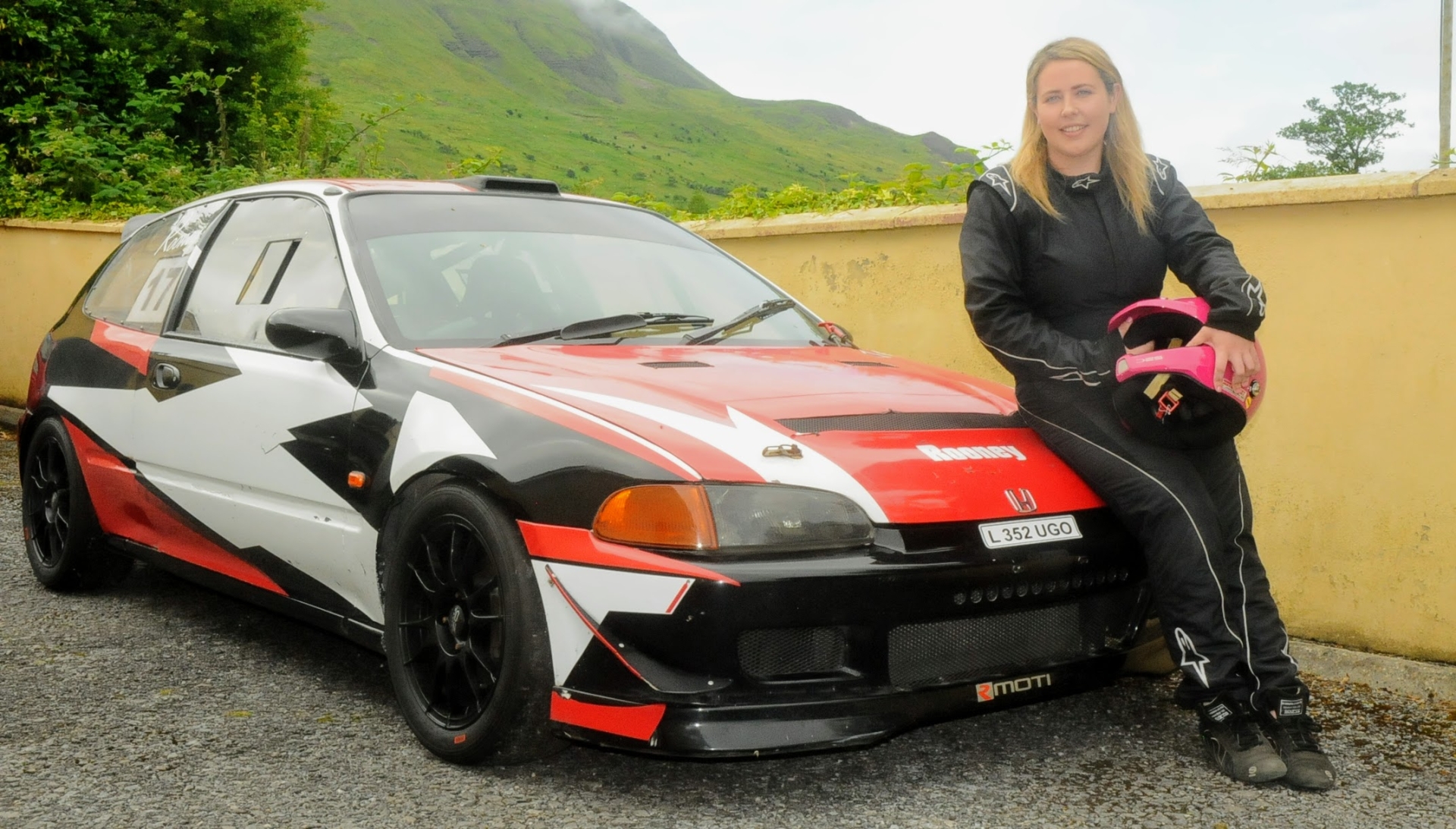 Colette Rooney pictured at her family home outside Kinlough with the car she drove to victory in Nutt's Corner Picture: Willie Donnellan

“RallySport Association run events in both the North and the South and you always get a good day out with them, you get good time on the track so they are proving very valuable. Usually they get going around 10.30 am in the morning and we’d be finished up around 4.30pm.

“We get about seven timed runs, each run would be on average about three minutes so you’re talking over 20 minutes driving which doesn’t seem like a lot but compared to a lot of places, it is and when you’re out driving, it is fairly intense!

“Often you wouldn’t be hitting top speeds because they are not that long of a straight but you’d be talking 80 to 100 mph at Nutts, Mondello would probably be faster again because there is a good long straight. But it is fast enough when you are doing it.”

MOTORING REVIEW: Now I understand why the future of motoring truly is electric

Colette got her start thanks to the influence of brother John who started racing a year before she did back in 2008 but the sight of rally cars taking part in the Sligo Stages Rally also fuelled her imagination!

“Thirteen years I started, which is hard to believe - took me a while to get good at it!” she joked before adding “I always like watching rallies on TV and the Sligo Rally would have gone by our house many years ago and I always liked watching it. My brother started competing in 2007 and I followed suit in 2008.

“My brother John races, he would always be racing but at the moment, he is working nights and weekends so he hasn’t been out as much yet but he will be getting out in the next month or so.”

So just how do you become good at racing cars at incredible speeds around roads and tracks? Well, it turns out that it much the same as everything else in life! “Practice, practice, practice” is Colette’s concise summary!

But of course, that entails sacrifices as you can’t have racing cars tearing up and down the roads and boreens of Leitrim so Colette travels long distances to get the necessary practice in: “Sometimes you could go to a track and hire it for a day or half a day or Mondello would have track days.

“The more seat time the better. For me, it didn’t come overnight, it is just sticking with it. Unfortunately the location here isn’t great, we’re at least two hours away from all the tracks. Even to practice, there really aren't any facilities around here so you have to be fairly committed to set off and do a day’s practice here and there.”

At the speeds they race at, Colette agrees you need to have your wits about you when racing but admits that she much prefers track racing to road rallying: “You need to be wide awake doing it, things come up fast but there are times that everyone gets caught out, I’ve been there too. Thankfully, the track racing is really safe and I haven’t had anything worth mentioning, just run off the track.

“The road rallying I did for a few years and that could be pretty dangerous. Mom would have been the worrier, she’s happier I’m not doing the road rallies any more. I prefer the track racing to be honest, it is cheaper, cheerful, safer and more competitive really with the numbers who are taking part. It is very enjoyable, you get to chat with everyone on the day.” 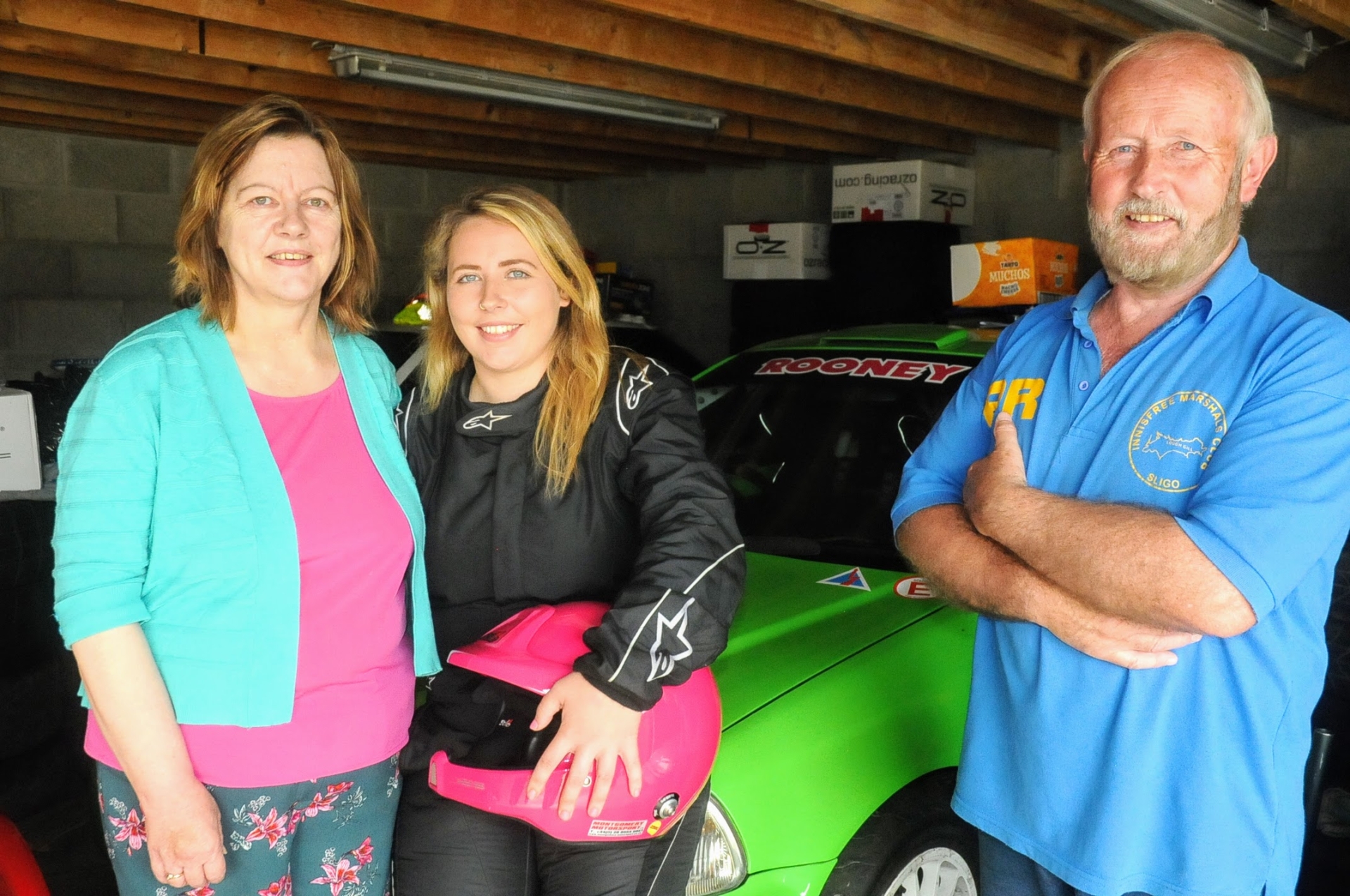 Colette Rooney pictured with her mother Rosaleen and father Padraig in the garage at the family home in Kinlough Picture: Willie Donnellan

Racing cars is not cheap and Colette is so thankful to sponsor BMG Hardware in Bundoran for their support: “Most people would build their cars and to be honest, you could go anything. My first rally car, I paid €1,000 for it, it was a little 1.2 litre Nova. Then there are Mark 2 Escorts which are very highly modified, they are over €100,000, we wouldn’t be anywhere near that. We’d be talking maybe €20,000.

“I have BMG Hardware in Bundoran sponsoring me, Brian has been very good. I did try when I was doing the road rallies to round up a few sponsors but it is easier said than done.”

Her dad Padraig, who lined out with Leitrim and is heavily involved in the Melvin Gaels club, is part of her pit crew on race days: “Between myself and Dad, you’d be hoping you wouldn’t have to do much on the day, maybe changing around the suspension or change tyres so if it was anything major, your day would be gone, you’d be out of the event.”

Working as a nurse in Sligo Hospital is a high pressure job, especially over the last 18 months with Covid, but Colette loves combining the two: “I’ve been racing before I was nursing so it has always come with me. My colleagues are used to it at this stage. I’ve been doing it for so long.”