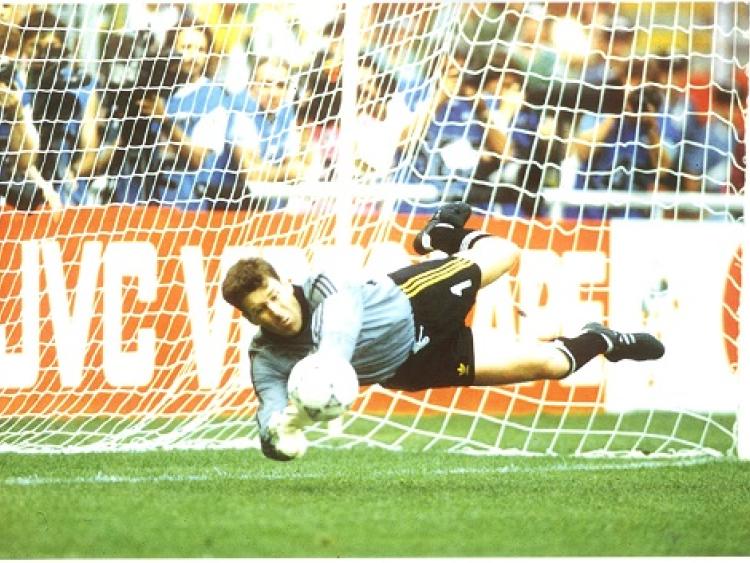 Packie Bonner makes the vital save in Genoa

The Irish have spoken: Packie Bonner’s penalty save at Italia ‘90 is voted favourite Irish moment ever while 1 in 10 of us, oddly enough, would like to spend St Patrick’s Day with Leo Varadkar.

One in five people (21%) said that Packie Bonner’s penalty save against Romania at Italia ‘90 is their favourite Irish moment ever, 17% said it was the vote to legalise same-sex marriage in 2016, another 17% voted for Riverdance, while 13% of us said it was the O’Donovan brothers winning an Olympic medal, according to research published by Brady Family Ham today.

The survey, conducted by Core Research among 1,000 people, found that one in ten of us would like to spend the St Patrick’s Day parade with An Taoiseach Leo Varadkar TD while the celebrities we would most like to spend the parade with are Ladybird star Saoirse Ronan and Peaky Blinders star Cillian Murphy.

13 percent also said they’d like to spend the parade with Conor McGregor, 11 percent with Daniel O’Donnell, and 6 percent with model Roz Purcell.

The research was commissioned by Brady Family Ham as the brand launches its ‘Low Food Miles’ campaign this month, celebrating its Irishness and the fact that it is 100% Irish, always.

On Saturday, 39% of us will watch Ireland take on England in the rugby while one third of us (32%) will watch or attend a parade.

Despite what people might think, the Irish language is far from obsolete as 1 in 10 claim to speak Irish at least once a week with females (69 percent) claiming to speaking Irish more often than males (65 percent).

We all know a cúpla focail that will help us prove our Irishness but the real test is in the writing. The survey shows that 75 percent correctly wrote “Hello, how are you?” in Irish.

Glenroe and Father Ted were ranked by survey respondents as the joint number one most Irish television series ever made, followed by Ros na Rún and Mrs Brown’s Boys.

The Irish are spread far and wide—but that doesn't mean they don't miss home. Brady Family Ham asked Irish people what they missed the most about Ireland when they're abroad: over a third (34 percent) said the Irish sense of humour, a quarter said Irish food, and 18 percent said a cup of tea. 11 percent said their dear auld mammy--and a peculiar 7 percent said they missed the weather.

While we might not all be able to agree on the best Irish dish, there’s no doubt that we’re all mad about real Irish food.

When it comes to buying food in general, 80 percent check food labels before buying the product and over half (56 percent) look for produced in Ireland messaging on the packet. 97 percent of people agree that restaurants and cafés should credit Irish suppliers when using Irish products.

The ‘Low Food Miles’ initiative is designed to highlight food origin and the distance meat travels from farm to plate— its ‘food miles’. Locally sourced meat that travels from an Irish farm to an Irish supermarket is noticeably fresher, has a lower impact on the environment and trust and quality is guaranteed. Brady Family Ham is committed to providing its consumers with produce that is 100% Irish, always.

Commenting, Mairead Golden, Marketing Manager at Brady Family Ham, said: “The majority of Irish consumers look for a ‘produced in Ireland’ label on their food products, not knowing that it doesn’t always necessarily mean farmed and produced in Ireland. Brady Family Ham is always made from 100% Irish pork, so we are proud to say that all our products have Low Food Miles.”