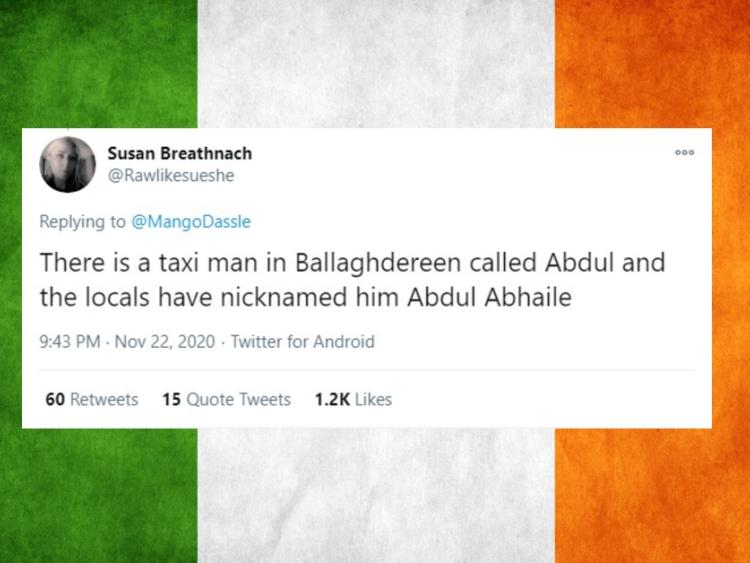 Twitter was awash with Irish people sharing the funniest nicknames they've ever heard earlier this week, and the result is the belly-laugh we all needed.

Sometimes you just have to sit back and bask in the ingenuity of the Irish public, and this Twitter thread is a prime example of that.

Dublin rapper Mango, in need of a Sunday night/pre-Monday pick-me-up, set the thread in motion by sending out a call on Twitter for the funniest nicknames.

Alri, I need a cheer up.
What are the funniest nicknames you’ve heard

With over 1,000 replies, over 700 retweets and 2,100 likes - the response has served up plenty of gems, and it's hard to top some distinctively Irish humour.

Here's a selection of our favourites:

Fella who gets called spider because he went shopping one day and bought four pairs of jeans.

My mate is called Beefy cos he was always the smallest of the lads. Also knew a fella from Tallaght called Beebaw coz he got knocked down by an ambulance

There was a boy in Armagh called The Child of Prague because he was always staring out the window.

We had two Spanish exchange students in our school, both called Jose. One was very clearly the more dominant of the pair so he was Jose and his pal was Hose B.

Also a lad who kept getting engaged and then breaking it off. So he was christened Lord of the Rings.

Lads used to play football with a guy called Enda May. Everyone called him June.

Lads used to play football with a guy called Enda May. Everyone called him June.

Knew a lad called Buckets, because of the way he held his arms when he walked, looked like he was carrying invisible buckets. My Da has a buddy called Pothole "to be avoided at all costs"

Knew a lad called Buckets, because of the way he held his arms when he walked, looked like he was carrying invisible buckets. My Da has a buddy called Pothole "to be avoided at all costs"

My Da has a mate called Jaws. Apparently he had a ferocious appetite as a child. He has a son around my age, his nickname is Jaws 2.

A kitchen fitter friend called his labourer “Geldof”, because he didn’t like Mondays

Fella I work with is called Pepper, he has a bit of an imagination. I asked one of the lads why they call him Pepper. He told me to take him with a pinch of salt

There were identical twins who lived in our town. One was called Eoin (which up home was often pronounced “On”) so they both became known as “On” and “Off”.

My Uncle worked in Dublin corporation and himself and two of his mates were called John, to distinguish them one was Johnny Cash (payroll), Johnny Flash (electrical I think) and the last fella Johnny Trash (waste management)

I know a girl who was once called ‘Jesus’ because her parents’ names were Mary and Joseph.

Know of a fella who has one hand bigger than the other and they call him "the clock".

I know a guy called 'The Exorcist' because he'd never leave a house party 'til all the spirits were gone.