Looking back at what made the news in February 2020 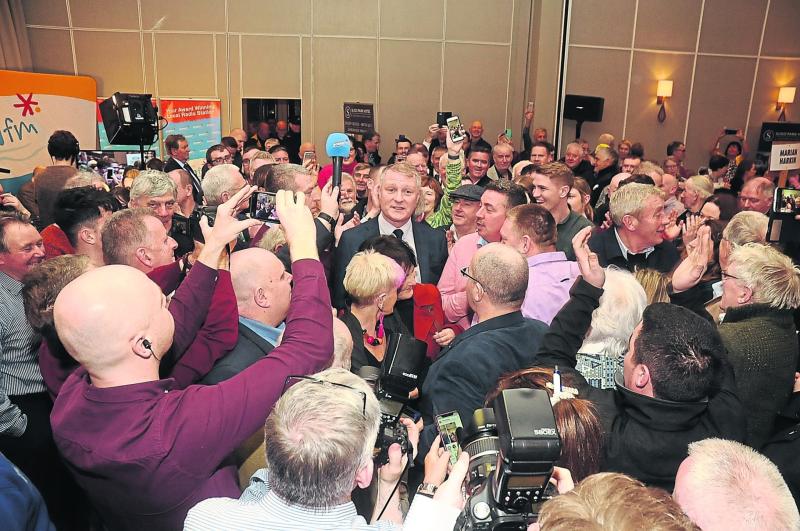 Sinn Féin Deputy Martin Kenny is surrounded by supporters and members of the media moments before he was officially declared elected at the count centre Picture: Willie Donnellan

In a dramatic start to February a stark message was delivered by senior gardai in the Sligo-Leitrim Division to people who deal in the sale, supply and use of drugs that they have “blood on their hands” and are fuelling criminality.
Chief Superintendent Aidan Glacken addressed a meeting of County Leitrim Joint Policing Committee this month and warned against the silence in the community that allows the drugs trade to exist and flourish. Speaking about a section of the community from “middle Ireland” who decide to use a line of cocaine, he said, “You are fuelling criminality, you have blood on your hands.”
Election fever hit its zenith this month as the nation went to the polls on February 8 to select our representatives in the new Dáil. When the dust finally settled Sligo/Leitirm had elected four TDs namely Marc MacSharry (FF); Martin Kenny (SF); Marian Harkin (IND) and Frank Feighan (FG). Deputy Martin Kenny not only topped the poll but was the first officially elected with a landslide vote.
There was widespread shock and sadness at the death of popular Carrick-on-Shannon man, Hasib Allakarami following a road traffic accident on the N4 between Castlebaldwin and A member of the Kurdish community in Carrick-on-Shannon, Hasib was a popular young man who played underage soccer with Carrick Town FC and also underage football with St Mary's GAA Club. He had returned to Carrick Town to help coach teams in recent times. Hasib was studying sports in IT Sligo and was engaged to be married.
This month marked the final Leitrim's Health is Wealth event. In it's fourth year, the annual seminar, organised by former Leitrim Person of the Year, Hubert McHugh and Valerie Cogan, helped to not only encourage discussion around volunteering and mental health, it also helped to raise much needed awareness. At the final event over 1,000 people attended The Landmark Hotel to witness the culmination of four hard years of work by Valerie and Hubert.
Leitrim and Roscommon attracted national attention as then Taoiseach, Leo Varadkar visited flood impacted areas around Carrick-on-Shannon and other parts of South Leitrim this month. Business people and residents expressed their frustration that more wasn't being done to prevent ongoing and financially draining, impacts from flooding in the area. They called for an immediate solution to be found to the issue and stressed that they could not endure further repeats of past flooding events.
Finally, in another dramatic finish to the month, former county councillor, John McCartin, who is a QIH director, revealed that his family had been informed they were targets _ “It has been made known to me that our families are legitimate targets.”
The comments came following yet another arson attack, this on the house of a relative of the QIH directors in Derrylin and five months after Director of QIH, Kevin Lunney was abducted and attacked.