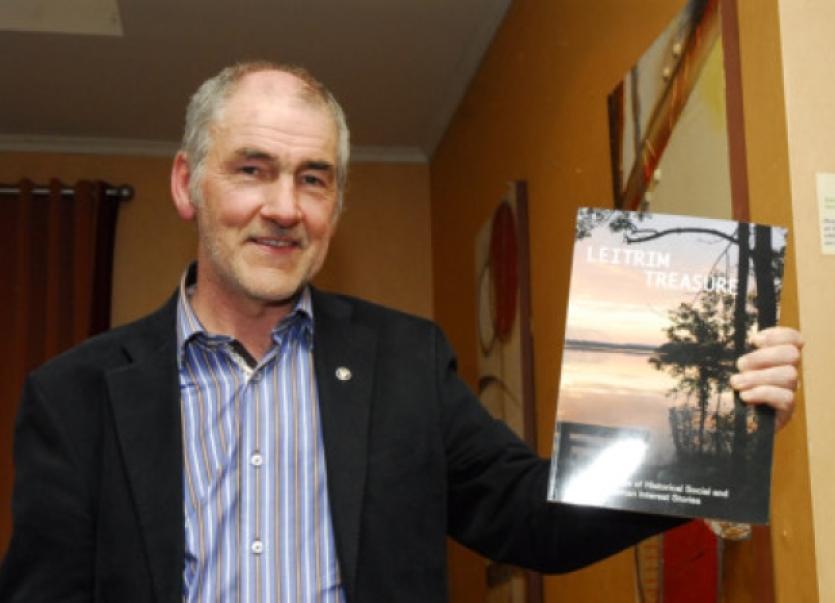 It is a great honour and privilege for me to have been invited to review “Leitrim Treasure”, a marvellous new book published by the Sliabh-an-Iarainn project committee, who have already published four such wonderful books: Mountain Echoes, Mountain Shadows, Mountain Roots and The Head Sheaf.

It is a great honour and privilege for me to have been invited to review “Leitrim Treasure”, a marvellous new book published by the Sliabh-an-Iarainn project committee, who have already published four such wonderful books: Mountain Echoes, Mountain Shadows, Mountain Roots and The Head Sheaf.

This collection recalls the story of the mountain people on Sliabh-an-Iarainn. Now this enthusiastic committee has joined forces with the county wide contribution to the national initiative for the Year of the Gathering, hence their new publication “Leitrim Treasure”.

How apt the title “Leitrim Treasure”! for this is a phenomenal book. The reader will find that it even surpasses the acknowledged acclaim of the four other publications. This new book will be the “Knocknagow” of Leitrim.

It will be treasured by Leitrim people everywhere, not alone in the county but in every Leitrim household where ever Leitrim people, and their descendants, are to be found throughout the world.

“Leitrim Treasure”, subtitled “Generations of Historical Social and Human Interest Stories” is extraordinary in that within its 249 pages, with over one hundred stories, it traverses centuries of Leitrim life, touching the lives of people in parishes and communities in every part of the county, from the Atlantic shores of Tullaghan to the distant borders of Cavan and Longford below Newtowngore and Carrigallen.

As we journey through the centuries of history we learn, with sorrow, of the travails of the poor downtrodden people of Leitrim; such indescribable misery and wretchedness; their sufferings, hunger and hardships living beneath the despot, Lord Leitrim. We learn how the horrors of the famine and the trail of emigration that followed which decimated the population and left sorrow and pain in its wake.

Thankfully, these stories take up a small, but necessary part of the story of Leitrim in the book. The rest of it, and much the greater part of it, is a celebration of how these resilient people rose above their afflictions and misfortunes; how they triumphed through their deep faith, their neighbourly spirit, their love and generosity, their courage and determination, moulded by their experiences and by the rugged and harsh, but beautiful environment.

Thus there are several stories in the book, heart warming stories, written by the descendants, and the themes in all of them is the awe, love, homage and gratitude each writer has for their great-grandparents, grandparents and for the County Leitrim of their birth.

The reader will forever cherish the sentiments in “Back home in Ireland” (James T. Owens), Neal Shine’s “Wish Granted”, Nora Bohan’s “The Titanic sailed without Him” and Seán McPartlin’s “Faithful Support”.

Nora Bohan ends her story with “The Ireland of James and Patrick may be long gone but the spirit, pride and vitality of those generations still flows in our veins. Our sense of heritage and home makes us seek to know and keep those deep connections with our Lovely Leitrim.”

Throughout “Leitrim Treasure”, we feel that “spirit, pride and vitality” that Nora speaks of, as we read about so many wonderful people and their achievements at home, and in many parts of the world.

We see that it is that spirit of pride, accompanied by love and generosity and unselfishness, values ingrained in them by families and communities, that motivates so many Leitrim people.

In Rev. Peter Conefrey’s fascinating story “Aunt Biddy goes to Dublin”, one cannot but marvel at the confidence of Biddy O’Reilly as she demonstrated how to “Scotch flax on Stage” in Dublin, in 1939, at the Horse Show in Ballsbridge and how “Biddy became a lecturer for the titled dignitaries, University professors etc., notwithstanding that it was her first visit to Dublin” and Mohill was probably the furthest she had ever been from her home in Cloone.

It was that wonderful spirit, love and generosity that propelled Margaret of New Orleans, described as a “mother of the motherless. She was friend to those who had no friends. She had wisdom greater than schools can teach and we will not let her memory from us.”

What an uplifting, yet humbling story. It was that wonderful spirit of love and generosity that motivated Oonagh Shanley-Toffolo, whom we read of in “Dewy Fields, Filthy Streets and Royal Palaces.”

In that lovely, tender story, “My First Kiss” by Andy McGovern, Helen told Andy “Never count the times you fall, but the times you get up.” That is the spirit of so many people in County Leitrim that we read of in the book. It must have driven on the Cumann na mBan, the Volunteers, the patriots, the footballers and football teams, the entrepreneurs, the farmers, the housewives.

How accurately the lines from Longfellow, quoted in the article on Joseph Dugdale, sums up his life,

Onward through life he goes

Each morning sees some

Each evening sees it close.

Has earned a night’s

Recognising not just the beautiful landscape, but also its people, the novelist and broadcaster wrote, “I am not a Leitrim man myself, but for me it is one of the loveliest and friendliest places in Ireland, and if it were never rich it would still have that attraction.”

Throughout this short review one cannot comment on all the wonderful stories of wonderful people and events that lie within the pages of this unforgettable book. I hope that in my own limited way I have conveyed the proud and joyful feelings that one can grasp of the spirit, generosity and values of brotherhood and faith that radiates from its pages.

In the last few lines of the book, Jim Murphy, in his story “Home Again” writes: “Without my realising it, Ireland had been one of my parents’ gifts to me; perhaps without their ever intending it as a gift, but here it was.

“A white washed cottage in Leitrim, with no running water, three rooms, a central fire in this place where my Dad and Aunts and Uncles of my growing up, were all born. All along on that trip I had thought I was taking my Dad home, now I know he was showing me my own starting place, he took me home.”

What an extraordinary treasure! This book will have to find its way into every Leitrim home, everywhere in the world. So that generation after generation will know their rich heritage that is Leitrim and its people.