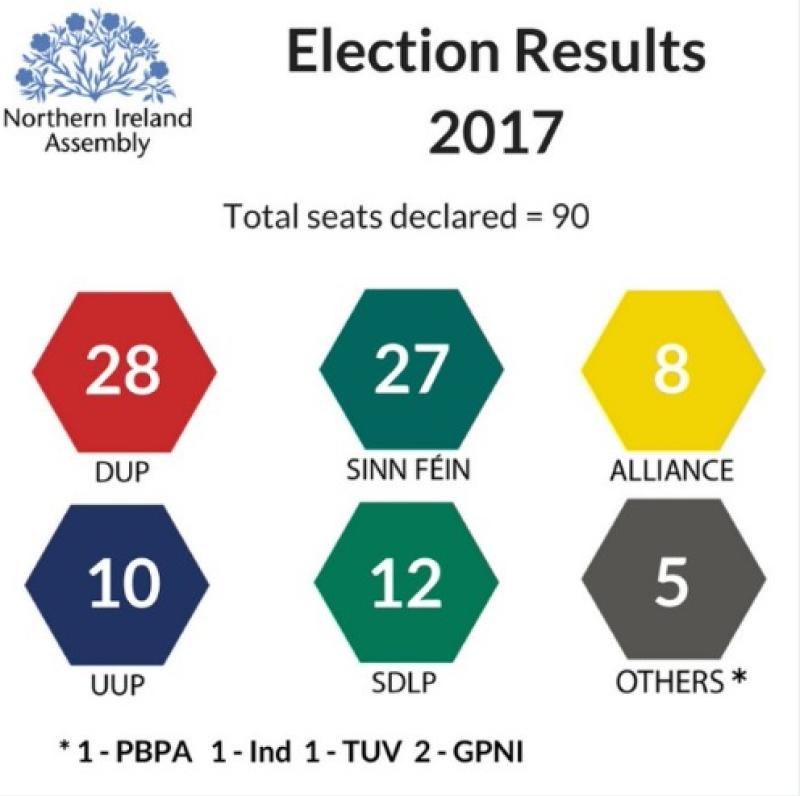 Nationalism made major strides at the expense of unionists in the Northern Ireland Assembly elections yesterday.
Unionists have lost their long enduring and highly symbolic overall majority in the chamber.

Ulster Unionist leader Mike Nesbitt announced his resignation after a poor showing, while DUP leader and former first minister Arlene Foster will face scrutiny after her party fell below the threshold to trigger a contentious Stormont veto mechanism.

The DUP have 28 seats, Sinn Fein had 27, SDLP 12, the UUP 10, the Alliance Party 8, the Greens 2, People Before Profit 1, the Traditional Unionist Voice 1 and Independent Unionist 1.
The nationalist SDLP fared better than many expected, replacing the UUP as the third largest party in the Assembly.

The results may be rendered moot if the main parties fail to a strike a deal to form a new powersharing executive within three weeks.

In neighbouring constituency Fermanagh South Tyrone, DUP Leader Arlene Foster topped the poll and was elected on the second count with 8754 votes. Sinn Féin's Michelle Gildernew and Jemmas Dolan were elected on the third count.

Sinn Féin's Sean Lynch and UUP Rosemary Barton were elected on the forth count, without reaching the quota. DUP Maurice Morrow and SDLP Richie McPhillips both fell short of being elected.