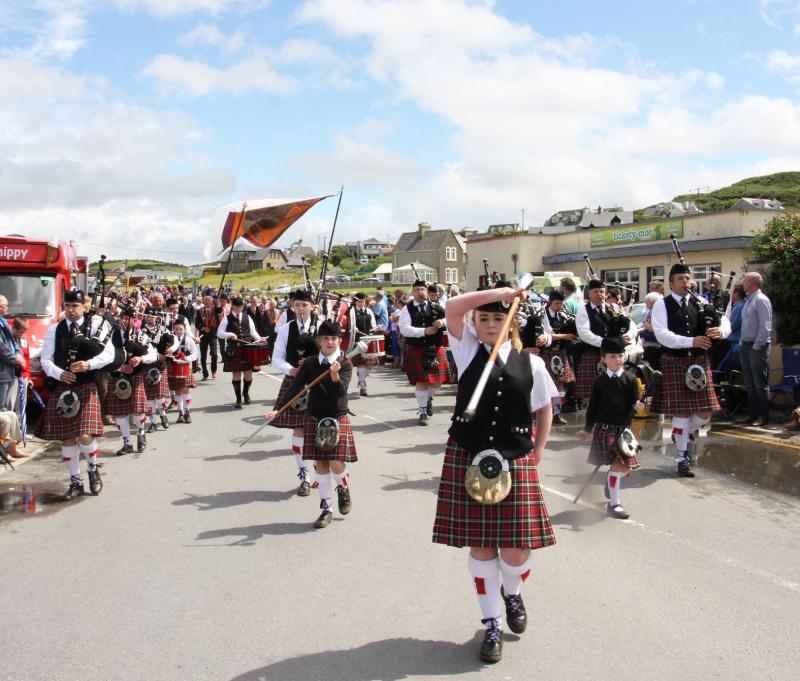 The Moyne Band at a Twelfth parade in Rossnowlagh. INDD 1107 Twelfth 2 MVB

The Grand Orange Order in Leitrim joined  lodges from Donegal, Cavan Monaghan in Rossnowlagh, yesterday, July 8 for the annual Orange Order parade in the Republic of Ireland.

The parade opens up the marching season in Northern Ireland, with parades across the north expected on July 12.

DUP leader Arlene Foster was in Rossnowlagh yesterday as the traditional event basked in the sunshine with large crowds of particpants and people who came to see the spectacle.

Lodges from Donegal, Cavan, Leitrim and Monaghan, as well as visiting Orange men and women from Dublin and Wicklow, Northern Ireland and further afield enjoyed spectacularly good weather, the sun beaming down as the marchers made their way from St John's Church to the field where they participated in a religious service where the sermon was delivered by Robert Campbell, County Antrim Deputy Grand Chaplain.

Around 50 lodges from Donegal, Cavan, Leitrim and Monaghan, as well as visiting Orangemen and women, took part in the parade.

The Twelfth in Donegal has been held in Rossnowlagh since the 1900s and has taken place there every year since 1978. It is traditional to hold the parade on the Saturday before the main Twelfth parades, meaning lodges in the Irish Republic can attend the Twelfth demonstrations in Northern Ireland.

There are over 40 Orange halls in Donegal, Cavan, Monaghan and Leitrim and the Grand Orange Lodge of Ireland has members in nine counties in the Republic.