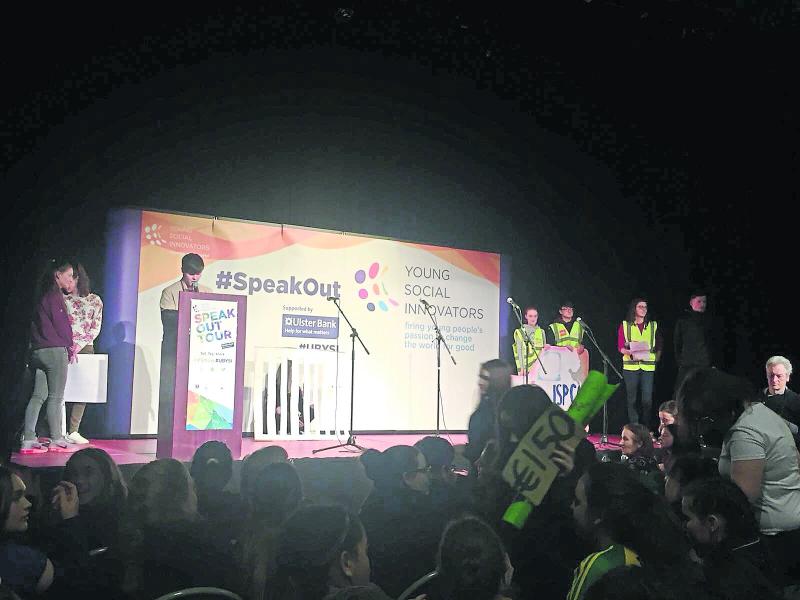 Students at Young Social Innovators Speak Out in Ballybofey.

Physics Trip
The Institute Of Physics (IoP) sponsored an event at Sligo IT featuring James Soper who is an internationally renowned science presenter.
He is also an ex-professional circus performer and uses many of his juggling routines in his fast-paced and interactive show.
Students were challenged and inspired to look deeper at every day observations and modern technology where physics can help to explain and apply phenomena in useful and resourceful ways.
We thank Mr Hewston for organising this trip and to Ruben Lewis who demonstrated, to over 300 spectators, Galileo’s observation that all objects do fall at the same speed!

Home Economics
1st years began their Home Economics Textile Briefs. There sewing project will account for 20% of their Summer Exam.
Over the next few weeks, they will learn tacking, hemming, blanket, chain and satin stitches. This week we mastered the basic skills of threading a needle, pinning and tacking.

English Trip for Senior Students
On Tuesday the 27th of February Ms Benson, Mr Hughes and Ms Faughnan travelled to the Helix in Dublin for a showing of Macbeth. “The entire production was fantastic. Students loved the use of acting, lighting, video and music to convey the play.

Under 15’s Ladies Soccer
Ms Gallagher’s under 15 soccer team came out trumps on Tuesday the 27th and now progress to the Connaught finals.

Junk Kouture
Best wishes to Avril Carty, Javotte Hanlon and Rachel McPartlin whose entry for Junk Kouture who take to the stage in the Helix in Dublin on Wednesday the 7th of March. The entry titled Celtic Couture is designed using rushes, old bed clothes, nets and leaves.
Celtic Couture captures Ireland in an outfit! Using strong historic Irish figures such as Countess Markievicz as inspiration we produced a design that incorporates our Irish culture and in particular the strength of Celtic women.
Their design and materials used depended on old Irish traditionally women’s life skills from the past like knitting, sewing and weaving. We depended greatly on nature where we sourced our leaves and rushes. Local shops also let us use their waste products for our design.
“We wanted to get away from the fast fashion culture that is ever so present in the 21st century. We wanted to create a design that was special to us and unique.
Our idea is especially relevant as 2018 is the year of Cultural Heritage in the EU.” Best wishes to the girls and to their teacher Ms Conaty and Ms O’Gara.

Mini Company
Best wishes to Ms Gallagher and 1st, 2nd and TY students who compete in the County final of the Student Enterprise Awards on Tuesday the 6th of March. The school will be represented by 10 of its 35 mini companies in operation this year.

Athletics
Congratulations to all students who competed in the Connacht Indoor Athletics Championships at AIT Arena Athlone on Sunday the 25th of February. Well done to all prize winners. Connacht school’s cross country in Calry postponed from February the 28th due to the bad weather.

Young Social Innovators
On the 27th of February, 25 transition year students who are part of the Young Social Innovators attended their regional SpeakOut in Balor Arts Centre, Ballybofey. This event gives students a great opportunity to advocate and speak out about issues of concern to them as well as a chance to listen to other students from various schools.
One group from St. Clare’s raised awareness about animal cruelty and the existence of puppy mills entitled “Paws and Listen” while another group voiced the importance of mental health in teenagers, “That’s Mental,” Both groups put forward a heartfelt campaign for each of their chosen issue.