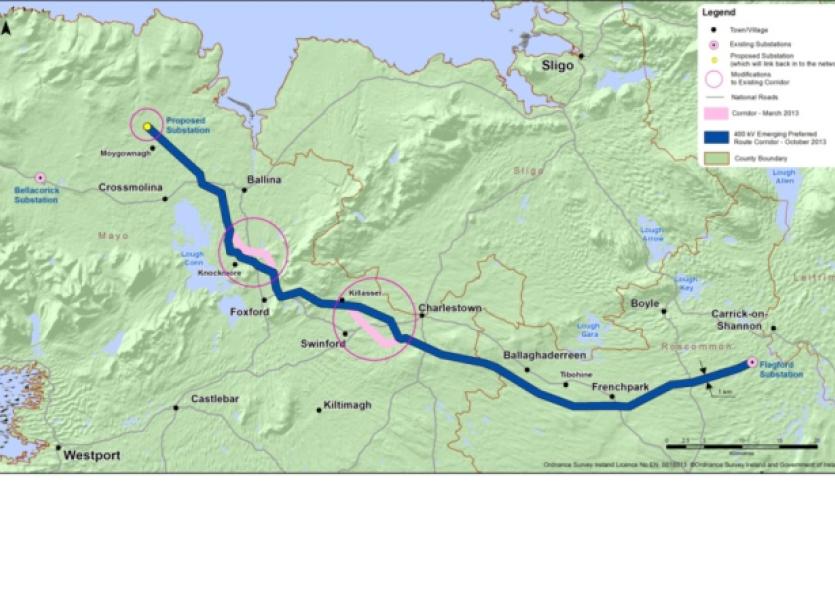 EirGrid has announced the emerging preferred route corridor for the Grid West project.

EirGrid has announced the emerging preferred route corridor for the Grid West project.

The chosen 1km wide corridor, which will accommodate a new 440kV power line, starts north west of Moygownagh, runs west of Ballina, east of Foxford and Swinford, south of Charlestown and Ballaghaderreen before linking into the existing Flagford substation, near Carrick-on-Shannon. A total of 16 route corridor options were studied in the Study Area, which covers parts of Galway, Leitrim, Mayo, Roscommon and Sligo.

The €240 million Grid West project will develop a new high capacity power line linking North Mayo to Flagford in Co Roscommon. By connecting the electricity generated by the region’s huge renewable energy resources, the project will facilitate significant job creation and investment as well as contributing to national recovery and growth.

An open day will be held in The Landmark Hotel, Carrick-on-Shannon on Thursday, October 24 1-8pm. The public and communities are encouraged to engage with the project. EirGrid will then commence engagement with landowners within the corridor to identify a possible line route and substation locations, which will be the subject of further public consultation next year.

Following consultation with landowners and further technical work, EirGrid will set out an indicative line route and substation and tower locations within the emerging preferred corridor in the next report, the Stage 2 Report, in the middle of 2014. This will then be presented for further consultation with the public.