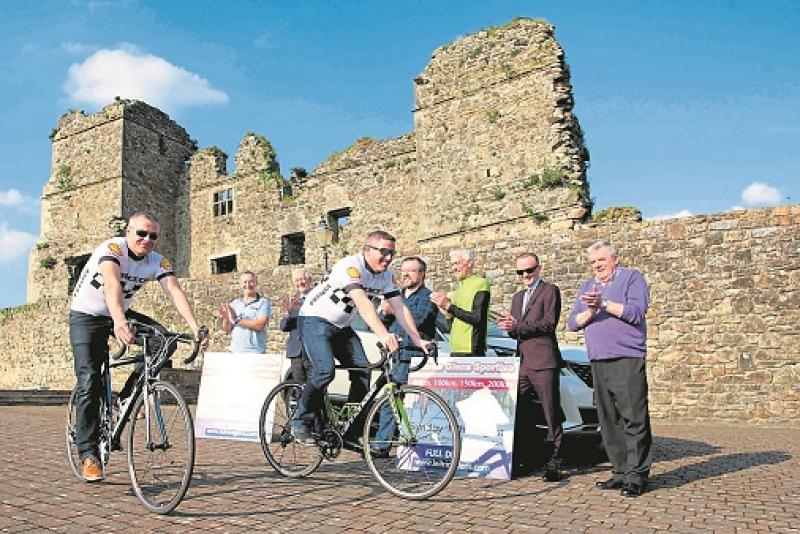 Ready for the off at the launch of Leitrim Glens Sportive.

The sun beamed down, as the bikes were parked outside the stone castle café, Peugeot jerseys hanging on the counter top in a scene that wouldn’t be out of place in a French hamlet during the Tour de France. You’d almost expect Stephen Roche to walk in.

But this is 2018 and Manorhamilton Café in the May Leitrim heat wave and the whirl of activity is for the launch of the Leitrim Glens Sportive coming in August 19.
The Leitrim Glens Cycling Club has plenty to be proud of organising the Leitrim Glens Sportive, which will now increase their number of cycles to four introducing a 40km leisure cycle along with 100km, 150km, and 200kms route according to Seamus Mc Gowan, its Chair. The Chair heaped praise on his club colleagues Austin Mc Manus, Club Secretary and Vincent Gilgunn, Treasurer for their work. But there were other things to celebrate too, including a country first. Thanks to successful Leader Rural Development Fund grant aid supported by Leitrim Development Company, the cycling club has made a dream become reality spearheading 24 new cycling signs along the route adding to the cycling infrastructure of Leitrim. The signs, a familiar sight on the Continent, give cyclists information on gradient and distance and are a first for Ireland.

According to Padraic White, Chair of Leitrim Recreation Forum, speaking at the event, the cycling club ‘deserve great credit they had the “vision to make something different” and now produced “iconic signs’ that are “distinctive” and different. He sees them as adding to the great package that Leitrim has to offer including its new greenways and floating boardwalks and fitting well with Failte Irelands new wider tourism initiative in “Ireland's Hidden heartland” adding to Leitrim’s leisure activities, cycling and walking. After pledging on-going Recreational Forum support for the growing project, he commended the collaboration work between the private and community sectors. Much of that collaborative was there too supporting the launch.
Two of Leitrim Glens Cycling Club's other new partners spoke. Kevin Egan Cars from Sligo are putting together a sponsorship package with their cars and head turning Peugeot cycling jerseys. Also attending was MS North West Therapy Centre Sligo. the new charity beneficiaries for the Leitrim Glens Sportive. Vincent Hunt works on the Voluntary Fundraising committee, manages the shop and also uses the service having lived with Multiple Sclerosis for the last 24 years. MS, he describes, as “the silent traitor” one day you might be fine, the next you aren’t.

MS, he describes, as “the silent traitor”

Due to the damage on the insulation of nerves, Multiple Sclerosis he explains means messages don’t get where they need to and it can affect many different parts of the body.
The service provided by the centre is a lifeline for many in the region, one of only two in the country providing essential services that don’t involve long waiting lists, of physiotherapy reflexology, massage, aromatherapy and counselling he explains.
A new respite centre in Woodhaven, the majority of which was built through fundraising by the local community also gives both carers and clients a chance for a break or holiday. Hunt describes how the MS North West Therapy centre is like a second home for many where people can support one another.
“If you are having a bad day, there’s someone in here who might be having a good one that can give you support.” And that support is something you can also return to someone else on another day, he says.
However, with an annual funding shortfall of 120,000/130,000 the MS North West Therapy centre relies on fundraising to provide its core service and Leitrim Glens Sportive offer of support is a welcome lifeline.
The Leitrim Glens Sportive event is on August 19. For more information see http://leitrimglens.com/
Cyclists can avail of a special discount if they book in advance on https://www.eventbrite.ie/e/leitrim-glens-sportive-tickets-44469241699.

For more of our top sporting stories see here