The possibility of Peace Plus funding could be a lifeline to restore Manorhamilton Courthouse.
The building has become an “eyesore” after being derelict for over 20 years.
Cllr Frank Dolan asked Leitrim County Council what communication there has been recently in relation to the courthouse.

He said, “It is a shame to see this building standing idle and going into dereliction. Now that there is a possibility of funding under Peace Plus coming on stream, pressure should be brought to bear on the court service to do something with this building.” 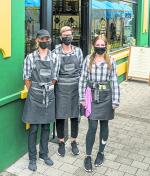 Leitrim County Council stated it has had no correspondence with the Court Service in this regard.
However, through the work of the Manorhamilton Town Team some communications have taken place and there is “an aspiration indeed to see the building come into productive use in the future depending on identification of resources and appropriate project.”

Cllr Dolan said he wants to see the Courts Service hand over the building to the community. He asked “Why hold on to it if it is not in use?” He said it could be a “huge asset” to the town.
Cllr Felim Gurn said when Back of Ireland closes in October there will be four vacant buildings on the main street of Manorhamilton.

It was suggested that the building could be used in conjunction to the SLNCR Greenway or with the arts community.
Cllr Mary Bohan said there is a precedent there as the Court Service did hand over the courthouse in Drumkeerin to the youth group, who got a grant to restore and renovate it.
Cllr Sean McDermott said the courthouse is currently an “eyesore” in the town and said something must be done soon as every year the building lies idyl, the more it will cost to repair and restore it.

Some councillors also queried the progress on Ballinamore Courthouse but the Council informed the members there has also been no progress with Ballinamore Courthouse. The Court Service had previously indicated it would hand over the building to Leitrim County Council.
Manorhamilton Courthouse is a listed building, it is understood to have been built round 1835 and was in use as a courthouse over 20 years ago.
It is a major concern that this building on Main Street would fall into such disrepair it would be lost to the community.