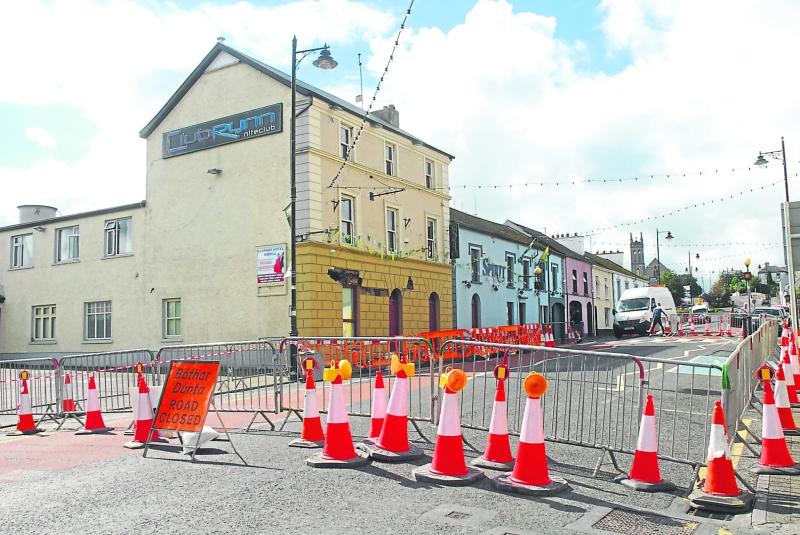 Upper Main Street, Mohill will be closed to traffic for at least two weeks following the partial collapse of a building facade on Wednesday, September 8.

Leitrim County Council are expecing a plan this week from the owner's engineers and will decide whether that is viable to protect the building in the long term. The council did suggest that works could take longer than the two weeks set out with building supplies in low demand at the moment.

The council say the situation remains “fluid” and they are continuing to work with the owner of the building to resolve the situation as soon as possible.
Officials from the Council met with the owner and his structural engineers last Friday to determine the condition of the building.
“Following this meeting a plan is being prepared by the owner's structural engineers to stabilise the building to prevent further collapse. In the interests of public safety, the R201 at Upper Main Street, Mohill, will remain closed to vehicular traffic for a period of at least two weeks or until such time as the remedial/stabilisation works on the building are complete.
“The footpath in the vicinity of the building concerned has also been closed, however the footpath on the opposite side of the street remains open.”

Traffic diversions will remain in place in Mohill for the duration of the emergency street closure, with a one way system being implemented in the town, as a temporary measure.
“Signage will be placed on the N4 advising motorists that Upper Main Street in Mohill is closed and traffic wishing access to Mohill from the N4 should do so via the Dromod roundabout,” noted the Council.

The Council hope to have a better time scale of the road closure by the end of this week, they are awaiting information from the owner's engineers and the local authority will decide whether those plans are viable.
“Our priority is public safety” the Council stated on Monday and noted the “havoc” traffic diversions are causing though residential areas.

Concert in Drumlish this weekend