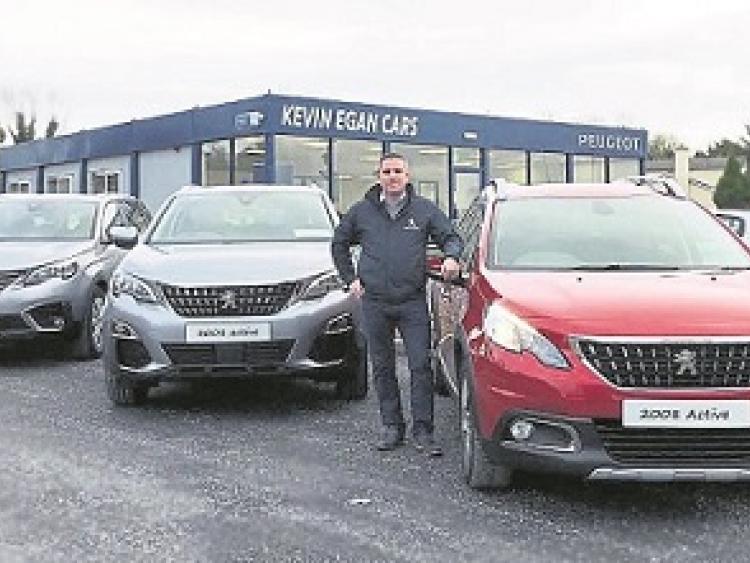 Kevin Egan pictured with some of the Peugeot vehicles on display at the new showroom on the Old Dublin Road, Carraroe, Sligo.

Kevin Egan Cars Peugeot was launched in January with the opening of their new showroom on the Old Dublin Road, Carraroe, Sligo.
This is an exciting new chapter for Kevin Egan Cars which sees them representing a major brand, Peugeot. It is also a major step for the Kevin Egan Cars brand as they went from an independent dealer to franchised.
The following is an interview with Kevin as he sat down to talk to the Leitrim Observer:
Q1. Kevin first of all congratulations on completing your first January as a newly appointed Peugeot Dealer! How was your first January in new car sales?
Kevin: I’m not going to lie, it was a busy start for Kevin Egan Cars, busier than I had envisaged.
The new Peugeot franchise combined with our new showroom now with roadside frontage (which we didn’t have before) led to both the staff and myself talking with more customers face-to-face this January than ever before!
The one comment that we keep hearing over and over again is ‘you have so many cars here, where did they come from’ to which we reply ‘we always had over 120 used cars in stock, just that they were hidden away, now they are nicely laid out and easily viewed along with the complete Peugeot Range’!
181 was definitely a learning curve for us as a team! Mistakes were made with deals that should have been done, not being done and others we lost money on being done.
This was mainly due to not taking the necessary time needed to consider these deals, but this has just made us stronger and better equipped going forward.
Peugeot are delighted with us! January saw our market share within Sligo rise from 0 to 7%, Peugeot currently rates number 7 within the county.
This is impressive considering our competition Hyundai, Toyota, Volkswagen, Skoda, Ford, Kia which all make up the top 6 spots within the county!
We look forward to climbing the ranks as the year progresses.
Peugeot nationally have risen by a phenomenal 70% on the same period last year and are currently rated number 9 in Ireland. This is largely due to the arrival of their 3 new SUV’s;
The Peugeot 2008 which was voted Irish Small Car of the Year 2017, Peugeot 3008 which was voted European Car of the Year 2017 and currently holds the title of Irish Car of the Year 2018 and finally the new Peugeot 5008 7-seater SUV, all of which boasts an eye-catching design and impressive technology!
Q2. Was it an easy transition from your used car background to now selling new cars?
The process of taking on the Peugeot Franchise while also moving to a new site was stressful, to say the least! Dealing with banks, mortgages, contractors etc. but we are now at our new site and most of those stresses are behind us, thankfully.
There is a lot to learn with the new Peugeot franchise with different finance deals, scrappage allowances etc. to remember but we are quickly getting the hang of it and enjoying the new challenges it brings!
This new venture also means that we now have someone to answer to and external targets to meet which we hadn’t previously!
This again is simply something that we are getting used to as we learn to work together.
Q3. What have you learned from your first January as a new franchised dealer?
Every day is a learning day with different problems and solutions! In short, January has been a massive learning curve.
We have learned a lot, the mistakes we made only helping to make us stronger going forward. We are delighted to represent the award-winning brand in the North-West of the country and look forward to increasing our market share both here in the north-west and nationally! The complete Peugeot range including the 3 SUV’S mentioned above are all onsite at our new premises at Carraroe, Sligo which we welcome each and every one of your readers down to both view and test-drive!