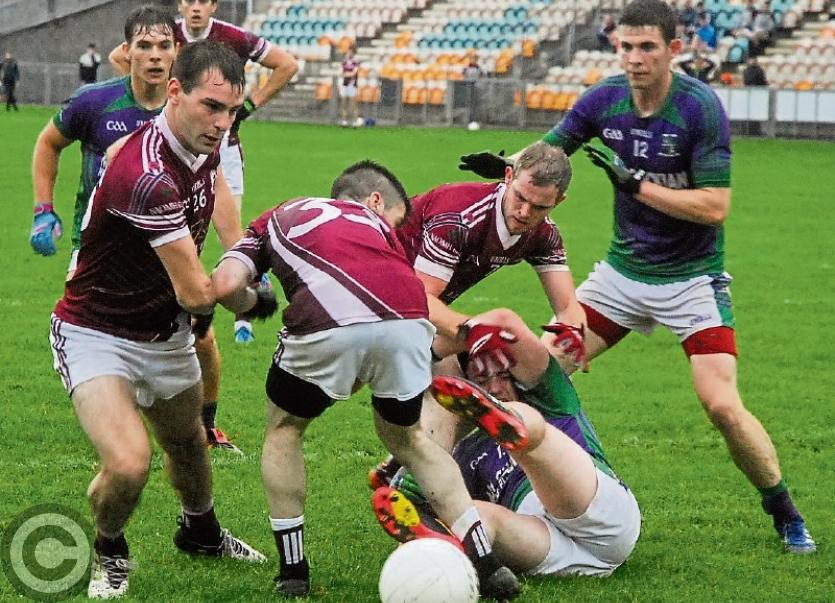 There it is! Drumkeerin and Leitrim Gaels' players pictured competing for a loose ball during last Saturday's Smith's Monumentals Intermediate Championship clash. Photo by Willie Donnellan

Kiltubrid, Eslin and Fenagh St Caillin's maintained their perfect starts to this year's Smith's Monumentals Intermediate Championship when they registered third successive victories last weekend while at the bottom of both groups the race is heating up to avoid the relegation semi-finals and clinch a place in the knock-out stages.

Questions may have been asked about whether or not Eslin would be able to replicate the form they showed in defeating the second string teams from Ballinamore and Mohill when they came up against tougher opposition but those doubts were cast aside emphatically as they saw off the challenge of Annaduff in Ballinamore on Saturday evening last on a scoreline of 3-5 to 0-11.

Despite that defeat Annaduff remain in third position in Group One and they look on course to advance to the quarter-finals with games against Kiltubrid and Ballinamore still to come.

Only scoring difference is keeping Eslin off the top in Group One with Kiltubrid leading the way after they got the better of Mohill in Pairc Sean on Sunday afternoon. It proved to be a comfortable afternoon for Kiltubrid who triumphed on a scoreline of 4-15 to 0-8.

As it stands Ballinamore occupy the final position in the race to claim a place in the last eight. Ballinamore claimed their first win of this year's competition when they defeated Carrigallen on a scoreline of 0-18 to 1-12, a significant defeat for the first string Carrigallen side.

Carrigallen, who reached the Quarter-Finals last year, are now in a real battle to make the knockouts stages, and Mohill are both waiting to pick up their first points of the campaign and will need a significant improvement if they are to avoid the relegation play-offs.

In Group Two, Fenagh St Caillin's continue to lead the way after yet another comprehensive win. After big wins over Ballinaglera and Cloone in the opening weeks, Aughavas were put to the sword last Saturday in Cloone on a scoreline of 3-14 to 0-11.

Leitrim Gaels remain in close pursuit of Fenagh after an impressive win over Drumkeerin (1-14 to 0-8) in Pairc Sean on Saturday evening last. Drumkeerin had impressed in their opening two outings but despite last weekend's defeat remain on course to advance to the last eight.

Cloone registered their first win of the Championship thanks to a spirited second half revival against Ballinaglera to emerge victorious on a scoreline of 3-6 to 0-12.

Cloone face Aughavas and Leitrim Gaels in their final group games in the knowledge that two wins would see them advance to the quarter finals. However, should they slip up, Ballinaglera, who have yet to face Drumkeerin and Aughavas could be able to capitalise and capture fourth position in Group Two.

For Aughavas, it has been a difficult campaign thus far and a quick return to the Junior championship looks on the cards.