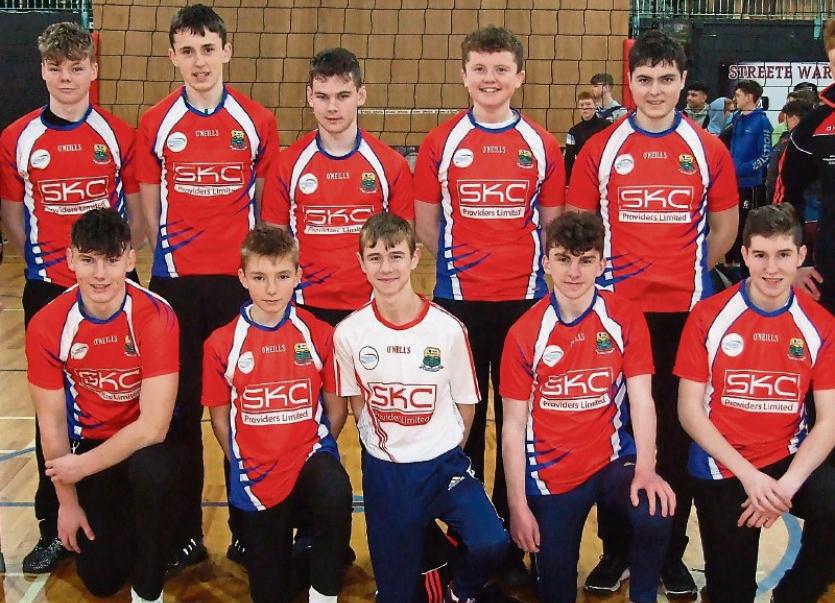 This is becoming the Drumshanbo team that refuses to give up!

Back in October, with full squad including two internationals, they played very well. Then in December, minus the permanent loss of international Dylan Easterbrook and four others, they held out very well and qualified for the semi-final.

Two days before this semi-final, they suffered the permanent loss of their other international, Emmett Moran, also due to a football knee injury, but somehow they manage to regroup again.

Drumshanbo lost to St. Raphael’s Loughrea in the Junior final two years 27-29 final set, and again this year in cadette 16-18. Last Tuesday in Streete Co. Westmeath, they finally turned the tables against this team, in a thriller.

Early on, the first set was nothing as one-sided as the score suggested. But, down 0-2 and 1-3, Drumshanbo showed the first signs when, newly reconstituted setter Evan Foley set his first set perfectly to captain Cathal McGourty, who pounded down the winner.

Conor Flood blocked and volleyed 2 winners and Radaslaw Oberwan spiked a winner in a move that started with a perfect save from Ronan Moran. Drumshanbo led 7-4. Back came Loughrea to lead 8-7 and 9-8.

This run only ended with a disarming flick from Foley. Blocks and tips from Oberwan and Brendan Gunning put Drumshanbo 12-11 ahead but it was level 12-12.

Then, the story changed. Moran served six in a row. A Gunning spike winner brought it to 15-12. There followed a marvellous rally. McGourty pounded at the net. Raphael's defended brilliantly and counter attacked.

Gunning, Sean Moran, with a marvellous run away off court, and Oberwan saved the ball in turn. McGourty spiked another winner to leave it 18-12 and, with Gunning serving 6 in a row, McGourty totally dominated at the net.

Raphael's opened the 2nd set with a vengeance and led 3-0 from 2 winning spikes and an ace. But McGourty responded to leave it level 5-5.

Then, ominously, Gunning missed a serve after 37 consecutive serves in a row in the competition (all time third best in school history).

Raphael's shot back ahead with more spikes and aces to lead 8-5. Two magnificent saves from Foley ended that run and, in a run of 6 serves from Flood, including an ace, Oberwan spike twice and Drumshanbo led 12-9.

But then Drumshanbo missed serves and confusion gave Raphael's another breather and they aced 14-12 back ahead. A rally of 34 touches, over 1 minute long, followed and it took McGourty three hits before he won the point.

Gary Corcoran came on but still errors flowed until Drumshanbo trailed 16-20. A McGourty spike, an Oberwan block and a Foley ace brought it 20-21 but more errors allowed the Galway school leveled the match.

The final set was a battle royal. Top serving from Moran and Gunning gave Drumshanbo a 6-3 lead. Raphael's upped their game. Flood had to keep his momentum at top speed to save one point but Raphael's spiked with abandon to go 9-8 ahead.

Then, another Flood save and an Oberwan winner put the Leitrim school back ahead 11-9. Again, Raphael's rallied with a block and a controversial decision to lead again 13-12.

Once more the tide turned and, amid another controversial decision, Drumshanbo had three block winners from Oberwan, Moran and Foley, 2 spike winners from McGourty as Moran had a run of serves.

By then it was 17-14 and Drumshanbo held the lead from there. Raphael's came up to 16-17 but powerful Corcoran serves pushed to 20-16. The Foley Oberwan combination brought it to 22-17. Moran flick down a winner at 24-20 and Flood aced them into the final. Truly, a team display.