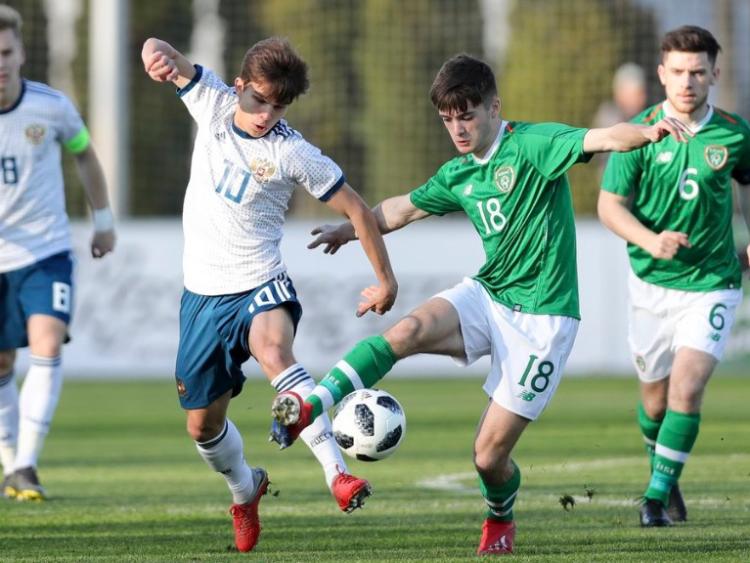 Niall Morahan in action for Ireland U19s against Russia on Tuesday last.

It has been an interesting and eventful few days to say the least on the domestic football scene with a number of excellent achievements by local clubs, schools and individuals but unfortunately these will, to some degree, be overshadowed by the sorry mess that has surrounded the head honcho of the national football association.

St Clare's CS more than played their part in an absorbing Connacht final last Wednesday, narrowly losing out to Coola VS, just a few weeks after the school's girls fell just short in a national final.

On Sunday Manor Rangers' senior team qualified for the final of the Glasshouse Cup courtesy of a 6-0 win over Ballymote Celtic.

Peter Maguire made the step-up to U17 level with Sligo Rovers while Eanna Clancy and Patrick Montgomery both made their U-15 debuts with the Bit O'Red.

Josh Cullen, whose family hail from Manorhamilton and Blacklion, took a step closer to a senior international debut when he was called up from the U21 squad for the first games of the new Mick McCarthy era.

The most noteworthy of all local achievements in recent days was former Carrick Town player Niall Morahan making his Ireland U19 debut as a substitute in the victory over Azerbaijan in Russia on Saturday morning. Ireland's 3-1 victory meant they became the first team, after host nation Armenia, to secure their place in this summer's European championships. Niall then started Ireland's final qualifying game, against Russia and helped his country to a 2-0 win.

These achievements are the result of many hours of hard work from many people. From the footballers themselves to their parents, coaches, teachers and volunteers at their respective clubs it is fair to say it is a collective effort and the successes and achievements are a deserved return for all that hard work. The volunteers who help keep the show on the road throughout the county and indeed throughout the country do so with no ulterior motive other than to help out with their local clubs and teams.

From driving players to matches and training, washing kits, and coaching youngsters, these are the jobs that are done quietly in the background for the benefit of others; certainly not for any sort of financial gain. Ultimately there can be no financial gain because local clubs and organisations are run on a shoestring budget and fundraising is what keeps them alive.

The contrast between the hard work that is done at grassroots level 'for the love of the game' and the revelations about the financial affairs at the top of the game are what many find particularly galling.

Much confusion remains about why a bridging loan of €100,000 was needed by the association from their chief executive when the annual rhetoric from the agm would suggest that everything is rosy in the garden. It is also less than clear why an association who award relatively paltry prize money to the club's competing in the national league felt generous enough to pay €3,000 a month, in addition to a significant salary, to cover the rent of the CEO.

The FAI undoubtedly suffered during the financial downturn but for too long clubs at local and national level have had to make do with crumbs from the top table.

The annual 'festival of football' where the top brass visit a different region every summer (as they did in Sligo/Leitrim in 2015) has illustrated just how much groveling is necessary in order for clubs to get a fair slice of what they are entitled to. Over the course of a week dignitaries, administrators and former internationals travel to clubs in the respective regions for photo opportunities and to hand out cheques that helps keep everybody feeling a part of the much lauded 'football family'.

Questions need to be answered and no doubt they will be in time but the mess at the top of the game shouldn't take away from the great achievements that can sometimes slip under the radar.