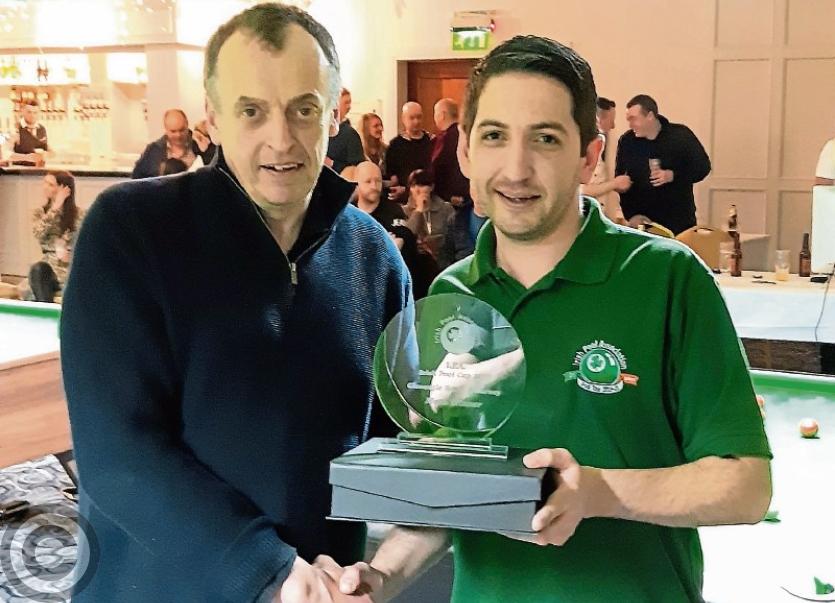 In the final Colin had a brilliant start as he cleared from the first three breaks, not even letting Cleary at the table. In the fourth frame Cleary potted the black early, Crossan 4-0 up. Cleary got one back, and the next few frames were tit for tat as they shared the frames.

In the 14th frame it was Cleary to break, broke dry and Crossan took out the finish to crown himself the Irish Pool Cup champion 2019. This is Leitrim’s first ranking event win since Shane O’Hara’s reign as Ireland’s Number 1 back in the 2000s.

Kevin and Jamie went on tog to face Robert Brady and Declan Hough respectively. Jamie had a great start vs Declan going 4-1 up and this seemed to be substantial as Jamie just needed to keep plucking the odd frame to get him across the line. Hough broke it back to 7-6 but Jamie had an 8 ball clearance to win the match.

Kevin McWeeney was involved in a tight battle that was level at 7-7. In the decider Brady cleared from the break, having had six clearances from break in the match.

That meant Gaffney faced Brady in the final, Jamie had a great start going 2-0 up but Robert responded winning the next three. Jamie struggled to get a foot hold in the game and was not getting a good run of luck as Robert ran out the winner 8-3.

Well done to all our competitors, the last few weekends are showing the massive progress Leitrim Pool has made with their standard of pool as we have 5 players in the top 15 in the Irish Rankings.

In the U23s, Jamie Gaffney lost his quarter-final to Morgan Thomas 5.3. Lee McSharry faced Thomas in a very tight semi-final, Lee losing in the deciding frame.

The better news for Lee was that he had done enough to be crowned the Number 1 U23 player in Ireland as he finished top of the rankings. Also a massive well done to Maurice Sheehan who was also crowned the number 1 of the Over 50s rankings.

In the Over 50s event, John Barry and Maurice Sheehan both reached the quarter finals where they faced each other. Maurice went 4-2 up but John Barry reeled off the next three frames to win and progress to face Martin Rothwell in the Semi Final with Rothwell winning 5-3.

As this is the final ranking event of the season, some Irish team positions have been filled: Jamie and Lee have secured their places on the U23 squad heading to Blackpool at the end of June. Maurice Sheehan secured his spot as he topped the rankings in the Over 50’s.

On the men’s team, it is looking like Colin Crossan will make it as he placed 12th in the ranking but there are four of the U23 team ahead of him so he is eighth with Gavin Donnelly also in with a shout depending on who takes their spots on the men’s team.