A strong start to the Pool season 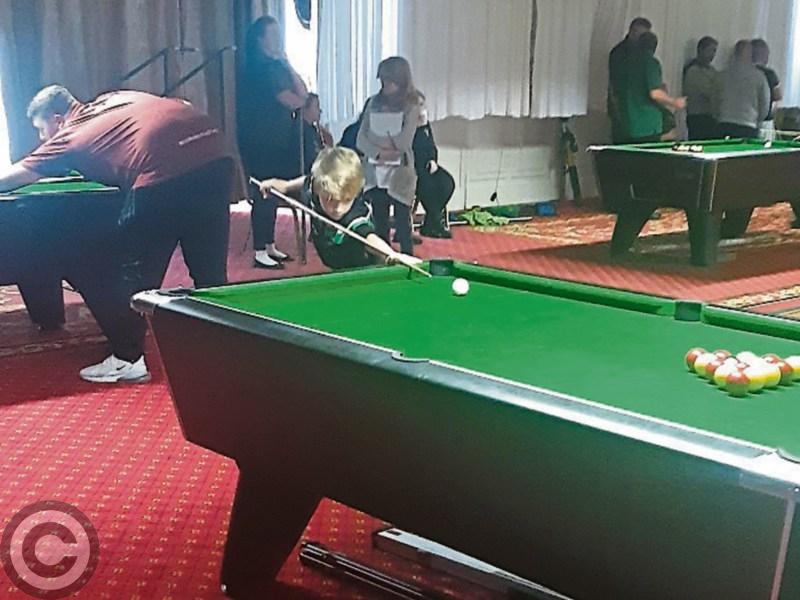 Last weekend saw the first Irish Pool Ranking event of the year in the Great Northern Hotel, Bundoran with Leitrim were well represented across all disciplines such as U15, U18, U23, Men and Over 50s.

All playing in different sessions across Friday night and Saturday morning looking to qualify for the last 32 on Sunday morning. We had the most players through to the last 32 with Jamie, Colin, Gavin, Kevin, Wayne and Maurice making six of the last 32. Unfortunately with such a large number through, two were bound to meet and they did as Gav met Jamie, Jamie starting stronger going 2-1 up but Gavin retaliated and won the next 5 frames including 2 clearances from break.

Kevin McWeeney lost to Laois’ Sonny Flanagan 6-1, Colin Crossan started slow going 3-1 down but bit by bit he lessened the lead and went ahead to win the match 6-4. Maurice Cullen was caught in a titanic battle against David McQuillan, going down in a decider with McQuillan winning the frame.

Wayne Kilmartin was 5-1 down vs Wexford’s Richie Furlong but managed to get it back to 5-5. After all the hard work it was unfortunate to lose the decider.

Through to the last 16 we had good friends Gavin Donnelly and Colin Crossan, Gav facing multiple Ranking event champion Stephen Dempsey while Colin faced Mayo’s Sean Conway. Gav started slowly going 3-1 and 4-2 down but got himself into the game at 5-4 but Dempsey kicked on winning 2 out of the next 3 frames to progress to the Quarter Finals.

Colin Crossan went from a poor start in the last 32 to one of the best starts you could see in a match, Conway cleared from break in the first frame but Crossan won the next 5 frames to go 5-1 up. Conway fought back to 6-4 but Crossan took out the frame to send him to the Quarter Final of the event.

In the Quarter Final Crossan faced Louth’s Cormac Kerr, Crossan started well with the match going 2-2 but Kerr kicked on winning the match 8- 2.

Lee McSharry lost out in the qualification stages but progressed to Sunday in the Plate event, Lee Beat Dave Delaney 4-0 and Marc Rowen 4-2 to reach the final Sunday. In the final Lee faced fellow Irish Under 23 team mate Adam Maher, the match was as close as it could get with Lee winning the decider.

In the Under 23 event we had one representative in Lee McSharry, he performed very well over the weekend beating Wexford’s Barry Synott, 5-1, in the Quarter Final he beat Ben Doyle 5-2 and in the Semi he beat Tyler O’Connor 5-3.

In the final Lee faced Cormac Kerr, Cormac started well going 3-1 and 5-2 up but lee fought back to 5-4 but Cormac took out the penultimate frame to beat the Drumkeerin man in another final.

In the Under 15 event and Under 18 event we had three representatives with Adam Casey of Drumshanbo, Eoin Philips of Kiltubrid and Colm Dwyer of Arigna. They all did Leitrim proud as they played in both competitions. A big well done to all.

The annual LPA dinner Dance will take place on Saturday September 14, in the Lough Allen Hotel and Spa, Drumshanbo at 8pm. Music by Alan Wrynne on the night followed by a DJ, it is set to be a great nights Craic. Tickets are now on sale through Dave on 0876490835 and are priced at a very reasonable €25.

The biggest pool event of the Leitrim pool calendar has to be the LPA Premier League. This year's league has changed slightly, all matches are first to eight frames, every one is given an appropriate handicap based on the ability ranging from -7 up to +4, you receive a bonus point for an 8-7 or 8-6 loss.

This is a very popular event and is suitable for everyone of all abilities. Each week there is one match allotted, time and date is decided by both players. To enter text Dave on 0876490835.

The Leitrim Pool Pub League will take place late October but entries are now open and can be made to Dave on 0876490835, this year the matches will consist of three sessions of five singles frames, with handicaps given to different teams depending on the number of county players each has either +1 or +2.

Matches will take place on a Thursday or Friday night depending on the home teams preference, for more information please do not hesitate to contact Dave.