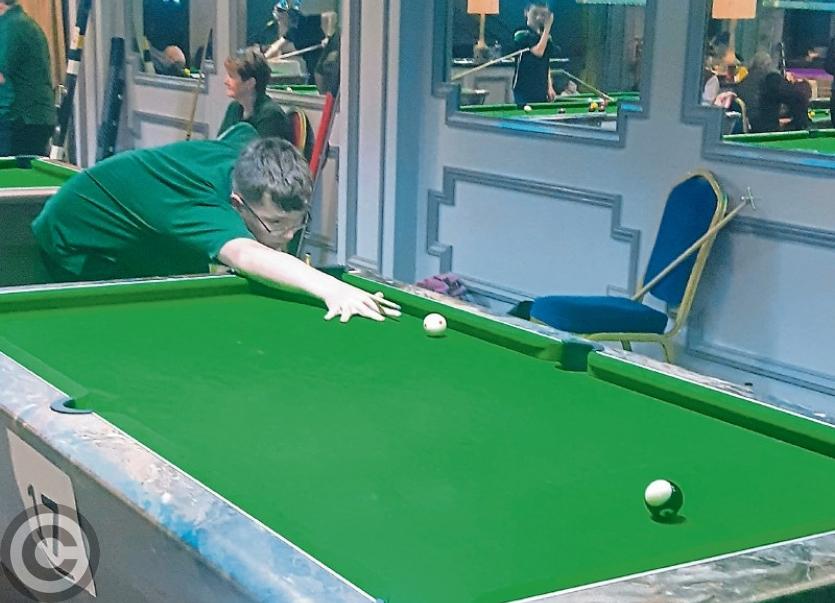 Drumshanbo's Adam Casey in action in the U18 event

Leitrim hadn’t the most successful weekend last week at the third IPA tour in Tullamore but overall we should all be happy with how the event went.

The stand out point of the weekend was Lee McSharry reaching the final of the U23 event but unfortunately lost to Cormac Kerr 6-4.

The Under 23s started on Saturday morning for Lee where he beat Kildare’s Keith O’Reilly 5-0 before beating Wexford’s Ben Doyle who had beat Lee in the Irish U23 Championship final last year but this time Lee had the win beating Doyle 5-3.

In the Semi finals Lee faced Irish team mate Adam Maher where he proved too strong for the Wexford man. In the final Lee took the lead going 2-0 up but Kerr bounced back to lead 5-2 but Lee mounted his comeback, winning the next two franes with great finishes to leave the difference at 1.

Lee went for a clearance from break but was very unlucky to snooker himself on the black. Well done to Lee on reaching another Final.

In the main event, Leitrim had nine players in a field of 246, a record entry for an IPA tour. Dave McWeeney and Lee McSharry were in action on Friday evening with Lee qualifying through a very tough draw beating Barry Hough & Chris Sunderland.

Hugh Kielty was not seeded but made it through in comfortable fashion beating Adam Maher and Alan Claffey on the way.

Saturday evening had the most Leitrim action. Gavin Donnelly & Kevin McWeeney lost out in the last round in the session but Colin Crossan beat Kevin to make the last 32.

Jamie Gaffney needed a good nights sleep as he didn’t finish playing until 4am on Sunday morningbut he lost out in the last round of qualification to eventual Semi Finalist Dave Gaynor.

In the last 32 we had Crossan, Kielty & McSharry in action. McSharry faced Dave McQuillan, a tough battle butLee was in the game at 5-5 but missed the black to win.

Crossan had a decisive 6-0 win over Kildare’s John Curran while Kielty beat Limerick's Neil Madigan 6-2. Crossan faced an inform Shaun Sharkey, losing out 7-3 but Kielty beat Ben Doyle 7-6 taking out a marvellous finish in the decider to tee up a match against David Gaynor.

In the Quarter Kielty struggled to get going and unfortunately lost 8-2 but had a great run for his first Tour event in 18 months.

Leitrim had more success in the Premier League on Friday night Kevin McWeeney took on Ofaly’s Pat O’Leary, Kevin went 7-3 down first to 8 but launched a come back and won the next 5 frames to win 8-7.

Finally in a highly anticipated match between Lee McSharry vs Robert Brady, Lee kept with Brady at 5-5 and went 6-5 down but found another gear to real off the next three frames and beat the Wexford man 8-6.

In the U18 and U15 events we had Drumshanbo’s Adam Casey, aged 14 Arigna’s Colm Dwyer aged 13 and Kiltubrid’s Eoin Philips aged 8.

Unfortunately the lads lost out by one frame in qualifying in the U15 event but in the U18 event Adam Casey went 3-0 down but bounced back to 3-3 and won the decider to win and line himself up in a match against the Irish Under 18 No. 1. Unfortunately Adam lost 4-0 but did himself proud with his great performance in both matches.