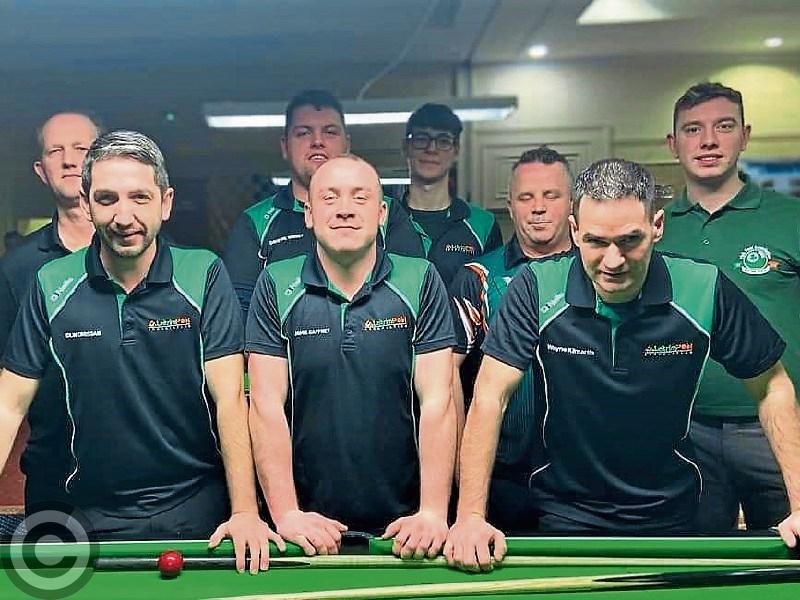 The Leitrim pool A team reached the final of the Northern Ireland seven man team Championship last weekend in the Armagh City Hotel where they eventually lost 11-4 to three-time All-Ireland champions Antrim.

Leitrim began their tournament on Saturday morning vs Tyrone D, Leitrim started strong going 4-1 up, Leitrim dominating the first half of the match but Tyrone fought back. The game was very tight and went to a decider which Leitrim unfortunately lost putting Leitrim into a no lose situation for the rest of the weekend.

In the second game, Leitrim had a slow start against Antrim B at 2-2 but a quick fire clearance from break by Colin Crossan got the team fired up and they only lost a single frame for the rest of the match beating Antrim 11-3.

In the qualifying match of the group Leitrim faced Armagh B, Leitrim knew they needed to get the job done. Leitrim took an early three frame lead and maintained it for the rest of the match, beating Armagh 11-7 to reach the Quarter final match vs Tyrone B.

Leitrim and Tyrone had very little between them at 4-4, until midway through the second session where Leitrim found another gear and managed to get to the hill at 10-7, Colin Crossan taking the winning frame for Leitrim to win 11-7.

In the semi-final Leitrim met Tyrone D again, this time Leitrim were better focused and determined. Leitrim went 4-1 up and tightened the screw even further by not allowing Tyrone to get another frame beating them 11-1.

In the final, Leitrim kept with Antrim 2-2 with wins from Colin Crossan and Jamie Gaffney, in the next few frames Leitrim had a bad rub of the green and fell 5-2 down after the first session.

Leitrim hadn’t lost hope yet and battled on getting two of the next four from Colin Crossan and Lee McSharry but Armagh showed their class defeating Leitrim 11-4.

Well done to the Men’s team on reaching the final, they performed well and won £400 for their efforts.

In the singles event, Jamie Gaffney and Wayne Kilmartin both reached the Quarter finals, Wayne played Richie Comiskey while Jamie faced Cormac Kerr. Wayne played well and did very little wrong while an essentially flawless Comiskey progressed on to the semi-finals beating Wayne 7-1.

Jamie was enthralled in a tight game and it was tit for tat from the very start. Jamie reached the hill first going 6-5 up but let an opportunity slip to win and allowing Kerr to win the frame, 6-6.

In the decider, Kerr had the first chance but fell short, Gaffney stepped in with little to work with but made himself a great chance but missed a very tough black. Kerr won 7-6 in the end.