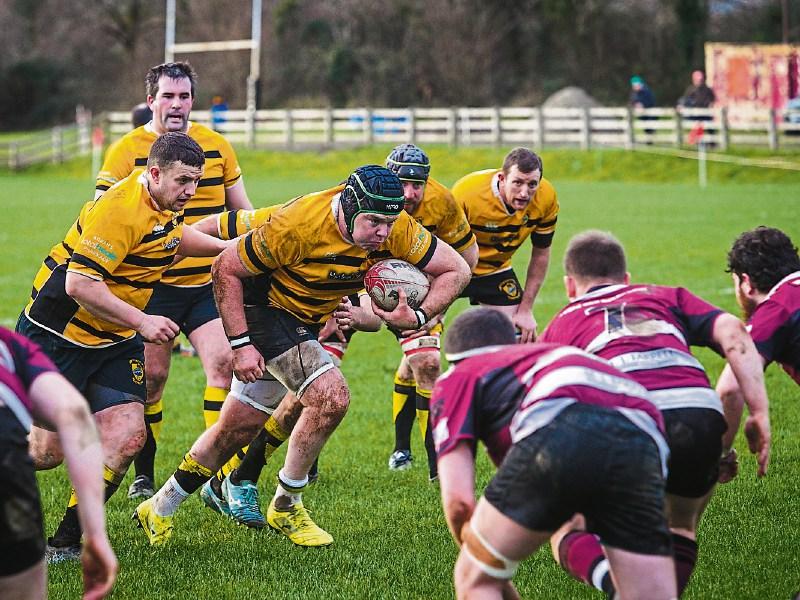 Carrick started the game extremely well and dominated the early exchanges and after a series of attacks lead by Peter Lavin and Shane McGuinness, scrumhalf Ruairi King identified that Creggs where short numbers on the blindside and after super hands from Joaquin Cueto Puento, the veteran Stephen Guckian scored in the corner. Unfortunately Conor Glancy failed to add the extra from the touchline.

Creggs closed the gap with a penalty on 14 minutes before a quick tap penalty close to the Creggs line saw Carrick's captain Shane McGuinness crash over from close range, unfortunately the extras were missed. On 16 minutes Conor Glancy added a valuable three points to extend the Carrick men’s lead.

However on the stroke of the water break a strike move from a lineout saw Creggs score under the post to leave the score 13 to 10 at the first water break.

Carrick dominated after the water break and man of the match Joaquin Cueto Puento was now having a major influence on the game with a series of huge carries that drove at the heart of the Creggs line.

On 24 minutes after huge carries from the Carrick eight, Peter Lavin scored, Glancy added the extras to leave Carrick ahead by 10. At the start of the second half, Creggs dominated the early exchanges and scored under the posts to leave only three between the sides.

On 62 minutes after a huge carry by John Healy in midfield Carrick broke through the Creggs defensive line and with Carrick having extra numbers out wide, slick hands from the Carrick backs saw Guckian score in the corner with Ruairi King adding the extras.

Creggs replied with a penalty on 65 minutes, before Carrick added their final score with a penalty from King. Creggs scored on 73 minutes to leave five between the sides going into the closing stages.

Carrick lost captain Shane McGuinness to injury in the closing stages and there was huge relief from coaches Sean McKeon and Tom McGuinness at the final whistle.